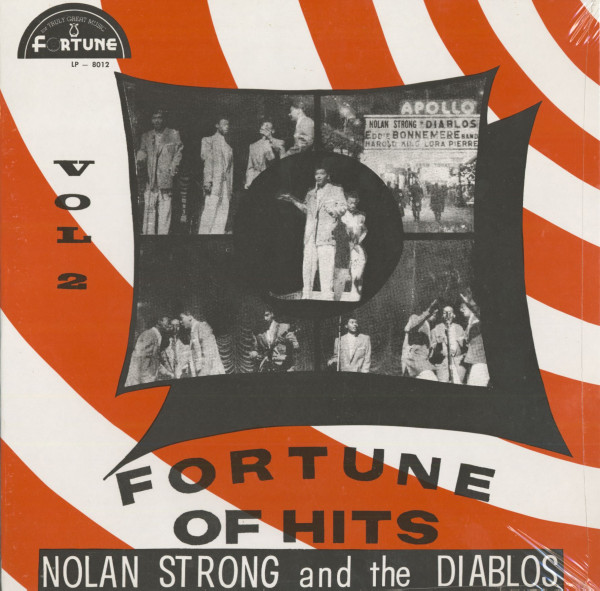 Nolan Strong with The Diablos

Nolan Strong (with The Diablos)

Mind Over Matter (I'm Gonna Make You Mine)

It had been a long time since Nolan Strong and his Diablos had come up with anything resembling a hit. Their only national R&B chart entry for Jack and Devora Brown's Detroit-based Fortune Records had come seven years prior with the spine-chilling The Way You Dog Me Around (it's on our '55 edition in this series), and they were best-known for their ethereal The Wind, out a year before that (the wondrous ballad graces our 1954 disc). But Nolan kept trying, no doubt buoyed by all the Motor City high tenors that cited him as a primary influence. Take Smokey Robinson, a Clyde McPhatter disciple who heard a lot of Clyde in Strong's tenor.

"He was a Detroiter, and he had that same voice. And when we'd go to see them in person, he'd sing a lot of Clyde McPhatter songs," says Smokey. "I had five idols. They were Clyde McPhatter, Nolan Strong, Frankie Lymon, Sam Cooke, and Jackie Wilson." Heady company, but Nolan's stratospheric pipes support the honor.

Strong was drafted into the Army in late '56, keeping him away from The Diablos for a couple of years. His brother, tenor Jim Strong, took over lead chores in his absence. When Nolan returned, The Diablos got back to business. They traded guitarist Bob 'Chico' Edwards for Walter Hamilton in 1959 and swapped bass singer George Scott for J.W. Johnson the next year.

The Diablos didn't receive co-billing on Nolan's 1962 Fortune single Mind Over Matter (I'm Gonna Make You Mine), but they made their presence felt as Nolan unfurled his heavenly pipes on a soulful rocker credited to Devora Brown (so are arranging and production duties). Fortune's mom-and-pop production values hadn't changed since The Diablos first strolled through the doors of the Browns' record shop/recording studio, but that only adds to the record's charm. A fragile cover of The Swallows' 1952 hit ballad Beside You sat on the B-side. Fortune put together a 'Mind Over Matter' album on Nolan that did co-bill The Diablos.

Despite strong airplay in Chicago and Pittsburgh, Mind Over Matter didn't make Nolan a star. Berry Gordy must have thought he could do better at Motown; The Temptations covered the song, their rendition issued as by The Pirates. Fortune kept releasing product on Strong and The Diablos for a couple more years. Perhaps there was a price to be paid for naming a group after Beelzebub; Jim Strong died January 29, 1970, aged only 34, and Nolan followed February 21, 1977 at 43.