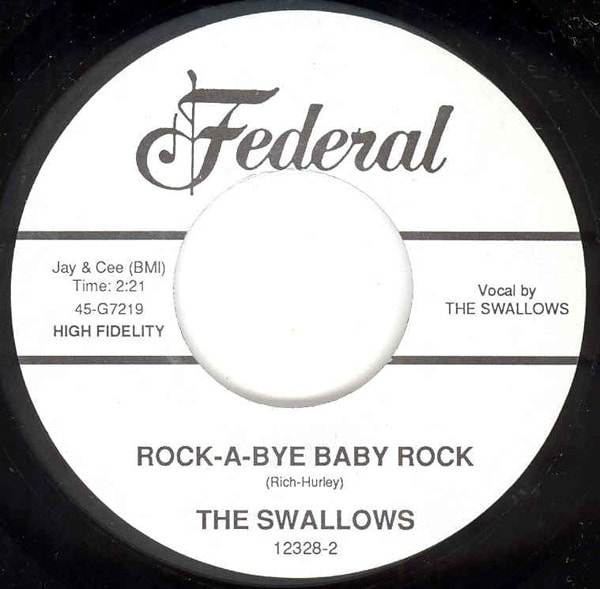 Swallows: Rock-A-Bye Baby Rock b-w In The Palm Of My Hands 7inch, 45rpm

The reason the Windy City's Flamingos had to change their name was because there was already a group of Swallows from Baltimore making national hits for King Records. They'd crashed the R&B field in 1951, their debut release Will You Be Mine a huge seller (it's on our '51 volume) with Eddie Rich their lead tenor.

The Swallows were a throwback to an earlier era in that they were a self-contained unit, playing their own instruments. Baritone Frederick 'Money' Johnson doubled on guitar, tenor Earl Hurley rattled the bongos, and bass singer Norris 'Bunky' Mack pounded some mean piano. Second tenor/baritone Herman 'Junior' Denby, who played bass in the quintet, took over lead duties for the group's next huge seller, the bluesy Beside You (you'll find it on our 1952 compilation). That caused a sea change within The Swallows that left Denby as primary lead until he was drafted into military service. Herman Williams, formerly of The Tilters, replaced him.

According to Marv Goldberg's amazingly comprehensive 'R&B Notebooks' website, when Denby traveled to King's Cincinnati studio on October 7, 1952 while on leave from the Marines, he was the only Swallow to make the session. Nonetheless, all six masters laid on tape that day came out on King as by The Swallows, sporting attractive vocal group backing. As before, Henry Glover sat at the A&R helm and wrote Nobody's Lovin' Me. Just like he had on Beside You, Denby affected a Charles Brown-influenced delivery on the bluesy theme, the group cushioning his lament with smooth harmonies and sealing the number off with a delicious coda.

Nobody's Lovin' Me was released in May of '53 with the ribald Mack showcase Bicycle Tillie, waxed by the group that March in New York (Denby was absent, fulfilling his military obligation), adorning the B-side. By the end of '53, The Swallows were gone from King, though Denby tried to launch a solo career there after exiting the Marines in 1954. The Swallows kept plugging away through several personnel changes, making a '54 single for Harlem's obscure After Hours logo. Shortly before they broke up in 1956, tenor Bobby Hendricks joined (he'd soon move up to the Drifters).

There was a postscript. Rich, Johnson, Hurley, new lead Calvin Rowlette, and two more singers reformed The Swallows in 1957 and made four singles the next year for King's Federal imprint. The last was a cover of Itchy Twitchy Feeling, then a hit by their old pal Hendricks, by then waging a solo career.