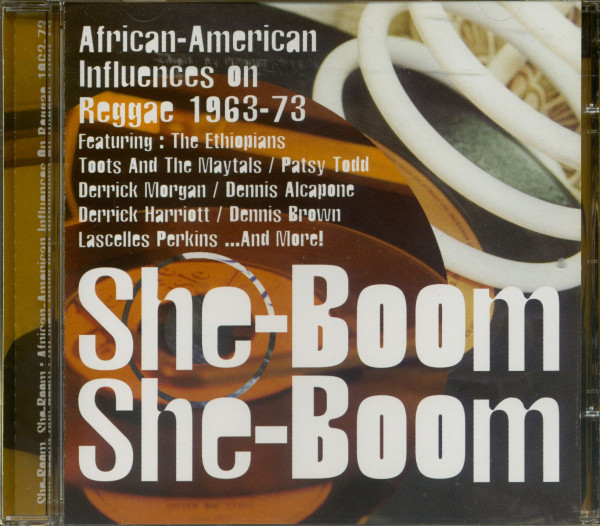 Before Jamaica's national music - and its most outstanding world export - became 'reggae', it inevitably passed through several stages of metamorphosis. First there was the shuffle. the island's own individualistic representation of the sounds that beamed daily and nightly from clear-channel R&B stations in America's deep south - stations that could be heard the length and breadth of Jamaica when good weather conditions prevailed - and over massive sound systems at blues dances island-wide. The whole Ja. music industry that we know today stems from the shuffle, which was initially created to satiate demand for this style after the American R&B scene had moved on and away from it. Eventually the shuffle evolved into Ska, itself still influenced to a degree by the pre-Soul music of Black America. And as US R&B ultimately moved to the backburner to let Soul take over in the mid 60s, so Ska gave way first to soul-influenced rock steady and, eventually, to reggae - but those R&B influences never totally left Jamaican music. as you're about to find out if you've bought this compact disc... To complement its two volumes of reggae versions of soul originals. 'The Music Got Soul' (WESA 847) and 'The Music Got Mo' Soul' (WESA 848), Westside's compilers-that-be now present a dozen and a half tracks which all have their musical origins in the aforementioned pre-Soul era but which successfully adapted to a Jamaican treatment. Presented in a chronology approximate to their original release date (these versions. not the US originals), they show how important American R&B was to the evolution of what we now know as reggae.

Few would dispute this writer's assertion that you couldn't have had one without the other... Several of the acts featured herein actually started their careers in this pre-Soul era. Thus it's entirely appropriate that the oldest song to feature. Joan Whitney and Alex Kramer's 'Ain't Nobody Here But Us Chickens' -originally recorded by, and a # 1 R&B, # 6 Pop hit for, the great Louis Jordan in early 1947 - should be performed by the one of the first Jamaican artists to record locally. Lascelles Perkins made his debut recordings in the mid 1950s for Clement 'Coxsone' Dodd. 20 years before his amusing version of 'Chickens' (complete with speeded-up, Chipmunk like backing vocals by 'The Chicks') hit the racks in mid-1974. An old-fashioned crooner with a distinct Nat 'King' Cole influence. Perkins had been only semi-active as a recording artist for some years prior to this recording - but was still singing in the early 80s. when he cut a version of another Whitney/Kramer song much beloved by Jamaican singers. 'No Man Is An Island'. for his brother-in-law Dodd's Studio One imprint.

Another of those who was 'there at the start' was Derrick Harriott, and it's Derrick who provides us with the earliest recording on this CD. A more than capable tenor with a distinctive, melodic falsetto, Harriott had not long departed his colleagues in the Jiving Juniors to begin a lengthy career as a solo when he cut his own. slow-soul version of Donnie Elbert's 'What Can I Do' (De Luxe. 1958). The song had been a big 'end-of-night' closer for sound systems for years. Derrick interspersed the verses of 'What Can I Do' with a recitation that he had borrowed from 'All I Could Do Was Cry Part Two'. an early. torrid performance by future soul star Joe Tex (Anna Records 1959). To round the whole thing out he also threw in a snippet of Wilson Pickett's then-current. breakthrough hit 'It's Too Late' (Double L. 1963) and the mixture came out perfectly, as you'll hear here. Harriott did not confine his interest in Elbert's catalogue to 'What Can I Do' - he cut the man's uptempo jiver 'Leona' as the flip of 'The Wedding' - nor his interest in medleys to this record. In 1969, just as rock steady was turning into reggae, he blended the choruses of the Pastels' Been So Long' (Hull. 1957) with the verses of the Tams' 1964 ABC-Paramount recording of 'You Lied To Your Daddy' to forge the churning. exciting version featured here. All in all. Harriott recorded more than a dozen Tams tunes, among them 'Standing In', 'Laugh It Off'. 'Close To Mn', 'Do I Worry'. 'Walk The Streets (a.k.a 'You Might As Well Forget Him') and, with his proteges Keith Rowe and Tex Dixon, 'What Kind Of Fool(Do You Think I Am). Something of a fan. obviously...

The aforementioned Studio One was, by common consensus, the nearest thing Jamaica had to an Atlantic Records once the recording industry began to take shape in the Caribbean. Under the auspices of the Ertegun brothers. Ahmet and Neshui and their friend Herb Abramson (later succeeded by Jerry Wexler), Atlantic became the trademark of everything that was and is good about 50s R&B and 60s soul (and. for that matter and if your tastes run to it, 60s and 70s rock!). This was in no small way due to a select team of songwriters, musicians and arrangers whose work monopolised the early Atlantic sessions - and an unparalleled roster of R&B talent such as the Drifters and Ruth Brown. You can bet your life that Atlantic 78s and 45s were the backbone of many and early sound system box - indeed. Atlantic was being pressed locally in Jamaica as early as 1956 - and that Ruth Brown's groovy '5-10-15 Hours' and Clyde McPhatter and the Drifters slightly-sexy, calypso-tinged 'Honey Love' would have been heard the length and breadth of the island in 1952 and 1953 respectively. It's a certainty that both would have been danced to by the young Rainford Hugh a.k.a. Lee a.k.a. Scratch a.k.a. a whole lot of other names that would fill up the rest of this sleevenote Perry in his days as a runner/gofer for Coxsone Hi Fi.

And when he first set up his own label after learning his trade from Coxsone, Prince Buster, Duke Reid and Joe Gibbs. the songs were among the first to bear the Upsetter imprint via the versions you hear here. The wholly-obscure. McPhatter soundalike, Burt Walters' version of 'Honey Love' was among the first records to appear on the Upsetter label - and, undoubtedly, one of the first records to have a proto-dub version on its flip. 'Evol Yenoh' consisting of the entire vocal track running backwards over the same strident rock steady rhythm! Val Bennett's jumping version of 'Miss Rhythm's fabulous tune (retitled 'Baby Baby') is fairly unique in that it offers us a rare, ragged-but-right vocal refrain from the late great sax man, over a thunderous rhythm section that must have blown thousands of speakers over the years...