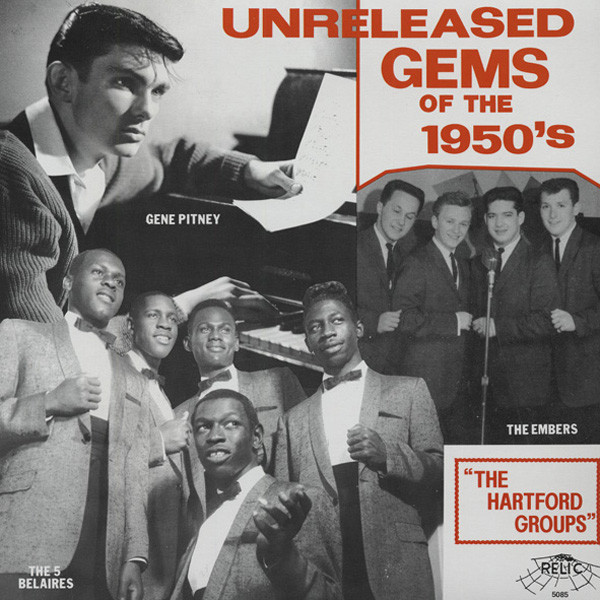 Various: Unreleased Gems From The 1950s 'The Hartford Groups' (LP)

(Relic) 16 tracks (many previously unreleased)
-
Nothing is more rewarding in rock & roll archeology than to uncover previously unknown recordings from the 'golden age' of the late fifties. Usually it's just an alternate take of a well- known song, a scratchy demo, or maybe even an acappella practice session that sets the blood racing. To assemble an entire album with sixteen really memorable. never- released group harmony gems from the late fifties and very early sixties is almost impossible.

Include some of Gene Pitney's first recordings— historical and great — add performances by the 5 Bell Aires. Embers, and Serenaders which were easily good enough to have been released as singles — mix in some fascinating lore from the fringes of rock & roll history, and you've certainly got a winning blend. Our story begins in Hartford. Connecticut in 1957-58. Young entrepreneur John Rys set up a small talent and booking agency with Paul Guimond in the Loew's Poli Theatre building in downtown Hartford. Rys, an ardent r&r fan, worked at the giant Pratt & Whitney aircraft plant in East Hartford and. despite meager financial resource, aspired to discover and develop deserving local talent. Rys may have never made the big time. but he certainly had a fine ear for vocal group harmony. His first group was the 5 Bell Aires. If ever a local group truly deserved a lucky break, it was the 5 Bell Aires. Just one listen to Henry Hall's N.Y. style tenor lead on 'House of Love' (or to their other songs on this LP), and you'll wonder why they didn't join the Five Satins or Nutmegs in the honor roll of classic Connecticut r& b groups.

The Bell Aires did back Larry Lee ( Larry Harper) on-Can I Be in Love'/'Stolen Love' on the local MZ label in the fall of '59 ( Henry Hall had been drafted, so they became the Four Belaires for MZ), but, unfortunately, John Hall's Powerful lead on 'Wedding Bells' or Henry's wistful ballad, My Friends,' never got further than Al Soyka's small studio in Somers where they were recorded under the supervision of John Rys. Henry 'Hawk ' Hall, usual lead singer; his cousin. John, first tenor, Elijah 'Prez' McKinney, baritone; James 'Rock' Jenkins. second tenor; and Lewis Clayton, bass, called their group the Five Marvel Tones when they started to harmonize at the Char ter Oak Terrace housing project in Hartford in 1954. They changed their name to the 5 Bell Aires ( inspired by the plethora of car-named groups) and sang at high school Prat dances and at the Lit Hall on Lawrence Street in the Frog Hollow section of Hartford. The teenagers harmonized in a six by eight bus shell at Charter Oak Terrace, polishing their street corner sounds and developing unique choreography for each song. They were good enough to play with and command the respect of) Bobby Darin at the Foot Guard Hall, and they appeared with the Flamingos. Valentinos, and Tommy Edwards at the old State Theatre downtown.

The 5 Bell Aires sported two complete sets of uniforms. 'one with red tuxedo jackets, the other gold.' They acquired a powerful local mystique as the group to beat — they even won amateur night at the Apollo in Harlem two weeks in a row. Their loyal fans and members of other vocal groups who caught their act wondered why they didn't have a record out. Thesix 5 Bell Aires' songs on this album were first sung as rough demos in 1957, then recorded (in stereo no less) as finished masters probably in 1960 in Soyka's Somers, Ct. studio ( all 'after school,' according to 'Hawk' Hall). Ron Cormier and his Rattletones, a familiar band at almost every local rt r venue. ably backed the guys from Charter Oak Terrace. Rys almost consumated a deal with Hy Weiss at Old Town Records. But nothing finally happened and these six standout doo- wops have languished in the late John Rys' trunk for many forgotten years. Almost made it' surely describes the Embers. another talented group just out of high school from the Frog Hollow section of Hartford. Inspired by the Five Satins. Heartbeats. and early Dion, the quartet usually featured Larry Harper ( Larry Lee) on lead. although all members were qualified to sing in front. Richard Wright was second tenor: Bob Fitzgibbon, first or second tenor. and Andrew-Diamond' Guimond ( brother of John Rys's partner, Paul Guimond) sang bass. They started singing in .58 and, according to Dick Wright, their first real performance was on a Channel 18 telethon. The Embers were prominently featured on an amateur show at the State set up by Rys in early 1959. along with the Flamingos and Bill Haley and the Comets on the regular bill. They rehearsed in the bathroom of Rys' John Paul Agency on Main Street downtown. perfecting 'Melia Wella' and .'Queen for a Lifetime' for CandyRecords in Hartford.

Unfortunately. they were never issued by Candy, nor was the subsequent.' Lover's Night,' recorded in New York City for 20th Century Fox Records. The Embers sang their share of benefits and promotions. including Rys' short- lived 'Shangri-La,' billed as a 'teenage paradise' at 26,2 High Street in Hartford on December 18-19. 1959. They waxed demos at Soyka's studio in Somers and, according to Wright, were ready to back LarryLee on his MZ session but the group broke up two weeks before the date was held in October, 1959. 'Diamond' Guimond left the Embers after the aborted' Lover's Night,' and, at some point, was replaced by Jesse Cavallaro, bass and baritone ( he sang with another Hartford group called the Laurels) and John Pattavina.

After Larry Harper exited the Embers, he led a new group managed also by John Rys called the Serenaders. They borrowed' Prez' McKinney from the 5 Bell Aires as baritone ( Henry Hall had been drafted and the Bell Aires were pretty much dormant after the MZ session); George Cruz, formerly of the Florescents on Bethlehem was second tenor, Richard Reedy, first tenor; and Billy Surmolian, bass. They cut demos in Hartford and in N.Y.C.; Larry Harper vividly recalls making the rounds of Manhattan- based rock 8 roll labels with John Rys. Somehow, their main chance was missed, and the very talented young Larry Harper ( Larry Lee) only made one commercially released single. His vocal agility is evident on'Tremble,' taught him by Gene Pitney, who probably penned the song specifically for the Embers.

We've featured four stirring songs by Gene Pitney backed by the Embers: 'Darkness,' 'Victory,' 'So Tired,' and 'Runaway Lover' (apparently Gene liked songs with short titles back then). Pitney recently recalled; 'You can hear the influence of one of my music heroes, Clyde McPhatter, on these.' Listening to that quivering Pitney tenor on'Victory' some thirty years later, it's surprising that Gene wasn't summoned by an enterprising local group to serve as lead voice.'The black groups of the 50's changed my life,' Pitney recently commented; he once drove from his hometown, Rockville, to Manchester just to hear'Gee' by the Crows on the jukebox. Dick Wright fondly remembers the Embers' backing Gene Pitney on these demos, possibly recorded at Doc Starkes' rough third floor studio in downtown Hartford. The Embers and the 5 Bell Aires did several short bus tours of small movies houses in New England cities, all arranged by John Rys. Ron and the Rattletones always backed the groups, and, according to Wright, Pitney occasionally graced the same bill. 'The Rockville Rocket,' as Pitney was known in Hartford, was just about ready to record for Musicor; he was primarily developing his songwriting talents when he wrote 'Victory' or 'Darkness,' in Gene's own words, 'intended for the guys in the different groups to record.' 'Darkness,' at least, was also recorded down in Marty Kugell's studio in New Haven as a demo with the Nobles.

Pitney crossed the formidable 'Meriden Mountain,' which physically and often in subtle other ways entirely separated the New Haven and Hartford music scene into two different venues. Hartford boasted Brad Davis' version of band-stand; New Havenites followed Jim Gallant, their local Dick Clark. The 5 Bel! Aires would venture by bus to New Bedford or Provincetown instead of proceeding south to New Haven, while the Academics, Chestnuts, or Five Satins would rarely be seen at the State Theatre. In retrospect, international star Gene Pitney not only crossed 'Meriden Mountain,' but he was also the only John Rys protege to really leave Hartford. His brilliant career as an artist and song-writer commenced with'! Wanna Love My Life Away' for Musicor at the end of 1960. After 'Town Without Pity' and Phil Spector -produced 'Every Breath I Take' in '61, it was very clear that Gene Pitney had outgrown his beloved group harmony roots.

The 5 Bell Aires never recovered from 'Hawk' Hall's departure for the service; the Embers and Serenaders disbanded after internal dissension, and the venerable State Theatre finally succumbed to the
wreckers' ball in 1962. We usually resist idealized, halcyon recollections of past moments in time, but there was certainly magic in the air in Hartford, Connecticut when the 5 Bell Aires, Embers, Serenaders,
and Gene Pitney harmonized. (Donn Fileti & Tom Tanski)