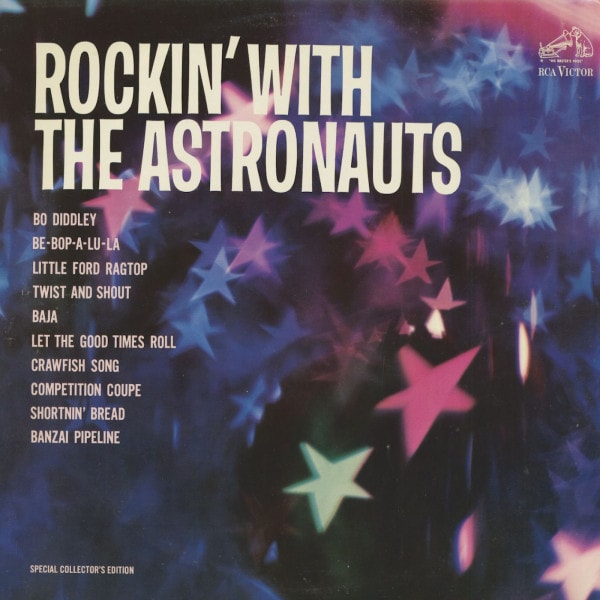 The sensational Astronauts, RCA Victor's five-man space team that orbits at 33 1/2 rpm, have won for themselves an A-OK rating the world over. In this country they have made numerous appearances on network TV—including 'Hullabaloo,' the top-rated teen show—and theirs is the only group of its kind that has played over 100 universities, performing for concerts and dances. The boys have their own TV program, 'Count Down with the Astronauts,' which is seen in four major West Coast markets, and there are plans to syndicate the show nationally.

Ever since the group's formation in Boulder, Colorado, the Astronauts have traveled quickly in one direction UP ! Bob Demmon, the oldest of the Astronauts, is the group's leader. Born in Boulder, Bob can't remember ever wanting any career other than one in music. He started trumpet lessons in the fifth grade, sang in a choir in junior high school, studied piano, and won six straight blue ribbons at Colorado solo contests during high school. When he started school at the University of Colorado, his mother put four hundred dollars in a bank account for him, and that very afternoon he went to Denver and spent it on a new electric guitar. Bob also managed to keep his college average at a B, and was graduated in 1962 from the University with a Bachelor of Music degree. Rich Fifield plays lead guitar for the Astronauts and does half the up-front singing. Born in Nebraska, Rich too always wanted to be a musician— and made his 'unprofessional' debut when he was five, singing for ice cream cones at a local malt shop. He made his professional debut in high school, singing with a local combo, and since 1958 (when he was seventeen) , Rich has supported himself as a musician. He studied at Colorado State University, and joined the Astronauts in August of 1961.

Of all the Astronauts, Jim Gallagher (youngest of the Astronauts, who are all in their twenties) comes from the most musical family. His father played trumpet for bands in Chicago for about ten years and his mother was a vocalist with the Hal Kemp band, among others. But Jim didn't always want to be a musician ; until the third grade, he had his heart set on medicine ! By the time he reached eighth grade, drumming 'in any form' was what he wanted to do— and drumming is what he has done ever since. For the Astronauts, Jim is a one-man percussion section who builds the big beat behind the group's four twanging guitars. Jim studied at the University of Colorado in Boulder, but left school to join the Astronauts.

Dennis Lindsey writes most of the Astronaut's comedy material, plays guitar, and also displays a unique talent for vocal imitations. A Coloradan born and bred, Dennis studied at the Pasadena Playhouse in California and at the University of Colorado. He enjoys dramatics and has composed music. His spare time is devoted to activities ranging from painting and Spanish guitar playing to hunting, fishing and skiing—favorites of most of this action group. 'I had a lot of ambitions when I was a child,' says Stormy Patterson, the Astronaut's bass guitarist. 'First I wanted to own a large ranch, then I wanted to be a movie star.' Storm began his musical career by learning to play the ukulele when he was ten. He bought his first guitar at thirteen, and at fifteen was playing in his first rock-and-roll band. Storm studied at Colorado State College in Greeley, but left school to play with the Astronauts. He shares the up-front honors with Rich Fifield. The Astronauts, all five, are GO all the way, as this collection of rousing favorites proves. 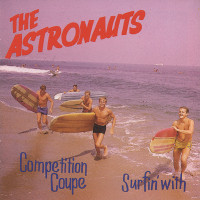 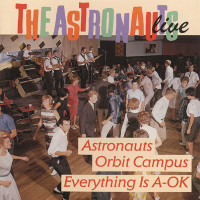 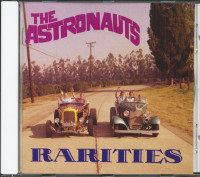