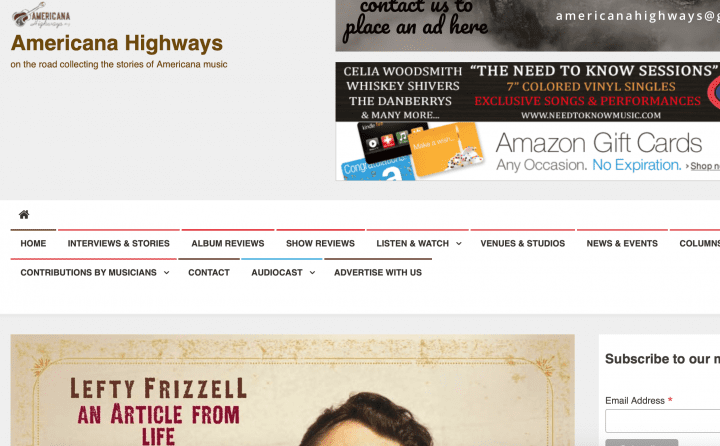 Lefty Frizzell arguably played almost as big a role in the development of modern country music as his friend Hank Williams. Nevertheless, he didn’t make it into the Country Music Hall of Fame until 1982 and, for reasons I’ve never quite figured out, he is not as well known or loved by the public today as, say, Williams or George Jones.

He continues to be revered by his fellow musicians, however. “The soul of Hank Williams, the appeal of Johnny Cash, and the charisma of Elvis Presley. He had it all,” said the late, great Merle Haggard, one of Frizzell’s biggest fans. “The impact he had on country music, and on me, is not even measurable.” Indeed, Frizzell had a huge influence on many artists, including, in addition to Haggard, Randy Travis, John Anderson, and Willie Nelson. (Nelson recorded a whole album called To Lefty from Willie). Roy Orbison paid homage to him by choosing the name Lefty Wilbury for himself when he joined the Traveling Wilburys. George Jones looked up to Frizzell and Williams so much that his producer reportedly admonished him for trying to sound too much like them.

Frizzell, who was himself influenced by Jimmie Rodgers, wrote many excellent songs. But what most set him apart was his unique and emotional vocal style—the way he used his tenor to stretch out syllables, convey intimacy, and blend honky-tonk with an approach that could appeal to a wider audience.

In his day, he certainly got that audience. Both sides of his very first single—“If You’ve Got the Money (I’ve Got the Time) b/w “I Love You a Thousand Ways”—topped country charts in 1950. (The latter song was one of many that he wrote to his wife in late 1947, while serving six months in jail for statutory rape.) And by the end of 1953, he had hit the top 10 no fewer than 15 times, with numbers like “Always Late (With Your Kisses)” and “I Want to Be with You Always.”

Frizzell’s career went into decline by the mid 50s, though he did score hits near the end of the decade (“Cigarettes and Coffee Blues” and his version of “Long Black Veil”); had another No. 1 in 1962 (“Saginaw Michigan”); and continued to enjoy minor hits until shortly before his death at age 47 in 1975. You’ll find all of these songs and a whole lot more—to put it mildly—on the Bear Family label’s new An Article from Life: The Complete Recordings.

I’ve been suspicious of music collections touted as “complete” ever since I shelled out big bucks for the 12-CD The Complete Hank Williams, only to find that I still needed to purchase the two-disc, 49-track Health and Happiness Shows and, later, the three-disc, 54-track The Unreleased Recordings. And I initially thought this Frizzell package from Germany’s Bear Family label might also fall short of its title’s promise, since its dozen music CDs looked similar at first glance to ones in a box that came out in 1999 under the title Life’s Like Poetry. That set was massive, but as some fans noticed, it failed to include dozens of tracks from Frizzell’s archives.

That’s not the case, however, with this anthology, which is packaged as artfully as an Apple computer and appears to contain every last note that Frizzell ever recorded. Its dozen jam-packed music CDs, which offer nearly 15 hours of playing time, feature more than 350 newly remastered tracks, including all of Frizzell’s approximately three dozen hits; every 45, 78, and LP track; and every previously unissued demo, session, and non-session recording, among them many newly discovered tracks.

The release also incorporates a colorful eight-CD, 17-chapter audio biography of Frizzell by his brother, country singer David Frizzell, and an LP-sized, 264-page hardcover book with a wealth of photos, extensive liner notes, a complete discography, and more. I’m tempted to say that this collection contains everything but the kitchen sink, but I’m not finished exploring and it’s possible the sink may be in there somewhere, too.

The package isn’t exactly cheap, but for anyone trying to build a collection of country’s most important recordings, Frizzell’s work is essential. And to paraphrase the title of his first hit, if you’ve got the money, An Article from Life has got the music.