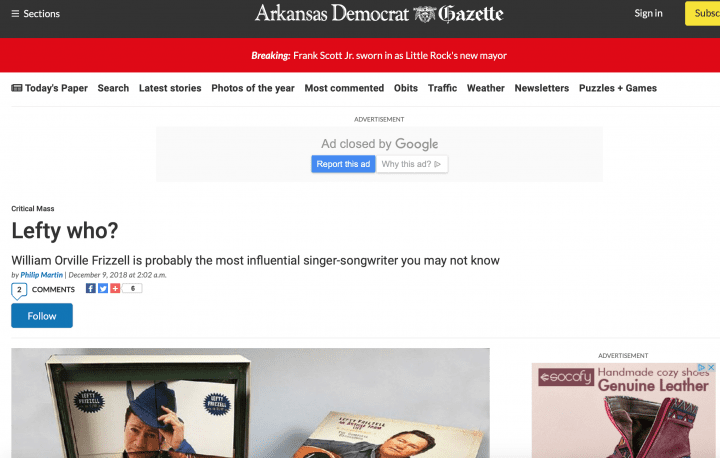 William Orville Frizzell is probably the most influential singer-songwriter you may not knowby Philip Martin | Today at 2:02 a.m
The expansive boxed set of Lefty Frizzell’s music — An Article from Life: The Complete Recordings
To many modern people, country singer "Lefty" Frizzell may seem obscure, and the idea of a 20-CD set presenting not only every track he's known to have recorded but nine CDs of his younger brother David -- also a notable country singer -- reading the audiobook version of his (pretty good) biography I Love You a Thousand Ways: The Lefty Frizzell Story might seem ridiculous.

The list price of An Article from Life: The Complete Recordings (Bear Family) is $299.99. It's beautifully packaged, with an "updated and revised" copy of Life's Like Poetry, Charles Wolfe's 1991 biography of the singer, augmented by hundreds of photographs.

It's a lot of music -- 361 tracks -- for a guy who had a handful and a half of hits and disappeared for long stretches during what now seems be a truncated career. Frizzell died in 1975 at age 47.

But his influence can't be tracked by numbers. He probably had as much to do with shaping the sound of vocal pop music over the past 70 years as anyone, including Elvis Presley and Frank Sinatra. Many singers were deeply influenced by him -- George Jones, widely considered the greatest country singer ever, lost an early gig because the auditioners thought he was a too-blatant imitator of Frizzell. Roy Orbison adopted "Lefty" as his Traveling Wilburys name in his honor.

Willie Nelson and Merle Haggard issued tribute albums to Frizzell; crediting him as a foundational inspiration. Keith Whitley was so affected by Lefty that he recruited another of his siblings -- Allen Frizzell, a gospel artist who bills himself as The Other Brother -- to sing on the chorus of Whitley's 1987 version of Lefty's "I Never Go Around Mirrors."

Yet, outside of "If You've Got the Money, I've Got the Time," "The Long Black Veil" and maybe "Saginaw, Michigan," his records haven't obtained the canonical status as those of his contemporaries Hank Williams and Webb Pierce. As it is, Frizzell pops up here and there in the story of American country music, a kind of singer's singer. More than settling his legacy, the Bear Family set raises a question:

Heck, some of you are probably even asking: Why have I never heard of this Lefty Frizzell before?