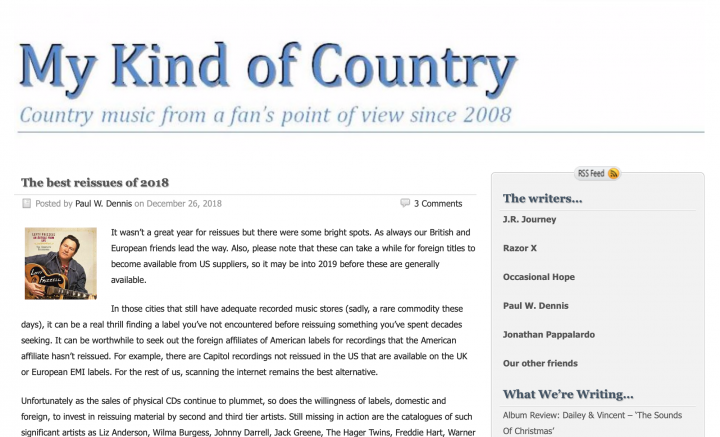 It wasn’t a great year for reissues but there were some bright spots. As always our British and European friends lead the way. Also, please note that these can take a while for foreign titles to become available from US suppliers, so it may be into 2019 before these are generally available.

In those cities that still have adequate recorded music stores (sadly, a rare commodity these days), it can be a real thrill finding a label you’ve not encountered before reissuing something you’ve spent decades seeking. It can be worthwhile to seek out the foreign affiliates of American labels for recordings that the American affiliate hasn’t reissued. For example, there are Capitol recordings not reissued in the US that are available on the UK or European EMI labels. For the rest of us, scanning the internet remains the best alternative.

Unfortunately as the sales of physical CDs continue to plummet, so does the willingness of labels, domestic and foreign, to invest in reissuing material by second and third tier artists. Still missing in action are the catalogues of such significant artists as Liz Anderson, Wilma Burgess, Johnny Darrell, Jack Greene, The Hager Twins, Freddie Hart, Warner Mack, Kenny Price and David Rogers. While there has been a slight uptick in vinyl sales and reissues, most of that has been of only the very top selling artists (and at $22 to $33 per title).
Anyway …

Germany’s Bear Family Records has been the gold standard for reissues; however, this was a rather quiet year on the country side of the business. On the other hand, the one truly significant set released is a doozy. Bear had previously released vinyl and CD boxed sets on the legendary Lefty Frizzell. In October Bear released a greatly expanded twenty CD set titled An Article From Life – The Complete Recordings. The original Bear set was beyond great and if I had unlimited cash reserves I would buy this set which includes the following: