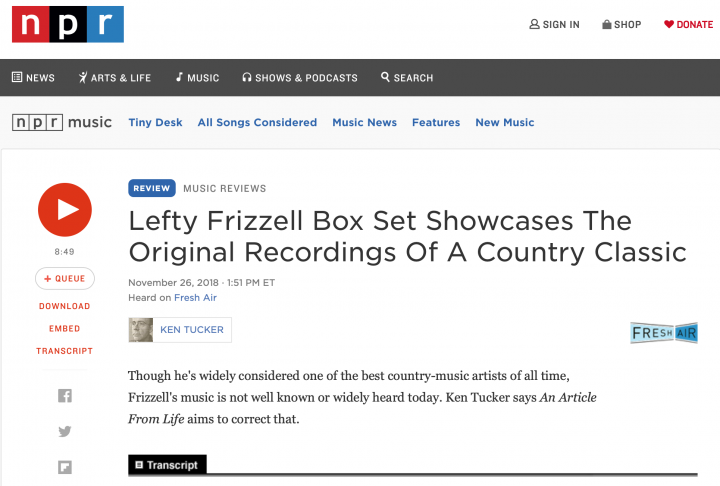 Though he's widely considered one of the best country-music artists of all time, Frizzell's music is not well known or widely heard today. Ken Tucker says An Article From Life aims to correct that.

This is FRESH AIR. Lefty Frizzell is widely considered one of the best country music artists of all time. And performers like Willie Nelson and Merle Haggard have claimed him as an influence, yet his music is little known or heard today. A new release aims to correct that. It's a new 20-CD box set called "Lefty Frizzell: An Article From Life." Rock critic Ken Tucker has a review.

(SOUNDBITE OF SONG, "I WANT TO BE WITH YOU ALWAYS")

LEFTY FRIZZELL: (Singing) I lose my blues only when I'm with you. No one else can do. You're in my heart to stay. But when I'm gone...

KEN TUCKER, BYLINE: Lefty Frizzell is in some ways the greatest singer country music has ever produced. When he came on the scene in the early 1950s, he was an artist fully formed. Still in his early 20s, he sang with the fluidity and expressiveness of an old pro. His phrasing was strikingly original. He had a conversational tone that stretched syllables elastically. Depending on the song, his voice was a confiding croon or a high lonesome wail with a bluesy bottom tone that could make a vulnerable listener weep. As for the songs he was singing, he charged out of the gate with a batch of tunes he'd written himself, each of which would become a country classic.

(SOUNDBITE OF SONG, "ALWAYS LATE (WITH YOUR KISSES)")

TUCKER: That's "Always Late (With Your Kisses)," one of four songs that reached No. 1 on the Billboard country chart in one year, 1951. This remains an unprecedented achievement. At the time, Lefty's only competition for commercial success was Hank Williams, Lefty's pal, who died in 1953. It looked as though Frizzell was set up to become the new king of country music, but it didn't turn out that way. And the reason why is revealed in the new career-spanning box set titled "Lefty Frizzell: An Article From Life."

TUCKER: Frizzell was born William Orville Frizzell in Corsicana, Texas, in 1928. Why Lefty? As a teen, he was a Golden Gloves-level boxer with a mean left hook. He idolized an early country pioneer, Jimmie Rodgers, one of whose nicknames was the Blue Yodeler. Lefty once explained his own distinctive style as a kind of failure to imitate Rodgers' yodeling, noting that, quote, "I got tired of holding high notes for a long time. Instead of straining, I just let it roll down, and it felt good to me." This is typical Lefty, modest to a fault. His blithe lack of introspection makes the deceptively casual beauty in a song such as "A King Without A Queen" seem all the more miraculous.

(SOUNDBITE OF SONG, "A KING WITHOUT A QUEEN")

FRIZZELL: (Singing) Riches do not come in silver and in gold. It comes in the happiness you find. I put my gold and silver before my precious queen. And now there's only memories left behind. If you've ever lost a loved one...

TUCKER: This big box set includes a hardcover biography by Charles Wolfe, Daniel Cooper and Kevin Coffey. What's clear from the tale they tell is that Frizzell had a wide streak of insecurity, always feeling poorly educated and ill-suited to the demands of the music business. And it shows in his recording career. Once he became a star, Frizzell's songwriting output slowed, and he frequently let others pick material for him, Songs that rarely suited his vocal style. He was persuaded to abandon the tight, little backup combos he liked in favor of more elaborately produced sessions with strings and backup singers. The result, quite often, was some very schlocky music.

(SOUNDBITE OF SONG, "WHEN THE ROOSTER LEAVES THE YARD")

FRIZZELL: (Singing) I took a job away from home to make my income grow 'cause my baby wouldn't go with me - I thought I'd take it slow. I waited for her mood to change. I wrote 'til I got tired. Now I'm wondering what goes on when the rooster leaves the yard.

TUCKER: "An Article From Life" is a collection for completists. It includes Frizzell's earliest demo recordings, some radio performances and multiple versions of many songs. When you realize that Lefty rerecorded his hits in various arrangements over the years, there's a lot of repetition here - seven versions of "I Want To Be With You Always," a dozen of "If You've Got The Money, I've Got The Time." One result is that Frizzell's discography contains a number of gems that tend to get buried. Listen to how good this song is, 1957's "Is It Only That You're Lonely." And it was never even released as a single.

(SOUNDBITE OF SONG, "IS IT ONLY THAT YOU'RE LONELY")

TUCKER: By the 1970s, country stars like Willie Nelson, Merle Haggard, Randy Travis and Keith Whitley were hailing Lefty as a profound influence, even as Frizzell's own career at the time was a series of half-hearted performances and valiant stabs at a comeback. In 1975, he suffered a cerebral hemorrhage. And his body, weakened by years of heavy drinking, gave out on him. He was 47. The year he died, he was quoted as saying, "When I sing a song, I want to make it sound like the last thing I ever say in my life." The irony is he sounded like that from the very start.

GROSS: Ken Tucker is critic-at-large for Yahoo TV. He reviewed the Lefty Frizzell box set called "An Article From Life: The Complete Recordings."

Tomorrow on FRESH AIR, as Nancy Pelosi chorales votes, trying to once again become speaker of the House, we talk with journalist Robert Draper about why she became the Republicans' favorite target in the midterms, the challenges she faces from the left and from the right within her own party and how she plans to deal with President Trump. Draper's article in The New York Times Magazine is called "Nancy Pelosi's Last Battle." I hope you can join us.

(SOUNDBITE OF SONG, "THE DARKEST MOMENT (IS JUST BEFORE THE LIGHT OF DAY)")

FRIZZELL: (Singing) You may get downhearted, sad or blue or get foolish notions that I don't love you. Things may go wrong when I'm away...