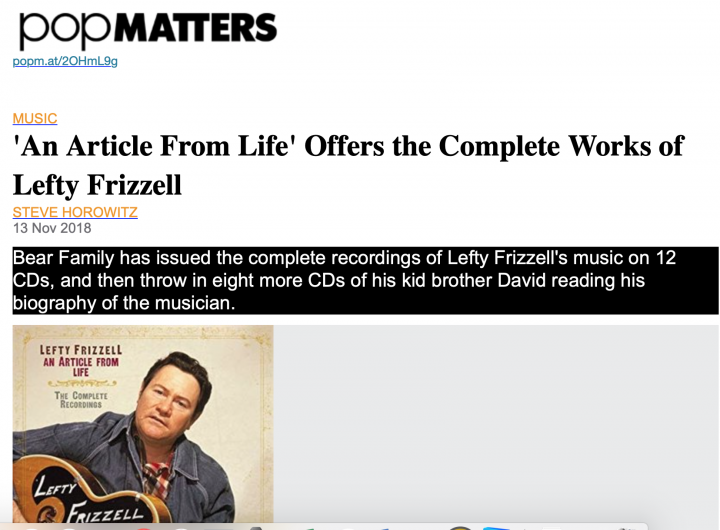 Singer-songwriter Lefty Frizzell was a country music legend who critics credit with creating and popularizing the honky-tonk sound. His debut single, the 1950 number one hit "If You've Got the Money (I've Got the Time) made him a star. The B-side of that record, "I Love You a Thousand Ways" was also a huge success and showcased his softer, romantic side. Frizzell had a slew of chart entries during the early 1950s, but they dried up during early rock's heyday later in the decade. Although he was only in his 20s during most of that time (he was born in 1928), his persona was more adult than those rockabilly cats like Elvis Presley and Johnny Cash. Frizzell had a few more hits during the late 1950s/early 1960s performing original songs he did not write including "The Long, Black Veil" and "Saginaw, Michigan".

His career declined after that. He died at 47 of a massive stroke in 1975. He was said to have had a severe alcohol problem. Frizzell died in relative obscurity. While he was well-known to many of the most successful country artists of the 1970s such as Merle Haggard, Willie Nelson, and George Jones, who credited him as a seminal influence on their music, his demise elicited little fanfare from the country music establishment. He died a sordid death after a short life long after fame had deserted him.

That's the bare bones fact about the man, and that's probably all most people care to know, and any of the recent anthologies of Frizzell's greatest hits would suffice for most listeners. But of course, the truth is always more complex. The devil (or G-d, depending on one's point of view) lies in the details. The German-based independent record label Bear Family has taken on the task of presenting Frizzell's complete musical legacy.

Back in 1984, Bear Family released a 14-album box set called His Life, His Music that comprised all his known recordings. It reissued the material on a 12-CD set now called Life's Like Poetry that included newly-discovered material and a redesigned booklet with previously unpublished photos. Now, 25 years later Bear Family is back at it again, releasing a 20-CD set with an even more recordings!

No one with Life's Like Poetry needs to replace it simply for the few extra tracks here. Alas, despite a few new additions, not that much new music included. The first nine CDs feature a chronological offering of his recordings from 1950-1974. CDs 13-20 are not of Lefty's music but an audiobook version of his kid brother David Frizzell reading his biography of Lefty.

The new package, An Article From Life: The Complete Recordings features some improvements over Life's Like Poetry. This is the definitive set of Frizzell's work; every 45, 78 and LP track, including those that were never issued, demos and non-session recordings—and they have been newly remastered. The package contains a weighty 264-page hardcover book with even more pictures. And then there is that bio written and read by Lefty's brother. Altogether, listening to every track would take 867:41 minutes (or more than 14 hours). This is clearly for the Frizzell completest. This is clearly a labor of love.

The sonic quality of the studio material is wonderful: clear and crisp. No doubt they sound better now that when they exploded out of the jukeboxes. Frizzell had 15 Billboard Top Ten country hits between 1950-54. Now one can hear the musical details—whether it's a slightly out of tune and out of whack piano purposely performed that way on the bar room ode "When Payday Comes Around" to mimic the irreverent fun or Frizzell's aching vibrato on sad ballads such as "I Want to Be With You Always". Frizzell wrote, sang and played simple melodies with plain language lyrics that give these recordings a do-it-yourself vibe, something more authentic than the slick ideal of the era. This matches the sly innocence of songs that beg for more kisses and the promote the joys of married life. And even the cheatin' songs such as "I Love You (Though Your No Good)", focus on the pure love of the narrator rather than the deeds of the wanton partner.

The hits dried up by mid-1950s. Frizzell tried out lots of styles during this period: honky tonk thumpers like "I Just Can't Live That Fast", slow waltzes such as "The Waltz of the Angels", Dixieland rags like "Sick, Sober, and Sorry", Blues such as "Mailman, Bring Me No More Blues", and torch songs like "The Torch Within My Heart". Frizzell had always performed in a variety of styles and in the past had found an audience for all of them. However, times had changed. Bill Haley and the Comets put rock and roll on the map in 1955 and were soon followed by Chuck Berry, Elvis Presley, Little Richard, and other new acts. But Frizzell didn't rock. He was a country purist.

From today's perspective, Frizzell's songs from this era have a timeless sound. His music really was not that different than what he had successfully recorded previously, but times had changed. Audiences found him old-fashioned.

In 1959, Frizzell hit the charts again with the now classic tale of woe, "The Long Black Veil". He sings as a man executed after being falsely accused of murder. He has no alibi because he refused to divulge that he was having an affair with his best friend's wife during the time of the homicide. He sings it in a somewhat hushed tone with just an acoustic guitar strummin', some drums being brushed, and a steel guitar quietly wailing. The song's been covered dozens of times by a slew of artists since, most notably Johnny Cash, Sammi Smith, Joan Baez, the Band, Dave Matthews Band, Nick Cave, Jerry Garcia, and the Chieftains with Mick Jagger singing lead. But Frizzell did it first and set the template from which the rest have borrowed.

Frizzell had a few songs that hit the bottom of the charts in the early 1960s, and then had the biggest hit of his career in 1963 with the number one ditty "Saginaw, Michigan", which spent a total of 23 weeks on the Billboard Country chart. Frizzell sings from the perspective of a man who has tricked his greedy father-in-law into thinking he was a rich man. The song is full of clever verbal wordplay (it's amazing how many rhymes one can sing to the words "Saginaw" and "Michigan"!) and they flowingly trip over Frizzell's tongue.

During the rest of the sixties, Frizzell's offerings found less and less of an audience although he did record some stellar material including the forthrightly sober "Make That One for the Road a Cup of Coffee", the breezy "She's Gone, Gone, Gone", the bachelor's declaration "The Marriage Bit" and the homicidal ode, "An Article from Life". Again, these songs aren't very different than what he initially recorded and appealed to the older generation during the blossoming of the youth movement.

The same is true for his 1970s recordings. Some songs did make the Billboard Country single's top 100, including the sugary "Watermelon Time in Georgia", the sentimental "You, Babe", the self-pitying "I Never Go Around Mirrors" and the celebratory "Lucky Arms". The songs have their merit, but Frizzell didn't sound any different at the end of his career than he did at the beginning. Thus, ends the first nine CDs.

CDs ten and eleven contain 71 demos and private recordings from the 1940s/1950s/1960s. There are many lovely, unpolished songs that feature just Frizzell and his guitar, including multiple versions of love songs such as "Don't Stay Away (Till Love Grows Cold)", Why Didn't You Tell Me That Our Love Was Wrong", and "I Won't Be Good For Nothing". The final music CD features transcriptions from the radio programs made for the various armed forces. The have artifactual interest but suffer from the inferior technology in which they were initially made.

As for the eight discs of David Frizzell telling the story of his big brother, I Love You a Thousand Ways: The Lefty Frizzell Story--well, that seems like an indulgence to me. De gustibus non est disputandum. One can just as easily read the book oneself with Lefty's music playing in the background.

Bear Family deserves kudos for keeping Lefty's legend alive by releasing such a complete package of his material. While such a box may not be necessary for a casual listener, the obsessive fan can find great joy in such a comprehensive and informative anthology.