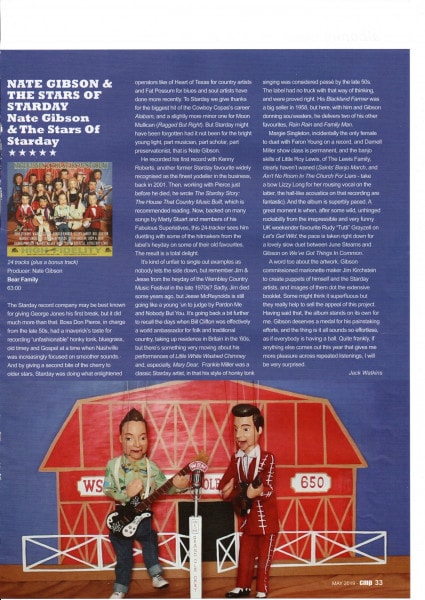 24 tracks (plus a bonus track) Producer: Nate Gibson Bear Family 63:00
The Starday record company may be best known for giving George Jones his first break, but it did much more than that. Boss Don Pierce, in charge from the late 50s, had a maverick's taste for recording "unfashionable" honky tonk, bluegrass, old timey and Gospel at a time when Nashville was increasingly focused on smoother sounds. And by giving a second bite of the cherry to older stars, Starday was doing what enlightened operators like of Heart of Texas for country artists and Fat Possum for blues and soul artists have done more recently. To Starday we give thanks for the biggest hit of the Cowboy Copas's career Alabam, and a slightly more minor one for Moon Mullican (Ragged But Right). But Starday might have been forgotten had it not been for the bright young light, part musician, part scholar, part preservationist, that is Nate Gibson. He recorded his first record with Kenny Roberts, another former Starday favourite widely recognised as the finest yodeller in the business, back in 2001. Then, working with Pierce just before he died, he wrote The Starday Story: The House That Country Music Built, which is recommended reading.

Now, backed on many songs by Marty Stuart and members of his Fabulous Superlatives, this 24-tracker sees him duetting with some of the hitmakers from the label's heyday on some of their old favourites. The result is a total delight. It's kind of unfair to single out examples as nobody lets the side down, but remember Jim & Jesse from the heyday of the Wembley Country Music Festival in the late 1970s? Sadly, Jim died some years ago, but Jesse McReynolds is still going like a young 'un to judge by Pardon Me and Nobody But You. It's going back a bit further to recall the days when Bill Clifton was effectively a world ambassador for folk and traditional country, taking up residence in Britain in the '60s, but there's something very moving about his performances of Little White Washed Chimney and, especially, Mary Dear. Frankie Miller was a classic Starday artist, in that his style of honky tonk
singing was considered passé by the late 50s. The label had no truck with that way of thinking, and were proved right.

His Blackland Farmer was a big seller in 1958, but here, with him and Gibson donning sou'westers, he delivers two of his other favourites, Rain Rain and Family Man. Margie Singleton, incidentally the only female to duet with Faron Young on a record, and Darnell Miller show class is permanent, and the banjo skills of Little Roy Lewis, of The Lewis Family, clearly haven't waned (Saints' Banjo March, and Ain't No Room In The Church For Liars - take a bow Lizzy Long for her rousing vocal on the latter, the hall-like acoustics on that recording are fantastic). And the album is superbly paced. A great moment is when, after some wild, unhinged rockabilly from the irrepressible and very funny UK weekender favourite Rudy "Tutti" Grayzell on Let's Get Wild, the pace is taken right down for a lovely slow duet between June Stearns and Gibson on We've Got Things In Common. A word too about the artwork. Gibson commissioned marionette maker Jim Kirchstein to create puppets of himself and the Starday artists, and images of them dot the extensive booklet. Some might think it superfluous but they really help to sell the appeal of this project. Having said that, the album stands on its own for me. Gibson deserves a medal for his painstaking efforts, and the thing is it all sounds so effortless, as if everybody is having a ball. Quite frankly, if anything else comes out this year that gives me more pleasure across repeated listenings, I will be very surprised.