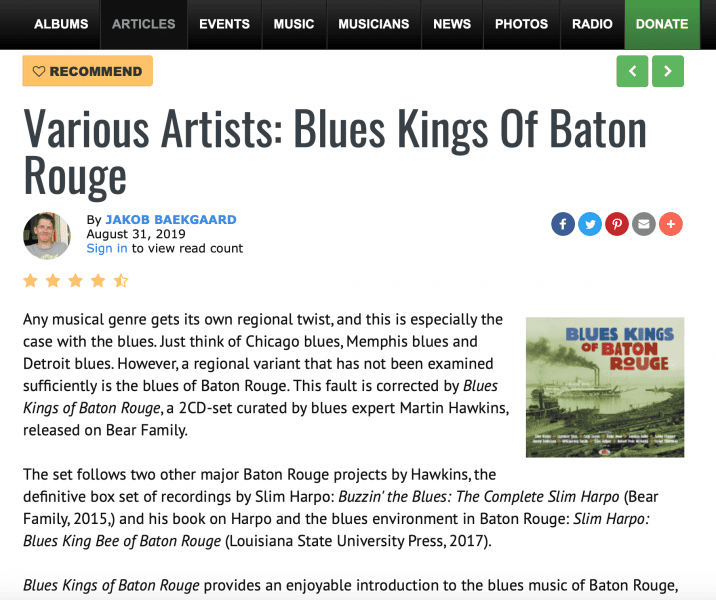 Jakob Baekgaard By JAKOB BAEKGAARD
August 31, 2019
Sign in to view read count
Various Artists: Blues Kings of Baton Rouge Any musical genre gets its own regional twist, and this is especially the case with the blues. Just think of Chicago blues, Memphis blues and Detroit blues. However, a regional variant that has not been examined sufficiently is the blues of Baton Rouge. This fault is corrected by Blues Kings of Baton Rouge, a 2CD-set curated by blues expert Martin Hawkins, released on Bear Family.

Blues Kings of Baton Rouge provides an enjoyable introduction to the blues music of Baton Rouge, focusing on the period between 1954 and 1974. As Hawkins explains in the album's 52-page booklet, the reason for this is quite simple; before 1954, little recorded evidence of the blues scene in Baton Rouge existed, and after 1974, the blues started to disappear, making room for other genres like soul and R&B.

In the years covered by the set, a vibrant, local scene is captured with Slim Harpo as the leading light. Among the 53 tracks, nine are by Harpo, including his big hit "I'm a King Bee." The sound is gritty and down to earth, relying on few instruments like piano, harmonica, guitar and drums. J.D. Miller, who recorded much of the music heard on the set, knew how to recognize an authentic sound and a good blues song and he paved the way for artists like Harpo and Lightnin' Slim. Along the way, he also made up monikers for many of his artists, including the irresistible Lazy Lester and Lonesome Sundown.

Aside from the commercially-driven blues music recorded by Miller, there were also deep, original folk sounds like those of Robert Pete Williams, but separated spheres also intertwined. The most beautiful example is Williams' homage to Harpo, "Goodbye Slim Harpo," one original blues man saluting another.