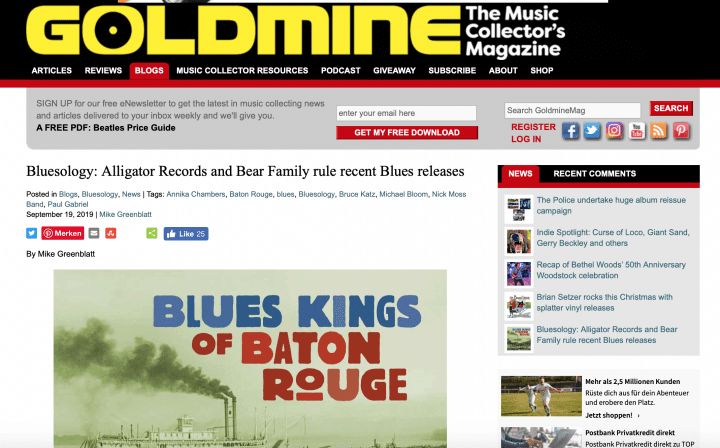 From 1954 to 1971, the city of Baton Rouge gave the world Slim Harpo, Lightning Slim, Lazy Lester, Schoolboy Cleve, Lonesome Sundown, Tabby Thomas, Whispering Smith and Guitar Kelley. These artists and more now have the Bear Family Records treatment of exquisite remastering and copious illumination with a 52-page booklet of rare photos and fascinating information within the phenomenal bonanza that is Blues Kings Of Baton Rouge, 58 tracks on two discs of the real thing. In the running for the best blues compilation of the year, this limited edition (only 1,000 copies were pressed) slides by with a paucity of clinkers. Back in the day, Excello Records in Tennessee had a deal in place with JD Miller, a white entrepreneur/engineer from Louisiana who knew a good thing when he heard it…and we are all the beneficiaries.

Lucky Guy! (Alligator Records), by the Nick Moss Band featuring Dennis Gruenling, is the follow-up to last year’s The High Cost Of Low Living and it expands upon that album’s ferocious program of guitar virtuosity (Moss) and late-night bar-room blues-harp (Gruenling). With tasty production by Kid Andersen (lead guitarist of Rick Estrin & The Nightcats, another blistering blues band), 13 of 14 are original (the sole cover is Johnny O’Neal’s 1976 “Ugly Woman”). The band is funkier than a mosquito’s tweeter (to quote Tina Turner) and with a great wash of Hammond B-3 and Wurlitzer, electric and acoustic bass plus stop-on-a-dime drumming, you’d be hard-pressed to pass this action up.

The VizzTone Label Group promotes itself as purveyors of “World Class Blues” and I’ll be damned if I’m going to disagree. So when singer/songwriter/red hot mama Annika Chambers tells you to Kiss My Sass, you best straighten up and listen hard. She’s the reigning Blues Music Award winner for “Soul Blues Female Artist of the Year” and she proves it all night on this 10-track manifesto on exactly how to serve her needs. You know “You Can’t Win” with her so you might as well bow down to her greatness. Despite being from a “Two Bit Texas Town,” she’ll put you in a “World Of Hurt” or make you stay “In The Basement” should you cross her. This third and best effort has her voice out front and her subservient band kicking like an ornery mule.
The Mighty Orq, a colorful Houston personality in his own right, is on hand to provide some guitar sting (check out his action on opener “Let That Sass Out”). She covers Sir Mack Rice’s “What’s Your Thing,” even adding pedal steel to give new meaning to the term “country blues.” Add some smokin’ sax and the sound gets right in-your-face. She closes with a beautiful cover of Chris Smithers’ “I Feel The Same” that at least equals—if not tops—the popular Bonnie Raitt version.

In 1985 country singer George Jones asked that musical question, “Who’s Gonna Fill Their Shoes.” He was singing about long-lost honky-tonk vocalists but the same question can be asked now that the beloved Mac Rebennack—known as Dr. John—has died. Who’s going to fill Dr. John’s shoes? May I recommend pianist/composer/producer Bruce Katz? If the first three tracks of his transcendently wonderful Solo Ride (American Showplace Music) are any indication, that recommendation isn’t too far off the mark. One listen to his update on solo piano of Tampa Red’s 1940 “It Hurts Me Too” is to marvel at not only his dexterity, but his feeling, soul, syncopation and realignment of the New Orleans aesthetic. True, Tampa Red was a guitarist who left his mark on the town of Chicago for whomever came in his wake, but the spirit of New Orleans seems to shine on everything Katz plays.
Katz has been performing, composing and recording for 30 years. In other words, his credentials are in order. Whether he’s imbibing in the boogie, barrelhousing all night long at some roadside dive, or adding a hint of the devil in updating a gospel standard, he takes from the ‘30s, ‘40s and ‘50s, and adds his personalized spin. He has a quirky side to him too that adds humor and insight when, for instance, he spins out a country-waltz. You can tell he’s listened to Professor Longhair. He claims “Praise House” was inspired by the Blind Boys Of Alabama, though the title comes from yet another chapter of shameful American history (a praise-house was a hidden shack in the woods where enslaved blacks could freely worship). “Red Sneakers” could’ve been written by Jelly Roll Morton. It almost sounds like a Scott Joplin rag. The Brooklyn-born Katz has a Masters Degree in Jazz Performance. He spent 14 years as a Berklee College of Music professor, six years in Gregg Allman’s band and a decade in John Hammond, Jr.’s band. Yeah, I miss Mac terribly but Bruce Katz is a shining light for sure.

The self-released self-produced Whisper In The Wind by Michael Bloom and the Blues Prophecy contains eight searing originals by the Chicago singer/songwriter/guitarist/band leader and three perfectly chosen covers that amplify this Prophecy’s attributes—its five-guitar, five-voice, three-keyboard two-drummer attack—in an all-out blitz of blues-drenched rock’n’roll fury. “Brownsville” (1969) by Furry Lewis [1893-1981], “Old Man Blues” (1988) by Johnny Copeland [1937-1997] and, best of all, the closing “Dust My Broom” [1936] by Robert Johnson [1911-1938].

Five decades in and the wildly eclectic Connecticut guitarist Paul Gabriel is cranking out the best albums of his career. He’s a Man Of Many Blues (Smoke Ring Records) on his second straight project with producer/guitarist Duke Robillard who brought along two members of his own band besides chipping in with some stinging electric and rhythmic acoustic. Harmonicat Sugar Ray Norcia and vocalist Christine Ohlman also shine in supporting roles. But it’s Gabriel’s vocals and guitar on his 13 new originals that take center-stage. He’s developed into an effective singer (in the David Bromberg mold) and his new sound is one of smooth uptown soul, complete with horns and Ohlman’s purring harmony. Gabriel takes from the Michael Bloomfield aesthetic. He sings and swings with chunky fervor on the uptempos and makes his guitar weep and moan on the slow bluesers.