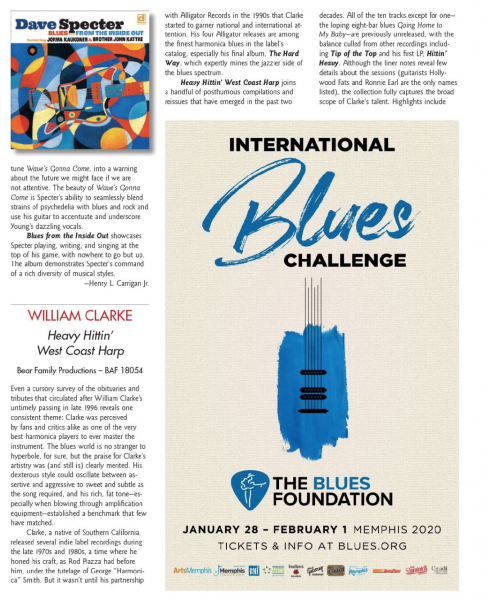 WILLIAM CLARKE Heavy Hittin' West Coast Harp Bear Family Productions — BAF 18054
Even a cursory survey of the obituaries and tributes that circulated after William Clarke's untimely passing in late 1996 reveals one consistent theme: Clarke was perceived by fans and critics alike as one of the very best harmonica players to ever master the instrument. The blues world is no stranger to hyperbole, for sure, but the praise for Clarke's artistry was (and still is) clearly merited. His dexterous style could oscillate between as-sertive and aggressive to sweet and subtle as the song required, and his rich, fat tone—es-pecially when blowing through amplification equipment—established a benchmark that few have matched. Clarke, a native of Southern California, released several indie label recordings during the late 1970s and 1980s, a time where he honed his craft, as Rod Piazza had before him, under the tutelage of George "Harmoni-ca" Smith. But it wasn't until his partnership with Alligator Records in the 1990s that Clarke started to garner national and international at-tention.

His four Alligator releases are among the finest harmonica blues in the label's catalog, especially his final album. The Hard Way, which expertly mines the jazzier side of the blues spectrum. Heavy Hittin' West Coast Harp joins a handful of posthumous compilations and reissues that have emerged in the past two decades. All of the ten tracks except for one—the loping eight-bar blues Going Home to My Baby-are previously unreleased, with the balance culled from other recordings includ-ing Tip of the Top and his first LP, Hittin' Heavy. Although the liner notes reveal few details about the sessions (guitarists Holly-wood Fats and Ronnie Earl are the only names listed), the collection fully captures the broad scope of Clarke's talent.

Highlights include the chromatic harmonica showcase Tribute to George Smith and Chromatic Jump. the swing-ing jump blues Let's Celebrate Life, and the slow blues Home Is Where the Heart Is. The album is available via digital down-load as well as a limited-pressing LP release that LB received for this review. Geared toward the audiophile market and smartly packaged with a 180-gram platter. its gatefold sleeve is dotted with black and white photos from Clarke's early years and liner notes penned by blues harp authority Bob Corritore (who also produced the reissue). This album's deep cuts are certain to please fans of harmonica blues, and especially those familiar with his Alligator work who are hungry for fresh material. —Roget Gatchet