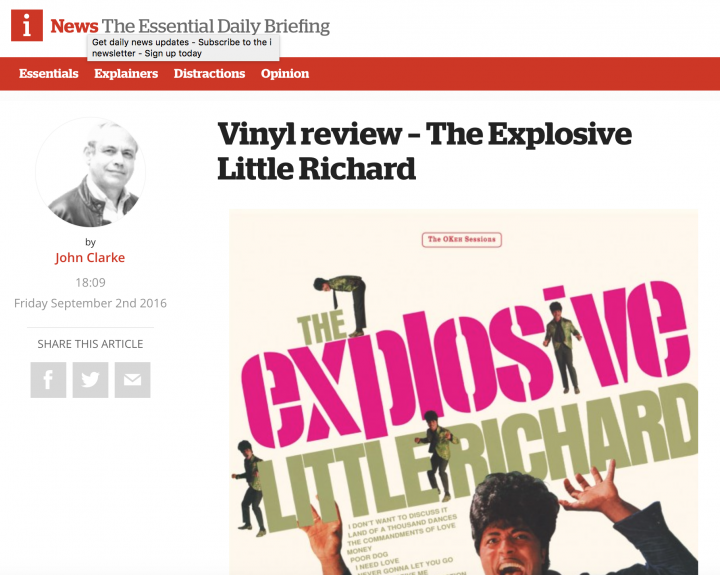 The Explosive Little Richard The Okeh Sessions Bear Family By the mid-1960s Little Richard was, as Bill Dahl points out in his excellent sleevenotes to this vinyl reissue, facing a musical dilemma A R&B star turned rock’n’roller he’d enjoyed huge success in the late Fifties with a string of rock’n’roll classics for the Specialty label including “Long Tall Sally”, “Tutti Frutti”, “The Girl Can’t Help It” and “Rip It Up”. He’d also found God, renounced secular music and then been persuaded back to rock’n’roll when he saw how much money he could make. He’d cut  inferior retreads of his earlier hits for different labels, but now, signed to Columbia offshoot Okeh and with his old labelmate Larry Williams of “Bony Maronie” fame at the helm he was ready to launch himself into the then burgeoning soul market.

He was still blessed with an immaculate voice and threw himself wholeheartedly some great contemporary sounding tracks including the Northern Soul favourite “I Don’t Want To Discuss It”,  the big-voiced “A Little Bit of Something (Beats a Whole Lot of Nothing)” and just to prove that parentheses were hip, “Poor Dog (Who Can’t Wag His Own Tail)”. This release also includes tracks he cut during a UK tour which saw him at Abbey Road, where, backed by top session men including homegrown guitar hero Big Jim Sullivan, he cut a stomping and superior version of a Bobby Marchan song “Get Down With It”, later appropriated by Slade. Sadly, the promise he showed here was frittered away as he switched labels and didn’t extend what could have been his transformation into a great soul singer. Still, this handsome reissue with a vinyl LP accompanied by a bonus 12in 45RPM  album containing original non-album tracks and outtakes, shows us what could have been