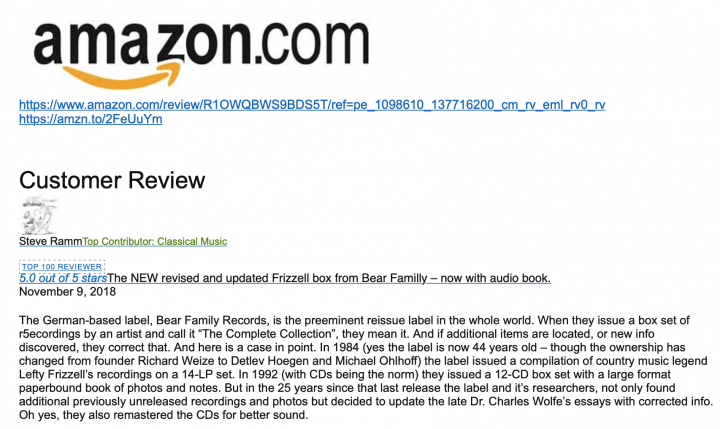 The German-based label, Bear Family Records, is the preeminent reissue label in the whole world. When they issue a box set of r5ecordings by an artist and call it “The Complete Collection”, they mean it. And if additional items are located, or new info discovered, they correct that. And here is a case in point. In 1984 (yes the label is now 44 years old – though the ownership has changed from founder Richard Weize to Detlev Hoegen and Michael Ohlhoff) the label issued a compilation of country music legend Lefty Frizzell’s recordings on a 14-LP set. In 1992 (with CDs being the norm) they issued a 12-CD box set with a large format paperbound book of photos and notes. But in the 25 years since that last release the label and it’s researchers, not only found additional previously unreleased recordings and photos but decided to update the late Dr. Charles Wolfe’s essays with corrected info. Oh yes, they also remastered the CDs for better sound.

I’ll be frank up front and say that I do not own the previous CD set so I can’t really compare the sound here with that one (now long out of print and selling on the secondary market). And There are still 12 CDs of music here (I’ll explain the additional eight shortly) so I can’t say which tracks are newly added. And, whiles I’ve read the text in the book (more on that too) I don’t have the earlier one to compare it with. But I’ll do the best I can to guide you through this current box (being released just in time for the holiday season.) I was provided with a copy in advance of the release date in exchange for an objective review.

Next, because of the depth and price of this set (echoing Frizzell’s biggest tit, “If You’ve Got The Money Honey, (I’ve Got the Time)”) , I’ll assume those who are reading this review will know who Lefty Frizzell (born William Orville Frizzell ) was. His recording career was primarily in the 1950s but he was recording into the 1970s; he died in 1975.) So, I won’t go into any bios here (they are in the book).

Let me describe the packaging first. This is one HEAVY set! The whole set weighs in at 11 ½ pounds!! The book this time – 264 glossy 12x12in. pages – weighs FIVE POUNDS by itself! (This is not a book you will read while it’s on your lap.) There are six digipaks (each with a partial illustration of Lefty which form a puzzle) with two CDs in each and a track list on the back. Nine of the CDs contain the complete output of Frizzell for Columbia and ABC Paramount Records presented in chronological order through 1975.The next two CDs contain “Demo & Private Recordings” made in the 1950s/1960s and these are often as brief as one-minute (These are various “takes” of songs so you may hear them repeated two or three times. This is the area where sound quality varies a lot. As is noted by the Producers, these are one-of-a-kind and the sound engineer – the audio magician Christian Zwarg – did the best he could with the material. Disc 12 is filled with six “radio transcriptions” from 1951 and the early 1960s for five minute shows for the Army, Navy and Air Force. Each contains two complete performances with the opening and closing theme – his biggest hit “If You’ve Got the Money”. . The last one features the hit “Mona Lisa” performed by Lefty’s younger brother David.
Now on to the additional 12 CDs that make up this 20-disc set. In 2011 younger brother David wrote a bio of Lefty titled “I Love You A Thousand Ways”. In 2011 David recorded the audiobook version of the hardback book on eight CDs. The BFR box includes those eight CDs, each packed in a cardboard sleeve which reproduces the front and back of one of Lefty’s hit Lps. Of course by shrinking the size from 12 inches square to 5 inches square, the liner notes on the back will require a magnifying glass.

So, now on to the (five-pound!) book. It contains – literally – THOUSANDS of photos (many in color) from both promo photos (you’ll see 4 or five from the same “shoot” as well as photos from the Family photo album. Speaking of photo albums, pages 45-56 reproduce the full “Lefty Frizzell Souvenir Album”. Then there is the biographical essay, originally written by Wolfe and now updated by co-producers Daniel Cooper and Kevin Coffey. The rear contains a 25 page LP discography, A listing of songs on all the single releases and Eps. And details on the Demos and Transcriptions. Then comes the “Song Index”, where you’ll see where to find a particular song. One thing you notice is that some songs appear many times. Of course the one with the most is “If You’ve Got The Money” (12 times), but “I Love You a Thousand Times” is here seven times, “I Want to be With You Always” seven times, and “Mom and Dad’s Waltz” five times.

I’ve listened to about 75% of the music CDs so far – the Cds run from about 60 to 77 minutes each – and have not yet found the time for the audio book discs. But I think I’ve done enough to give you Frizzell fans out there – of which there are many! - enough info to guide you

I hope you found this review both informative and helpful.