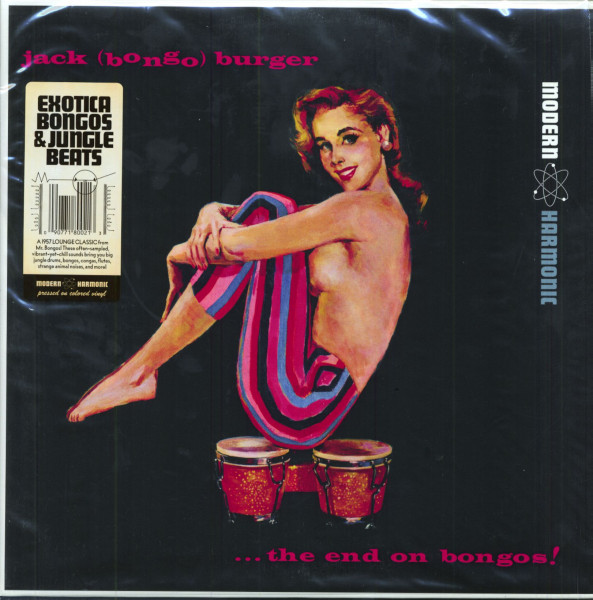 A 1957 lounge classic from “Mr. Bongos!” These often-sampled, vibrant-yet-chill sounds bring you big jungle drums, bongos, congas, flutes, strange animal noises, and more! Accomplished bongo player Jack Burger wasn’t known as “Mr. Bongo” without reason. Before the Beatnik generation picked up on the bongos as their super-swank instrument of choice, Jack Burger was already slinging his smooth bongo skills all over the West Coast, from Gene Autry’s radio show to session dates with the Beach Boys, Nelson Riddle and dozens of television programs. He's probably the percussion player you hear in every television commercial from the 60s -- and he played more than bongos, too, being an accomplished tympanist and kit player. Bongo was percussion. Besides being an accomplished player, Jack was also a primo bongo instructor -- he taught for years in the Los Angeles public school system and wrote a number of instructional books on how to play the bongos.

And that's how this little gem came to be -- Hi-Fi records signed Mr. Bongo for a series of instructional albums, and along with those he put together a killer bongo combo and dropped this hi-fidelity gem. Long sought after and much-sampled, the album is a flurry of wild percussion and latin beats, with Jack's bongos at the heart of everything. Want to hear percussion talk? Listen to “Conversar En La Noche,” a wild percussion chit-chat that doesn't need any other instruments. This platter has lovingly-restored packaging (that cover painting!) and is pressed on wild colored vinyl — the Modern Harmonic way. This album is the living end!