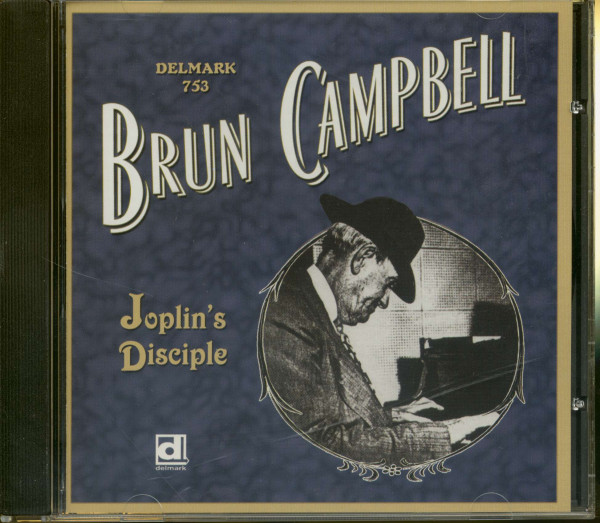 Brun Campbell was born in Washington, KS in 1884 and was an accomplished pianist by the age of 14. While visiting Oklahoma City he was approached to try out a manuscript. The song was "Maple Leaf Rag" and because of this chance meeting Brun left home for Sedalia, MO to meet the composer Scott Joplin. He also met ragtime composers Louis Chauvin, Scott Hayden, James Scott, the Turpin brothers and studied with them as well as Joplin. Recorded in 1947 Joplin's Disciple contains over thirty ragtime performances, interviews most of which are previously unissued, 68 minutes.

Erfahre mehr über Brun Campbell
When I was a young and naive jazz fan on my first trip to California, I KNEW that ragtime was... mehr
Menü schließen
"Brun Campbell"

When I was a young and naive jazz fan on my first trip to California, I KNEW that ragtime was something that Alexander's Band played. Within a few short weeks I met an old and wrinkled barber named Brun Campbell in a shop at 71 I Venice Blvd., next to the Venice city hall, who changed my outlook so graphi-cally that were Ito live to twice the age of that venerable man I'll never forget the lesson he taught me. I'd walk into his shop and ask him to tell we about the ragtime years and he'd lock the door, put the "Closed" sign on the door and regale me with tales of his days with Scott Joplin, Tom and Charles Turpin's tent show on the site of St. Louis' Union Station, and of hearing Ma Rainey, Bessie Smith, Chippie Hill, Ethel Waters, Mamie Smith and so many oth-ers.

Most of all he acquainted me, from a few wonderful home-recorded acetates, aged and cloudy tintypes and photos dug out of a cardboard box, with the music of an era that Alexander's band had no part of other than its exploitation and burial. But Brun Campbell wasn't buried in the avalanche of tripe that poured from Tin Pan Alley. He lived on to teach just a few of a younger generation the beauty and intricacy of a beautiful and lasting art form. S. Brunson Campbell was born in Washing-ton, Kansas in 1884, took music lessons in his youth and by the time he was 14 was an accomplished pianist. He left home for a cel-ebration in Oklahoma City but was separated from his companion and was trying out some music at the Armstrong-Byrd Music Co. A crowd gathered to listen to him when a young mulatto named Otis Saunders came forward with a pen-and-ink manuscript and asked Brun to try it out. It was "Maple Leaf Rag" and Saunders told Brun the composer, Scott Joplin, lived in Sedalia, Missouri.

After returning home, Brun was so haunted by the new musical experience that he went to Sedalia and struck up a friendship not only with Saunders and Joplin but also with Louis Chauvin, Scott Hayden, Arthur Marshall, James Scott and the Turpins with whom he studied for a time. When he left, Joplin handed him an 1897 silver dollar and said to "keep it with you always. The date was the year Joplin wrote his first rag "Original Rag". A few years later, Brun and a friend were out hunting and got into an argument as to who was the best shot. The coin served as a target which the friend missed but Brun put a hole in the center and carried it until he spent it by accident. In 1932 it turned up again when a man spent it in his barber shop in Venice, 2,000 miles from where Brun had spent it. Brun spent the next fifteen or twenty years wandering around the rough frontier towns of the Southwest playing in honky tonks, saloons, candy stores, theaters, medicine and minstrel shows. He remembered playing for Buffalo Bill, Cole Younger, Teddy Roosevelt Emmet Dalton and other men of the era. Brun married in 1908 and soon retired from music, moving to Venice in 1928 where he purchased the barber shop he operated until his death in 1953. In the early '40s, Lu Watters' Yerba Buena Jazz Band and the rediscovery and recording of Bunk Johnson sparked a resurgence of interest in traditional jazz.

Upon hearing of Lottie Joplin being in desperate straits, Brun bought an old upright piano for his shop for S50, got back into shape, and issued his first recording on his Brun label of "Maple Leaf Rag" so he could pay royalties to Joplin's widow. He also recorded additional material for his label, for the Echoes label and for Lu Watters' West Coast label (now owned by Fantasy Records). Some of these recordings and others never previously issued appeared on a couple of LPs on the Euphonic label and now appear with additional previously unis-sued performances on this Delmark CD. In his autobiography (in the archives of Fisk University), Brun stated, "None of the original pianists played ragtime the way it was written. They played their own style. Some played march time, fast time, slow time and some played ragtime blues style, but none of them lost the melody, and if you knew the player and heard him a block away you could name him by his ragtime style. I had been taught how to play by Scott Joplin in 1898 when I was 15 years old." If you were alive prior to 1910 and were to walk into saloons or sporting houses of any large city, Brun's music is the style you would have heard. Brun Campbell is the only Joplin student to make records. -PAUL E. AFFELDT