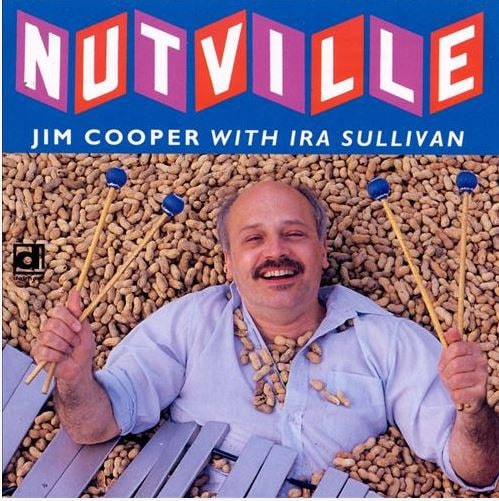 (1991/Delmark) 9 tracks Nutville is one of two 1991 releases by veteran Chicago vibist Jim Cooper. It features the same lineup as its companion, Tough Town, including the versatile Ira Sullivan, whose facility on trumpet and saxophone puts this date a notch above being simply a pleasant set of boppish post-bop. The set is also distinguished by cohesive group work, and strong writing from Cooper and pianist Bob Dogan. As a player, Cooper's harmonic leaps and slightly aggressive attack suggest more the angular approach of Bobby Hutcherson than the fluid grace of Milt Jackson. That said, Cooper and colleagues venture nothing as probing as Hutcherson's work. They play well within the parameters of each piece, creating sweet spots and grooves with attentive interplay and a surefooted melodic sense. Sullivan's entries consistently raise the heat and interest level, but the other players all have worthy statements as well. With the exception of Ivan Lins' ballad 'Cantor Da Noite,' which lapses close to cocktail jazz, the pace is bright and energetic. The title track is a good version of the Horace Silver hard bop classic. Cooper's 'Mallethead' briefly suggests Thelonious Monk's 'Four in One.' The affinity with Monk also pops up in a short take of 'Bemsha Swing,' which is highlighted by Dan DeLorenzo's agile, walking bass. Dogan's up-tempo 'Sui Fumi' and his cruising-paced 'Cabbie Patch' offer effective shifts in tempo and melody, while the Latin beat of Dogan's thoughtfully crafted 'Mija' sets up expansive solos from Cooper and Sullivan. The set is rounded out by the standard 'Autumn Nocturne' -- presented as a mid-tempo swinger -- and a bristling, reading of Dizzy Gillespie's 'Tanga.' (AllMusic)