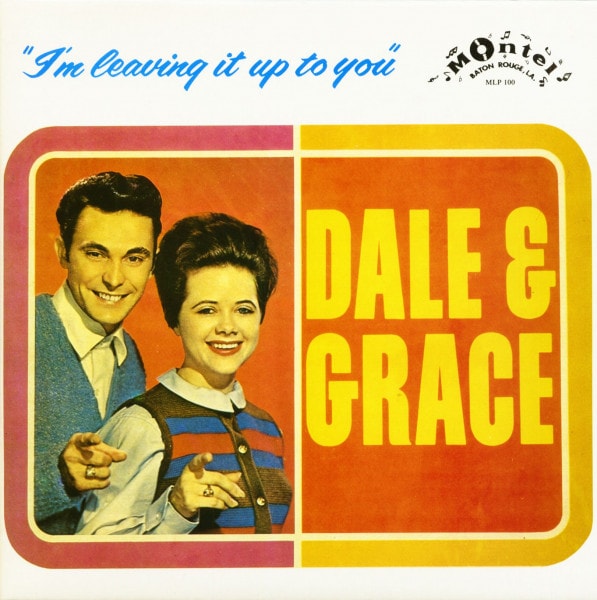 P Jetzt Bonuspunkte sichern
Beschreibung Bewertungen 1
Beschreibung
(Montel) 20 tracks - including the big seller 'I'm Leaving It Up To You' - Reproduction of the... mehr
Menü schließen

It was 2 a.m. and a young couple sat at a piano in Baton Rouge, La., running through some songs they would record the following day in New Orleans. Dale Houston, with his songs out of the way, was helping a young lady with her arrangements that would mean her debut as a single recording artist. But as all musicians will do, the girl, Grace Broussard suggested they sing a couple of old songs together 'Just For Kicks'. Here in the home of record producer Sam Montel, the exciting 'Dale and Grace' sound was born. So impressed by their ability to blend their voices together in a different sound, they were recorded the next day by Sam Montel, and Sam's arranger-guitarist Kenny.Gill. 'I'm Leaving It All Up To You', once played for the Deejays at my station so im-pressed all of us that it was selected as our pick-hit of the week (an honor usually left to the hot labels and their artists), and our judgment was right, as the rest is now history, Dale and Grace were born and Sam Montel, after years of struggling'to get that first 'Big One', controls one of the hottest singing groups in the country.

Now, outdoing themselves Dale and Grace blend their voices together and present for their many new fans a collection of great songs. You'll identify many of the tunes contained herein as hits of the past, but somehow they'll take on a new feeling, a new meaning, and I'm sure you'll agree with me when I say these oldies never sounded better. The same great 'Bayouland' sound that made 'I'm Leaving It All Up To You' one of the biggest sellers in our country is contained in every song in this great album. As for Dale and Grace, their sound remains as fresh an original as it was when you first heard the melody of 'I'm Leaving It All Up To You'.

I know that this particular album will be the favorite of many people, just as it is already my favorite. But I'll invite your comments...or should I coin a phrase and just say: I'm Leaving It All Up To You'!
Chuck 'Baby' Adams, Radio Station K-NUZ - Houston, Texas

Artikeleigenschaften von Dale & Grace: I'm Leaving It Up To You (LP)

Brilliant collection of songs on this album. I love it !