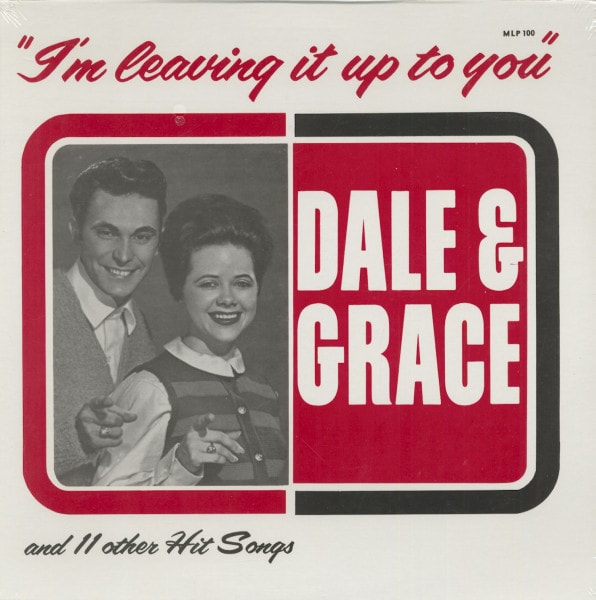 Originally sealed 1963 'Michelle' LP album - This album came out on 'Montel' as well - also in 1963 but with two different songs, which were 'Tip Of My Finger' and 'Gee Baby'

It was 2 a.m. and a young couple sat at a piano in Baton Rouge, La., running through some songs they would record the following day in New Orleans. Dale Houston, with his songs out of the way, was helping a young recording a:vtg her arrangements zernmuesnitItnh: tvvvir clod. meant gih ilerabcuet as Broussard  suggested they sing a couple of old songs together'. "Just For Kicks". Here in the home of record producer Sam Montel, the exciting 'Dale and Grace' sound was born. So impressed by their ability to blend their voices together in a different sound, they were recorded the next day by Sam Montel, and Sam's arranger-guitarist Kenny Gill. 'I'm Leaving It All Up To You', once played for the Deejays at my station so im-pressed all of us that it was selected as our pick-hit of the week (an honor usually left to the hot labels and their artists), and our judgment was right, as the rest is now history, Dale and Grace were born and Sam Monte!, after years of struggling to get that first "Big One", controls one of the hottest singing groups in the country. Now, outdoing themselves Dale and Grace blend their voices together and present for their many new fans a collection of great songs. You'll identify many of the tunes contained herein as hits of the past. but somehow they'll take on a new feeling, a new meaning, and I'm sure you'll agree with me when I say these oldies never sounded better. The same great 'Bayouland' sound that made 'I'm Leaving It All Up To You' one of the biggest sellers in our country is contained in every song in this great album. As for Dale and Grace, their sound remains as fresh an orig.inal as it was when you first heard the melody of  'I'm Leaving It All Up To You'.
I know that this particular album will be the favorite of many people, just as it is already my favorite. But I'll invite your comments...or should I coin a phrase and just say: 'I'm Leaving It All Up To You'!
Chuck 'Baby' Adams - Radio Station K-NUZ- Houston, Texas

On behalf of Michelle Records I would like to thank the rest of the team for helping make this album possible: Carol Rachou of La Louisiane Recording. Cosimo Matassa of Cosimo Recording, Bill Holford of ACA Recording. Kenny Gill for his outstanding technical arrangements, The Lively Sisters. Leo O'Neil, Paul Berlin. Ken Elliot and Tommy Guarino. I would like to personally thank Huey Meaux, the south's most successful record producer and promotion man, for his keen ear in selecting  'I'm Leaving It All Up To You' as a hit, and all the wonderful distributors and DJ's and last but not least, Dale & Grace.
Sam Montel, Producer

Artikeleigenschaften von Dale & Grace: I'm Leaving It Up To You (LP)