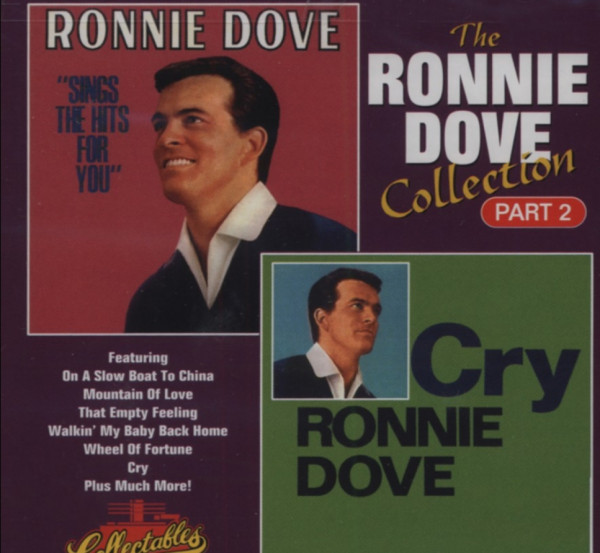 Ronnie Dove: Sings The Hits For You - Cry

Artikeleigenschaften von Ronnie Dove: Sings The Hits For You - Cry

Born and raised in Herndon, Virginia, Ronnie Dove heard the roar of applause at an early age. After singing "Away In A Manger" in a grade school play, he knew he wanted to be a singer. He joined the glee club and during high school he sang with a group called The Rockers. After graduation he joined the U.S. Coast Guard and was stationed on a buoy tender off the coast of Baltimore. During this four-year period he would visit the local clubs and request to get up and sing for the audience. One of these clubs, a place called Elmer's, was so impressed with the reaction of the crowd that they hired him. He was now making five dollars a night singing Elvis covers on his evenings off. Leaving the Coast Guard in 1959, he formed a group known as Ronnie Dove & The Belltones and had his first release with a song he wrote called "Lover Boy". The group devoted the next four years to playing the club circuit as often as seven nights a week, becoming one of the hottest acts in the Baltimore area. In the fall of 1963, Ronnie parted ways with the band and headed for Nashville.

He was signed to Phil Kahl's Diamond Record label and shortly thereafter he recorded "Sweeter Than Sugar", an uptempo song that did not see much success. Diamond followed this with "Say You" and "Right Or Wrong" and Ronnie had found his forte - the ballads. Followed by such songs as "One Kiss For Old Time's Sake", "Little Bit Of Heaven" and "When Liking Turns To Loving", Ronnie had achieved star status. In 1965, voted by Cashbox and Billboard to be the "Best Male Vocalist", "Top Singles Artist", "Top Easy Listening Artist" and also "Best R&B Vocalist", the awards and hit songs just kept coming. Ronnie's success was doubly impressive during this time, due to the almost complete domination of the charts by British rock groups. Both Beatle-worshipping teens and their Beatle-hating parents fell in love with Ronnie Dove. Teenage girls fell asleep at night listening to Ronnie Dove songs and dreaming of their dark-haired, blue-eyed idol.

During the next ten years he was either in the studio, touring or debuting on prestigious radio and television shows such as Mike Douglas, Mery Griffin, American Bandstand, and Ed Sullivan. He performed on countless tours with Dick Clark, Shindig and Where The Action Is. With the growing popularity of disco music in the mid-'70s, Ronnie took a needed and well-deserved hiatus. He bought a home in Augusta, Georgia, and did something he had yearned to do for a long time - learn to play golf. Not able to get far from his love of music, he still worked local clubs occasionally to keep his voice in shape. In the early 1980s, Ronnie moved to Nashville and recorded a few country-flavored songs with mild success. Then came the resurgence of the "golden oldies", which prompted Ronnie out of retirement. Touring again and sounding better than ever, he was soon filling venues with more than 5,000 fans per show. Then in 1989, he was dealt a shocking blow. His mother, who had been his most devoted supporter through the years, was diagnosed with two aneurysms and given only three to six months to live. Ronnie again took time off from his career to take care of her. His mother lingered on for two more years with Ronnie by her side tirelessly.

After her death in 1991, he again started touring throughout the United States and Canada. Music seemed to be the only thing to keep him going. Still touring today, Ronnie has just recently achieved another dream of his. He has opened a nightclub called "The Dove's Nest" in Baltimore, where it all started for him. Singing his hits from the sixties and other country-flavored tunes, the fans still keep coming. There are lots of the baby-boomer fans from that era, as well as younger fans who just can't get enough of this terrific talent. Today, although his good looks have matured, this veteran performer hasn't lost his voice, enthusiasm or his public appeal. He still makes every lady feel that he is singing just to her. Included in this set are songs that are sure to bring back lots of fond memories. This is Ronnie Dove as you've never heard him before. So sit back, relax and enjoy music as it is supposed to be. Ronnie still receives fan letters and enjoys reading them all.