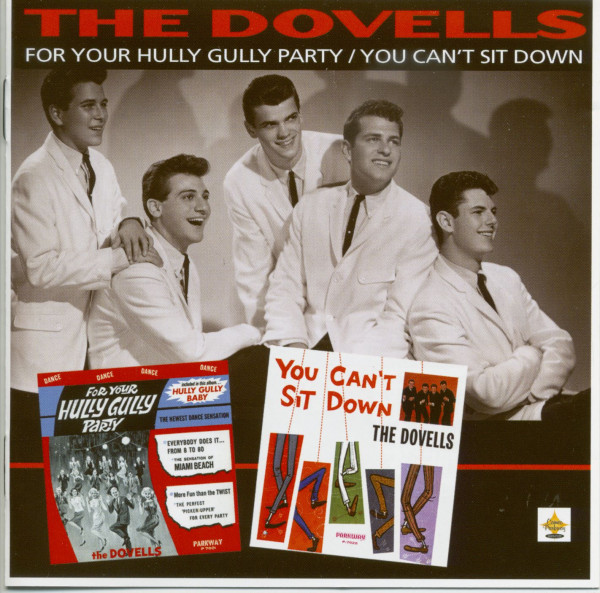 The Dovells: For You Hully Gully Party - You Can't Sit Down

Artikeleigenschaften von The Dovells: For You Hully Gully Party - You Can't Sit Down

Erfahre mehr über The Dovells
The Dovells Bristol Stomp If not for a persuasive promo man who was hip to the latest... mehr
Menü schließen
"The Dovells"

They rehearsed at the record shop of John Madara, singer and co-writer of Danny & The Juniors' '57 smash At The Hop, their repertoire strongly favoring R&B and doo-wop standards. Jerry, Mike, and Mark eventually split to form another group, The Gems. The remaining Brooktones reformed around Barry, bringing in two new members. An audition at Philly's Cameo-Parkway Records won them a contract in December of 1960. They began work on their jumping debut, Len's No No No, at Philly's Reco-Art Studios in February. But the new members weren't cutting it, so Len asked Jerry to rejoin the group. Jerry suggested bringing Mike back in as well.

The original group was back together, but they'd record under a new name. Cameo-Parkway co-owner Bernie Lowe had just stayed at the Deauville Hotel in Miami Beach, so he suggested changing the group's name to The Deauvilles. The group thought that too hard to spell, so they settled on The Dovells. Recording at the label's in-house studio that July, promo man Billy Harper stormed into the studio, animatedly talking about a new dance called The Stomp the kids were doing at the Goodwill Fire Hall in Bristol. They stomped to a 1958 platter by The Students, Everyday Of The Week, that sported a very distinctive guitar intro.

Label co-owner Kal Mann and A&R man/arranger Dave Appell fashioned Bristol Stomp overnight, leaning heavily on The Students' platter as a template (a revival of Frankie Lymon and The Teenagers' '57 hit Out In The Cold Again occupied the opposite side). Barry's distinctive lead and the choppy beat translated into a smash that went a lot further than Philly: #2 pop and #7 R&B nationally that autumn. Suddenly the whole country was doing the Bristol Stomp.