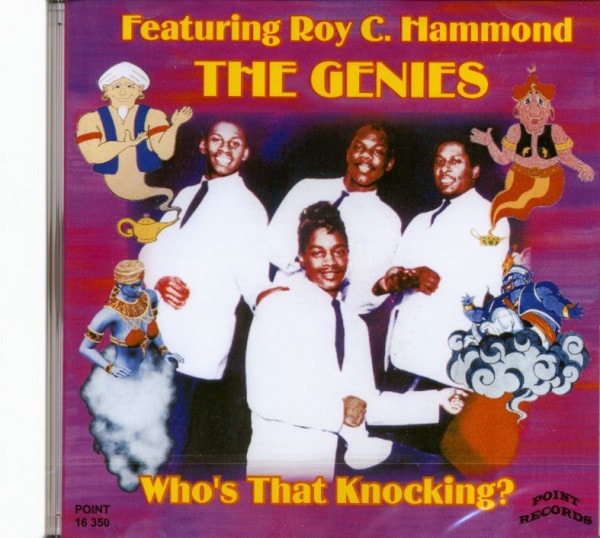 GENIES: Who's That Knocking (CD)

Erfahre mehr über GENIES
The Genies Who's That Knocking Two-fifths of The Genies were a lot more successful after... mehr
Menü schließen
"GENIES"

Two-fifths of The Genies were a lot more successful after they left the group than when they were part of it. But the quintet did wax one certified classic for Bobby Shad's fledgling self-named label before they went their separate ways.

The boardwalk at Long Beach, Long Island was where The Genies started in 1956. First tenor Roy C. Hammond, second tenor Bill Gains, baritone Alexander 'Buddy' Faison, and bass Fred Jones invited Brooklynite Claude Johnson to join them on lead tenor. Johnson came up with their distinctive name. Frequent off-hours rehearsals at a local employment agency honed their sound, and when former Sittin' in With label boss Shad caught them harmonizing on the Long Beach boardwalk in 1958, it led to them signing with his new label.

Johnson and Jones penned their debut platter Who's That Knocking with veteran arranger Leroy Kirkland (that's the way the original label read; BMI no longer lists him). Sung by the whole group, the snappy New York rocker sat on the shelf for nearly a year before Shad pressed it up with the ballad The First Time, by the same writing trio, on the other side. It finally hit the streets in late January and entered the pop charts two months later, peaking at #79.

Midway through an engagement at the Apollo, Gaines disappeared, making The Genies a quartet. They made a sequel, No More Knockin', for Hollywood Records that August, backed with On The Edge Of Town. Morty Craft's Warwick logo pressed up three more Genies singles: There Goes That Train b/w Crazy Love and Just Like The Bluebird b/w Twistin' Pneumonia in 1960 and Crazy Feeling b/w Little Young Girl the next year.

After The Genies broke up, Claude teamed with Roland Trone to sing duets and paint houses. They were happily harmonizing while slapping a new coat on the walls of an apartment when a tenant hooked them up with agent Peter Paul. Next stop: Big Top Records, where as Don & Juan the duo had a 1962 smash with the lovely What's Your Name (the bopping Chicken Heads, cut in an early unissued incarnation by The Genies, was its flip). Hammond went by Roy 'C' when he had a '65 R&B hit with the bluesy Shotgun Wedding and also nailed several '70s hits for Mercury. Who's That Knocking had a second life as the climactic title theme of director Martin Scorsese's first film feature in 1967, 'Who's That Knocking On My Door.'