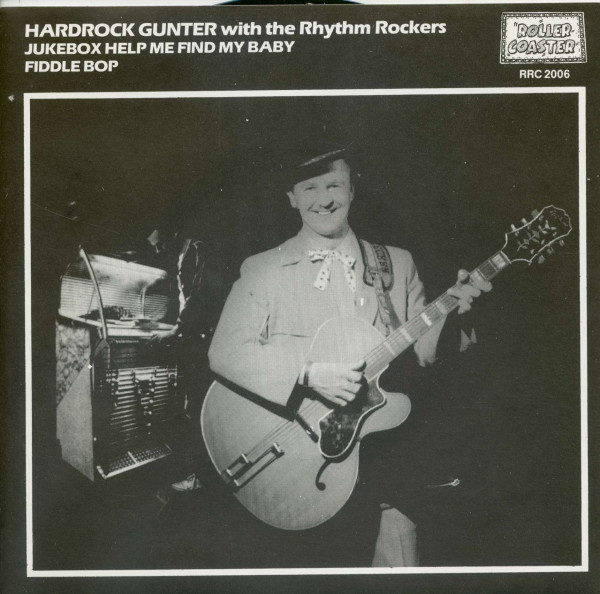 (Rollercoaster Records) 2 tracks 1956 - picture sleeve - small centerhole.
-
'This is Rock Gunter from Denver, Colorado; my address is actually Golden, a town which nestles at the foot of the Rocky Mountains, which is about 18 miles from the heart of downtown Denver.

Jukebox Help Me Find My Baby was cut in 1956 at the VVWVA studios in Wheeling, West Virginia-it's a multiple dub recording, that is we didn't have the benefit of recording on separate tracks as they do today; it was recorded with Buddy Durham beating on a box with a letter opener and I was playing guitar. Then I played guitar with a piece of paper wrapped around the strings to get the percussive sound
and Bob Tuston of the Wilma Lee & Stoney Cooper Clinch Mountain Clan band was on bassfiddle.

I used the Southern brogue in those days, I wasfrom Birmingham, Alabama, and I said 'jukebox hep me hep me hep me find my baby'. I leased the master to a little label called Cross Country-the record took off immediately in the North Eastern part of the United States and became the numberone record at WERE, where Bill Randle had a very popular radio show at the time. My old friend Sam Phillips got excited about it and through another friend, Nat Tannen, arranged for the original to be leased to the Sun record company. Well, I was delighted because I really thought I had something and I had done everything I knew to make a commercial recording. First of all it was a little ahead of its time-the song was about dope, 'some monkey took my baby, hooked my baby, shook my baby, showed mybaby round'.

The story is about a gal going from honky tonk to honky tonk and she's hooked and the guy, the singer-me-I'm looking for my baby; my baby's hooked and she's lost to me, so I am asking the jukebox to look for her as she comes round juking every night. Well, Sam got the masterand he called me to say it was great and how did I get the sound 'which was unreal'; I told him it was a little secret! Bill Randle was on a Mercury session or helped conduct a Mercury session with several artists-I believe the Crewcuts tried to record it and they worked all night trying to get the echo sound that I had with the wishywashy echo voice and the fantastic offbeat with the rhythm section.

New York got excited and naturally in those days being a disc jockey at WWVA, I thought that if New York got excited the music world would get pretty enthused. Well, I got a call from Sam and he said, `Rock, the record'stoo long' and all of a sudden my heart started to sink. I had put a rhythm sound on Jukebox by mouth; back in the old days we used to sit around down South and play nothing but a guitarand wash-board which is about the sound I got on the record.

We'd sit around with the blacks in the back alleys picking and laughing as we'd call it, playing a little rhythm with different people beating on cigar boxes and one thing and another. I tried to imitate that type of sound by using a vocal effect which is the bass sound you hear on the record. Sam cut that out because it was too long and also another section towards the end where the rhythm section is rockin' along and Bobby Tuston is playing bass, I'm playing guitar, Buddy Durham is whacking on the box and at the end of it you heard me say `Baby'- in shortening the record and cutting that out, I sincerely feel that through no plan we cut the hit right out of the record, and I'm happy that the original version has now been re-released by Rollercoaster.

Anyway, I think this tune should have been a number one record in the United States at the time and . well, I think you would agree that it does move...'

Although Sidney 'Hardrock' Gunter's 1950 hit Birmingham Bounce was something of a precursor to rockabilly and rock 'n' roll sounds of a few years later, and he has received a certain amount of attention from rockabilly enthusiasts over the years, that attention probably hinges largely on the happy accident that he happened to record for the legendary Sun label than any actual importance to the genre. Plenty of artists who have received far less attention were recording music that rocked just as hard and looked as prophetically forward.

That said, the versatile and engaging Gunter (b. 1925 and a professional since the late 1930s) has had a long and varied career, including a lengthy stint at the WWVA Jamboree, and though this unissued fiddle-driven instrumental Juke Box Shuffle, from about 1960, isn't really a very telling example of Gunter's prowess as a rocker, it does nicely showcase his excellent, deft hot guitar picking. 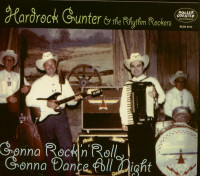 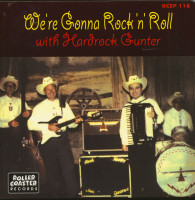