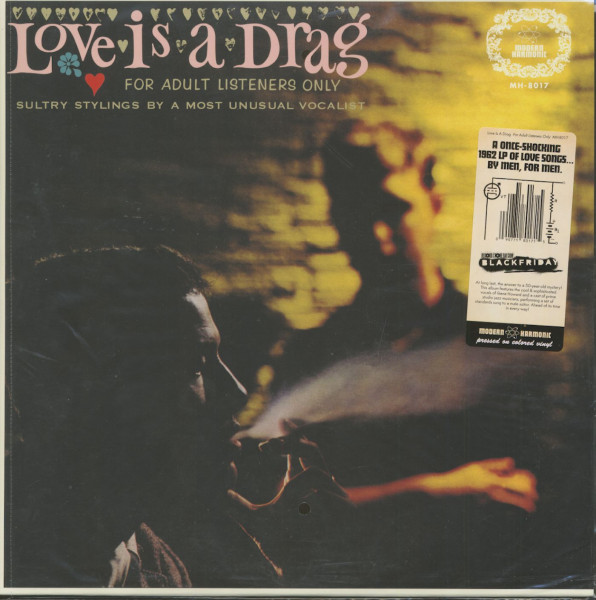 A once shocking 1962 LP of love songs by men, for men. A long lost treasure featuring the cool & sophisticated vocals of Gene Howard and a cast of prime studio jazz musicians, performing a set of standards sung to a male suitor. Ahead of its time in every way. Reissued for the first time ever! Available on CD and pristine RTI pressed gold vinyl! A fantastic, once-shocking album finally sees reissue - and brings with it the answer to a half-century mystery! Case file: A big band vocalist, a Hollywood photographer, and an LGBT music and history archivist - they are the heart of the story behind Love Is A Drag, a 1962 shrouded-in-mystery long-player comprised of love songs by men, for men. Decades ago, JD Doyle, renowned LGBT music historian and archivist, happened upon a copy of Love Is A Drag. Resonating with him immediately, the album presented compositions such as The Man I Love and Mad About The Boy, (songs that were intended to be sung by a woman to a man), and featured them as songs performed by a man to another man.

Doyle would often play cuts from it on his radio show, Queer Music Heritage. He remained intrigued by the lack of either artist or producer credited on the album. A vague line of jacket text ambiguously announced, For Adult Listeners Only - Sultry Stylings by a Most Unusual Vocalist. And, the facts behind the album would have most likely remained unclear if it were not for one Murray Garrett (Hollywood star-photographer through the late 1940s to the 1970s). Out of the blue, Murray Garrett contacted JD Doyle and wanted to talk about the album. According to Garrett, through his photography career, he had forged a friendship and partnership with prolific big band vocalist, Gene Howard. The two worked together on projects, eventually teaming with Jack Ames, founder of Edison International Records.

When queried for ideas for a potential Edison International release, Garrett recalled a performance he had once seen in Greenwich Village - a performance of a man singing love songs to another man, in serious fashion, i.e., not at all campy or overly-dramatic. Gene Howard (straight and happily married!) agreed to sing on the record, accompanied by a whos-who of Los Angeles A-list session men. Completed, the record was issued on a surrogate label named Lace Records - an imprint hastily-created in order to avoid any misinterpretation of the Edison International focus. Upon release, the record sold well in Hollywood, with Frank Sinatra, Liberace, and Bob Hope among its biggest advocates. With the masters proudly owned by Sundazed, Love Is A Drag is now set to make its long-overdue reappearance. Presented on our new Modern Harmonic imprint - we give you both a pristine gold vinyl RTI pressing and a handsome CD edition, including original artwork and notes, and insightful new liners from LGBT historian, JD Doyle! On HQ RTI pressed gold vinyl! 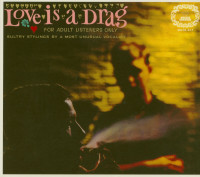