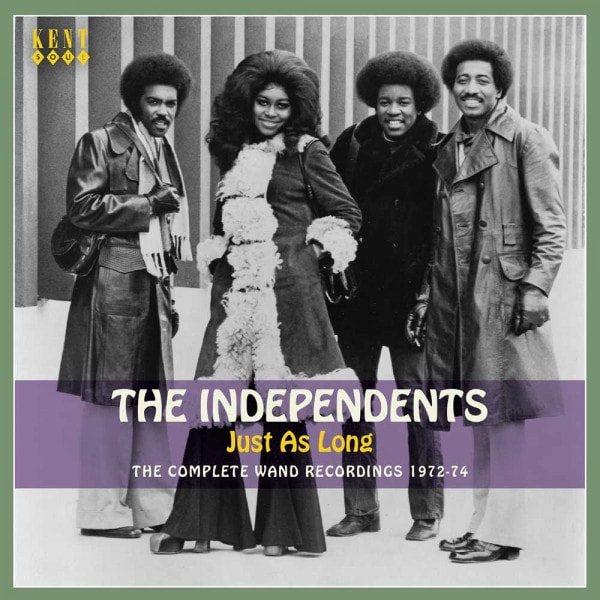 The Independents: Just As Long - The Complete Wand Recordings 1972-74 (CD)

Never one to rest on his laurels, singer Jerry Butler knew first-rate songs were the key to sustaining his hitmaking ways. He founded a songwriters’ workshop that gave a boost to several talented young Chicago composers, including Chuck Jackson (not the big-voiced New Yorker who hit with Any Day Now) and Marvin Yancy.

This Chuck Jackson, born March 22, 1945 in Greenville, South Carolina, was the brother of Rev. Jesse Jackson. At one of the reverend’s events, he met Yancy, born May 31, 1950 in the Windy City. The two sat down at Butler’s workshop and wrote Just As Long As You Need Me. Former Impressions manager Eddie Thomas convinced Chuck to sing it himself. That’s how The Independents were born.

Chuck and Marvin, who doubled on piano, added Maurice Jackson (no relation to Chuck, he was born June 12, 1944 in Chi-Town and had been a solo artist with a Donny Hathaway-arranged single, Lucky Fellow, on the Lakeside and Candle Lite logos) and Helen Curry. Thomas’ judgment was confirmed when the uplifting Just As Long As You Need Me, Part 1 climbed to #8 R&B in the spring of 1972 on New York-based Wand Records (Jerry’s brother, guitarist Billy Butler, shared authorship). I Just Want To Be There charted for them before year’s end.

The Jackson/Yancy-penned Leaving Me vaulted to #1 on the R&B charts and #21 pop for The Independents on Wand during the spring of ’73. Cut at Paul Serrano’s P.S. Studios in Chicago with arranger Tom-Tom Washington providing a lush backdrop, it was a ballad with an easy sway. Leaving Me went gold, making The Independents stars. Utilizing Chicago’s top arrangers (notably Floyd Morris, Richard Evans, and Tom-Tom) in their quest for more hits, they came right back with the #4 R&B charter Baby I’ve Been Missing You that summer and a #12 R&B entry in the fall, It’s All Over. Yancy had receded into a behind-the-scenes role, Chicagoan Eric Thomas taking his place for The Independents’ sophomore set.

1974 brought three more R&B hits for the group, all again on Wand: The First Time We Met, Arise And Shine (Let’s Get It On), and the #7 seller Let This Be A Lesson To You. Before long, Chuck and Marvin would have another priority that finished off The Independents: masterminding the rise to stardom of Natalie Cole.