(2017/Modern Harmonic) 10 Tracks - Digipack! Beyond Hip! From Cool Jazz to Hard Bop! This extraordinary soundtrack, featuring many of the finest jazz musicians this side of anywhere, is a collection of small ensemble and large band arrangements so perfectly indicative of its era. It’s beyond hip and runs the gamut from cool jazz to hard bop. Moreover, it authorized the virtuosic freedom of the best of New York’s jazz community. The swingingly cinematic score was commissioned for a Sexploitation classic entitled Satan in High Heels, the story of a woman caught in the decadent nightlife of the Big City. Mundell Lowe’s compositions aptly complement and enhance the story’s mood and atmosphere while often juxtaposing humor with strains of profound symbolism. The score, a stellar example of “jazz noir” however, is never decaffeinated. It’s relentlessly vibrant and engaging. Mundell Lowe’s virtuosity knows virtually no bounds. His comprehensive and artistic musicality has placed him in among the top players in jazz. In addition to working at both NBC and CBS in New York he was the staff guitarist for Dave Garroway’s original Today Show. Both the film, and this score are respective examples of classic cult cinema. The music is often sensuous and sexy but at times as tough as a two-dollar steak. It’s the real deal. 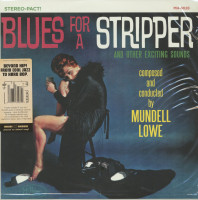 Tracklist
Lowe, Mundell - Blues For A Stripper (CD) CD 1
01 Blues For A Stripper
02 From Mundy On
03 Montage
04 Coffee, Coffee
05 The Lost And The Lonely
06 Pattern Of Evil
07 Satan In High Heels
08 East Side Drive
09 Lake In The Woods
10 The Long Knife
Funktionale