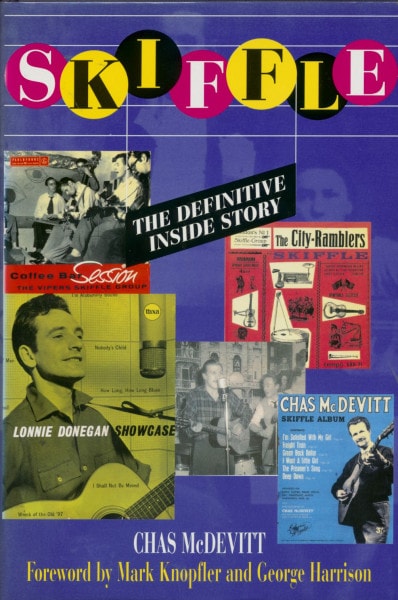 Skiffle is the first book in 40 years to document the rise and fall of the Skiffle craze that began in the 1950s. Written by one of the original 'Skiffle Kings', it is a first-hand account of the Skiffle phenomenon from its formative days in jazz clubs and coffee bars to international acclaim in places such as the Royal Festival Hall and the Ed Sullivan Show.

The origins of Skiffle lay in the music of the migrant workers of the 1920s and 30s who had left their homes in the southern states of America seeking work in the more affluent and less prejudiced cities of the north, such as New York, St Louis and Chicago. Carrying their musical heritage with them, whether it was the Mississippi blues, the work song or the barrelhouse ballad, a wealth of household `instruments' augmented the ever-present guitar and piano, including the washboard, gut bucket or the tea chest bass.

Yet it was Lonnie Donegan's commercial success decades later with 'Rock Island Line' that led to an explosion of interest in this forgotten sound. Since then, its influence has been profound as many leading musicians acknowledge in this book, including George Harrison, Mark Knopfler, Paul McCartney, Van Morrison and Hank Marvin.
In this thoroughly comprehensive and extensively illustrated guide, Chas McDevitt tells the inside story of this musical phenomenon, tracing its development and remarkable impact on popular music.