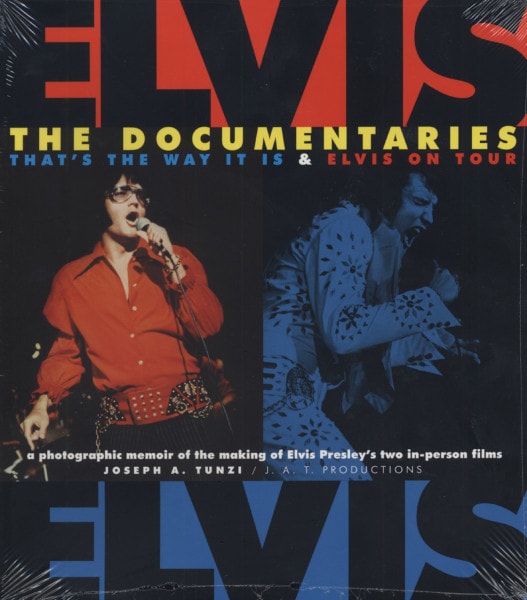 (2005/TUNZI) Paperback, 23x26 cm, 134 pages, b&,w photos (few color) plus discographies and sessions of 'That's The Way It Is' &, 'Elvis On Tour' by Joseph A.Tunzi .
,-
After 31 theatrical films Elvis Presley would go on to make two motion picture documentaries: Elvis, That's The Way it Is and Elvis On Tour. Elvis, That's The Way it is, originally titled Elvis, was based on his August 1970 Las Vegas opening, while Elvis On Tour, originally titled Standing Room Only, showcased Elvis the performer on the road in April of 1972. If memory serves me correctly, back in 1970 the title That's The Way it Is was added and adapted from legendary CBS newscaster, Walter Cronkite. Mr. Cronkite ended his nightly newscast saying, "And That's The Way It Is," also including the date and year of his broadcast. Elvis was a regular viewer of Cronkite and along with Colonel Parker decided to use what was becoming a popular catch phrase in U. S. media circles.
Elvis On Tour would prove to be more successful, earning Elvis his first major motion picture award: the Golden Globe® for Best Documentary of 1972 an award Elvis would greatly appreciate.
,-
These two great Elvis films captialized on the trendy documentary film craze that produced such titles as Woodstock, the Beatles' Let It Be, and Joe Cocker's Mad Dogs and Englishmen. /V ad Dogs and Englishmen was done by filmmakers Pierre Adidge and Robert Abel, who also produced Elvis On Tour. While nothing can match the feeling I had witnessing Elvis numerous times performing live on stage, back in November 1970 I went to a special screening of That's The Way it is in downtown Chicago at the Esquire Theatre, and it was magical. In 1972,1 had the opportunity to do it again for Elvis On Tour. I enjoyed these films so much that I went back to the local theaters to watch them again, and again, and again. It was a great time to be an Elvis fan and as that fan I bring you Elvis The Documentaries. And That's The Way It Is, September 8, 2005 . . . Joseph A. Tunzi