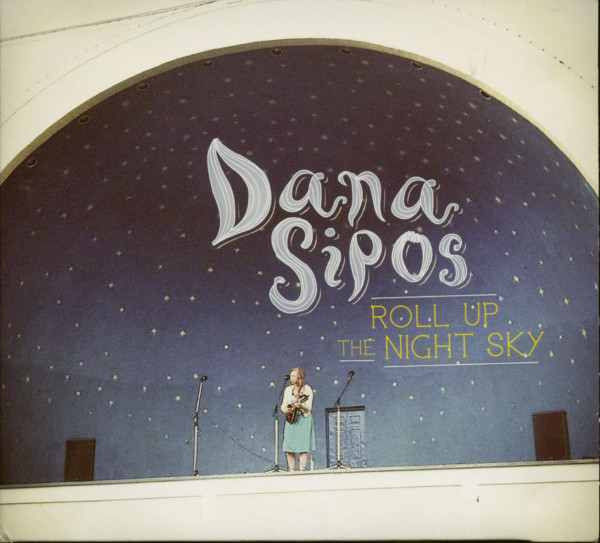 (Muddy Roots) 12 tracks (58:22) digisleeve with all lyrics.
-
Spending her formative years in the Canadian subarctic city of Yellowknife, Dana Sipos' songwriting is infused with a real sense of surrealism best influenced by the supernatural experiences of Canada’s high country. On her newest album, Roll Up the Night Sky, Dana beguiles and charms, weaving fragments of stories, myths and dreams into the imagery of the Northern Territories, creating nuanced songs that map heart and country and the spaces between.
-
Although Dana Sipos still considers these Canadian territories her home, she has been nomadic for the past few years, with an unconventional traveling style, touring by tall ship and bicycle, and currently planning tours by canoe and train. As musician-in-residence at the renowned Banff Centre in the Canadian Rockies, she spent a few months collaborating with an impressive array of musicians before teaming up with Yukon producer and multi-instrumentalist Jordy Walker (Tanya Tagaq, Little Scream) to bring her new album to life. Recorded in the home studio of Richard Reed Parry of Arcade Fire over a cold Montreal winter (with additional tracking at the Barr Brothers’ Montreal studio), Roll Up the Night Sky’s twelve tracks, now being released on indie Nashville label Muddy Roots Recordings, are a lot like the place they were recorded in – full of old instruments, old soul, and an unmatched creative energy.
-
In creating Roll Up the Night Sky, Dana Sipos draws from a range of musical inspirations with primarily strong female musicians at the forefront: next generation Icelandic artist Sóley, old school trip-hop band Portishead, Danish songwriter Agnes Obel, and Appalachian music re-inventors Gillian Welch and Sam Amidon. The new songs, accompanied Sipos’ innovative guitar, bouzouki, and three-finger mandolin picking style, sometimes bring to mind Natalie Merchant’s early work, or perhaps a more folk-influenced Fiona Apple. Sipos’ hauntingly hopeful lyrics artfully walk the tightrope between the real and the absurd, as heard in the song “Night Sky”: ‘Roll up the family history, leave it out to dry, roll up the night sky, replace the stars with your fire eyes, roll up the night sky, hang the moon in your bedroom”. Sipos’ indie songwriting is that of a true songsmith, using both ordinary and surreal expressions that are captivatingly calm, yet filled with a wild wind.