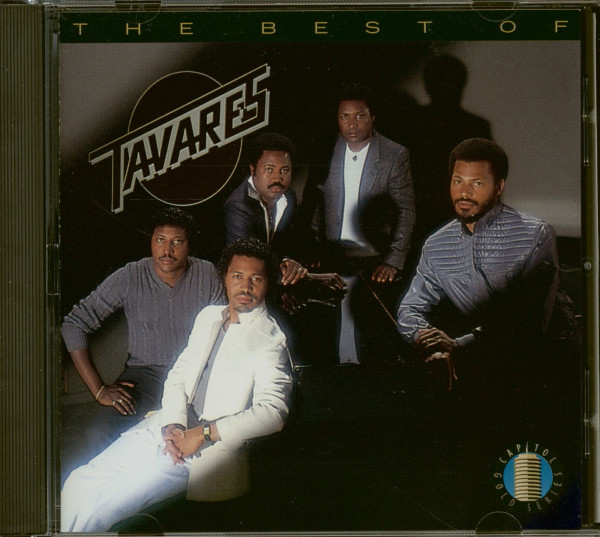 Tavares: The Best Of (CD)

It Only Takes A Minute

It Only Takes A Minute

Brother acts were still in vogue, The Jackson 5 setting the pace. So the emergence of Tavares was a natural.

They made their soulful debut as Chubby and The Turnpikes for Capitol in 1967; the Marvin Holtzman-produced I Know The Inside Story Vibrations lead singer Carlton Fisher was its co-writer, and it was arranged by Chicagoan Sonny Sanders. The smooth ballad Nothing But Promises, credited only to The Turnpikes, followed the next year (the group made it a practice to alternate lead vocals).

During an Italian tour, the group switched its name to Tavares because no one there knew what a turnpike was. The new moniker neatly paid tribute to their singing father Feliciano ‘Flash’ Tavares, who specialized in Cape Verdean music, as well as their own family surname. At a Chicago songwriter’s workshop headed by Jerry Butler in 1972, Tavares cut a demo of Check It Out. Their new manager Brian Panella used it to get the siblings back on Capitol, only this time they would serve up hits non-stop.

A fresh Check It Out produced by Johnny Bristol in L.A. made it to #5 R&B in 1973, followed by the Top Ten R&B entry That’s The Sound That Lonely Makes (also from their debut LP). A switch in producers to Dennis Lambert and Brian Potter preceded the release of Too Late (another Top Ten R&B hit) and their first R&B chart-topper, a cover of Hall & Oates’ She’s Gone. They were right back at #4 the next year with Remember What I Told You To Forget, scribed like Too Late by their producers.

It Only Takes A Minute, another Lambert/Potter copyright, marked the second time the siblings sat atop the R&B hit parade in September of ’75, only this time they at last crossed over to #10 pop. The brothers were immersed in the disco wave on this one, their fleet-footed choreography as slick as arranger/keyboardist Michael Omartian’s musical backing (the band included L.A. vets Dean Parks and Larry Carlton manning the guitars, bassist Wilton Felder, and drummer Ed Greene).

There were a raft of big Tavares hits on Capitol after that: Free Ride (a cover of The Edgar Winter Group’s rocker), the Freddie Perren-produced ’76 million seller Heaven Must Be Missing An Angel (Part 1), the R&B chart-topper Whodunit the next year, 1978’s Never Had A Love Like This Before, and Bad Times in ’79. Moving to RCA in 1982 seemed to precipitate their fade; they only had one Top Ten R&B entry, Deeper In Love. Ralph quit and Tiny went solo, leaving Chubby, Pooch, and Butch to uphold the Tavares name in concert.