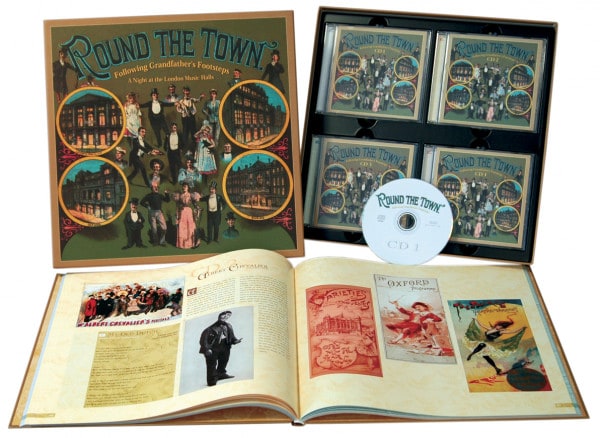 Round The Town - Following Grandfather's Footsteps - A Night at the London Music Halls When Mr. Edison's recording machines arrived in Britain, the industry they would spawn lay undreamed of far in the future, Edison seemingly having little concept of the machine's usefulness other than as an office tool. However, even in those early days, when voices, eminent and otherwise, recited words grand and otherwise, into gramophone horns, occasionally someone would lapse into song. When they did so, as likely as not it would be a music hall song that would issue forth. Paul Tritton has written of the first demonstrations of Mr. Edison's wonderful new invention in his book 'The Lost Voice of Queen Victoria' (Academy Books, 1991).

During one of the first of these demonstrations, before the Physical Society on 2nd March 1878, a Mr. Pidgeon sang a chorus of G. H. Macdermott's contemporary patriotic music hall song, "We don't want to fight but by jingo if we do, the Russians shall not have Constantinople!" into the machine. The voice of Queen Vic herself may or may not be lost – I've read the book and I'm still not sure – but the wonderful new medium of sound recording, then in its infancy, allowed the voices of many of her subjects, the popular performers of their day, to be preserved for posterity.

The aptly named Mr. Pidgeon was not alone in seeing popular comic songs as a suitable subject for recording. His choice of a music hall ditty for his recorded effort was not so surprising for, along with the drawing room ballad, the comic song was the popular song of the day. Music hall had risen from its mid-century beginnings, literally a room attached to a public house, to a huge network of plush Palaces and less magnificent local halls. Bills at these halls included magicians, jugglers, instrumentalists, dancers, short sketches, and some speciality 'turns' rather more difficult to describe. The backbone of any music hall bill, however, was a roster of comic singers.

Sure enough, as the recording industry developed from minor blip to major business concern, music hall artistes and songs were among the early contributors to companies catalogues. In 'Music Hall' (Issues 2 and 4), Frank Andrews has chronicled early recordings by Charles Coborn and Albert Chevalier made, mainly for demonstration purposes, before 1895. Relatively few people, though, owned phonographs or gramophones until prices were lowered around 1909, when machines shifted from luxury status to affordable accessories and record sales rose significantly. Just as we have seen in our own time, when colour televisions, video recorders and CD players were the possessions of the few until drastic price reductions made them available to the masses, so it was with early recording machines, whose evolution followed the same price equals popularity path.

Recordings were made by music hall artistes in the earlier period (from about 1898) but those who could afford machines tended to be among the rather better heeled with highbrow tastes, more likely to buy classical records than music hall material. As the potential audience for such fare was effectively put off purchasing by prohibitive prices, the recordings made by music hall artistes in the early period are rare to the point, in some cases, of non-existence. Where copies of these early recordings have survived, they need not only to be prized and preserved, but, as with all historic documentation, the music contained within their rare grooves should be made available to those who wish to hear them. While there is probably nothing actually unique in this collection, many of these tracks will have evaded even the long-term collector – who, of course, will have similarly scarce items that have eluded my searches!

Most music hall artistes actively performing in the recording period ventured into a recording studio at some period in their career, although some did not choose, or were not chosen, to repeat the experience. Unfortunately the fruits of some of these sessions, e.g. the five cylinders known to have been issued from T. E. Dunville's 1904 session, remain undiscovered to this day to the best of my knowledge. I would welcome information to the contrary on such scarcities, as there is a distinct danger that some of music hall's most famous voices, known to have been captured by the nascent recording industry, are now stilled for good. It would be good news indeed to find that some, at least, of these items have eluded the dustbins of the world. 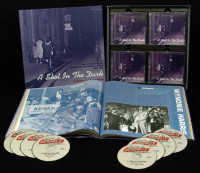