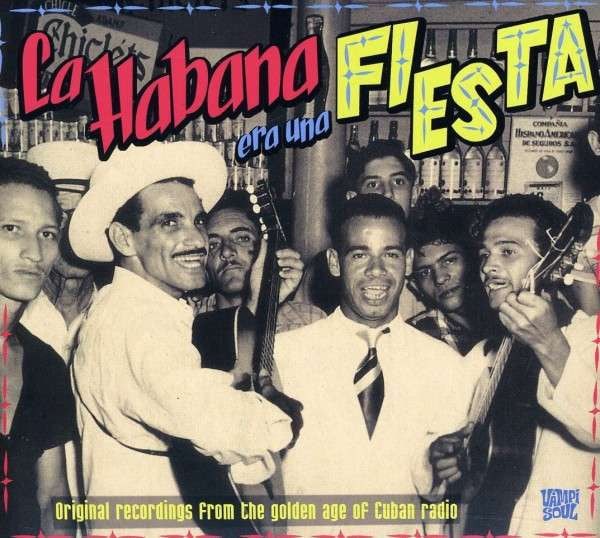 (2011/Vampisoul) 36 tracks digipac with 20 page booklet.
Original recordings from the golden age of Cuban radio: Double CD of 1940s and 1950s recordings made at various Havana radio stations where Cuban musicians were playing Spanish songs and viceversa, Spanish artists that went to Cuba got influenced by the Cuban feeling. It's an anthropological labour of love by legendary Spanish music producer Mario Pacheco, originally intended to come out on his Nuevos Medios record label until Mario passed away last December. All tracks previously unreleased.
-

When Havana was a party, many Spaniards joined the dance. In this process of transculturation, which came from way back, music and musicians played an essential part. Having arrived from Spain, artists of the song and theatre contributed to define the DNA of Cuban popular music. At the same time, other musicians brought in essential aspects of Afro Cuban folklore to the Spanish song. In a stroke of ineffable good fortune, music has always played an intrinsic role between Cuba and Spain.

It was an elemental process: after the Spanish disaster of 1898, emigrants and soldiers, wine-producers and sailors arrived or stayed in Cuba, and with them their customs and habits. With the children of the metropolis, the companies of popular singers, zarzuela groups, and costumbrista theatre arrived. Also the music from Andalusia, traditional dancing, and genuine flamenco soon disembarked in the port of San Cristóbal de la Habana. On their way back, when they left Cuba, the ships with the gold from America also carried new melodies and rhythmical cells, harmonic gyrations, and choreographed elements of Afro-American inspiration.

On firm ground, the native Spanish colony in Cuba kept growing in numbers and importance. Half a century later, there were five million residents in Cuba. At the beginning of the 50s, one million of them resided in Havana. And there were 120,000 people who were associated to one of the many emigrant clubs founded in the city. It was there, in the halls of the societies of emigrants from Galicia, Asturias, Andalusia and the Canary Islands, where the music from both shores embraced. In décimas and folk songs, the poetic expression of Cubans and Spaniards took root on the singers' island. The landing of Spanish music in Cuba stood out in Havana with musical theatre of which operas and zarzuelas were always played as if in the old country.

The visits from Carmen Amaya, Conchita Piquer, Juanita Reina, and Imperio Argentina were lauded. From the mid-30s until approximately 1960, leading Cuban radio stations such as CMQ and Radio Progreso hired the most famous Spanish artists (and also many hustlers who came to America looking for riches) to broadcast the performances and variety shows with live music of Los Chavales de España, Los Bocheros or Los Churumbeles. The extensive reach of radio and cinema, together with the growing popularization of vinyl, enabled the quick commercial expansion of Cuban music with arrangements of danzón orchestras, sextets of son cubano, and jazz bands Cuban-style. From Rita Montaner and Bola de Nieve to MiguelitoValdés, Antonio Machín, Julio Cuevas, Bebo Valdés and Armando Oréfiche. With them, Havana was a party. Half a century before the Buena Vista Social Club....Carlos Fuentes.