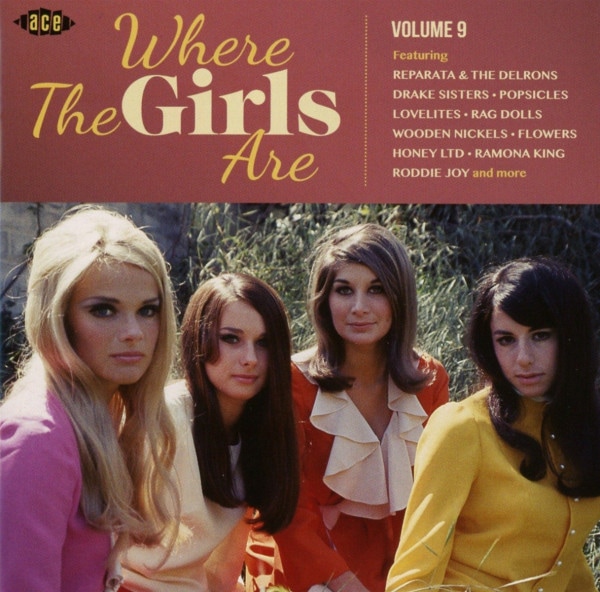 Various: Where The Girls Are Vol.9

(2016/ACE) 25 tracks with 16 page booklet.
A lush collection of 1960s US girl group sounds. Features many new-to-CD titles, including three previously unissued masters. The girl group canon contains many unsung heroines: talented singers who toiled behind the scenes on important recordings without achieving fame in their own name. There are a few here on the latest volume in our “Where The Girls Are” series. Jean Thomas and her group the Sweet Three, for example, here with ‘That’s The Way It Is (When A Girl’s In Love)’, also recorded under other names and provided backing vocals for various Philadelphia stars. By the early 70s she and her group were recording as the Mellow Moods for Gamble & Huff. As that Jean Thomas was to Philly, Jean Thomas of the Rag Dolls, here with ‘Society Girl’, was to New York. Jean sang on literally hundreds of sessions for some of the biggest names in the business and supplied incognito lead vocals on singles by many fictitious girl groups. For the girl group collector who has everything, we’re premiering three previously unissued tracks. ‘With A Kiss’, penned by the Brill Building team of Tony Powers and George Fischoff, will be familiar to some in a version by the UK’s Kiki Dee from 1966. It seemed unlikely that no US recording of the song could be found, until version by the Bluezettes was discovered recently amongst tapes from the AVI catalogue. Linda Parrish and Patti Valentine, better known as Cincinnati’s 2 Of Clubs, released five singles on the Fraternity label, all produced by Carl Edmondson, Linda’s husband. All was going well until the Edmondsons split up and Linda moved away, putting paid to plans for a 2 Of Clubs album. Among the tracks intended for the shelved LP is their version of ‘I’ll Come Running Over’, a Bert Berns song first recorded by Lulu. In addition to the 45s put out in their own name, the Blossoms –Darlene Love, Fanita James and Jean King – had others released under various aliases, including several as featured vocalists on 45s by top instrumentalists. This recently unearthed recording of ‘Moon Walking’ was made with guitarist/arranger Billy Strange for Era in 1966. As the group was signed to Reprise at the time, and Strange to GNP Crescendo, there’s no telling what pseudonym might have appeared on the label had Era put the record out. Other highlights include new-to-CD gems by the Drake Sisters, Evie Sands, the Popsicles (alias Ellie Greenwich in disguise), the Penny Sisters, the Flowers and Roddie Joy.(Mick Patrick)

Artikeleigenschaften von Various: Where The Girls Are Vol.9

Tracklist
Various - Where The Girls Are Vol.9 CD 1
01 The Sweet Three
02 The Rag Dolls
03 Diane Christian
04 The Popsicles
05 What A Lonely Way To The Summertime
06 Roddie Joy
07 Evie Sands
08 Honey Ltd
09 The Bluezettes
10 The Murmaids
11 Lena Calhoun & The Emotions
12 The Lovelites
13 2 Of Clubs
14 Reparata & The Delrons
15 Ramona King
16 The Jaynetts
17 The Francettes
18 The Penny Sisters
19 Christine Cooper
20 The Drake Sisters
21 The Popsicles
22 The Flowers
23 The Darlettes
24 The Wooden Nickels
25 The Blossoms With Billy Strange
Funktionale