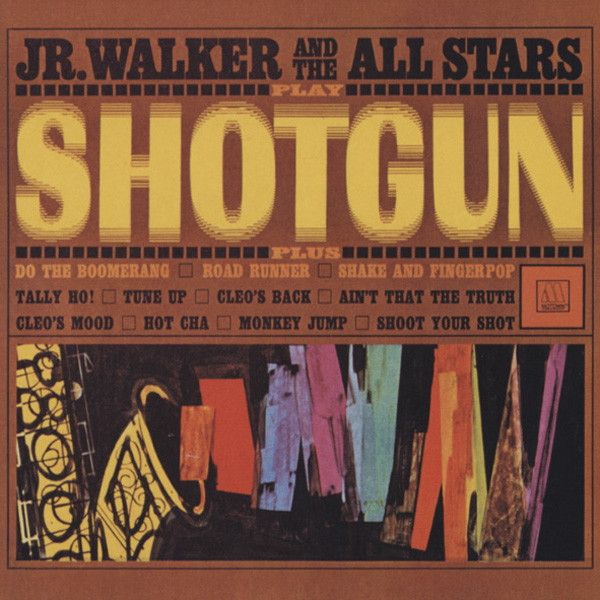 Junior Walker & The All Stars: Shotgun

Jr. Walker & The All Stars

Jr. Walker & The All Stars

Junior Walker hadn't planned on unleashing anything besides his high-register tenor sax the day he and his All Stars convened at Motown to cut Shotgun."That was the first song I ever sung!" said the late Walker. "We had a guy gonna come in to sing it, and man, that guy didn't show up. We went on, and Berry Gordy said, 'You guys come here and set this thing up!' I said, 'Yeah!' He said, 'I can't waste no more time with you. Go in there and record it.' I said, 'Well, we need a singer.' He said, 'You sing it then!' Everybody else said, 'You sing it! Get up there and do something!' So we went in there, and I got up there and sung it. I just hollered it, you know. Just went on through it like it should be. And I told the guy when we got through, 'We'll get somebody else. We'll bring somebody in.' He said, 'Man, I got what I want!'"

Inspiration had arisen from the sweat-stained dance floor at the El Grotto in Battle Creek, Michigan, where Walker and his All Stars gigged on a regular basis. "This dance kind of got to me," he said. "They was goin' across the floor like they was shootin'. So I called a couple of 'em, I said, 'What are you doin' now? What kind of junk is this?' The girl looked at me and said, 'Man, that's the Shotgun!' I said, 'The Shotgun?!?' They said, 'You better write a tune to that! That's what's happenin'!'"

It had been a long, hard road for Walker, who got his stage surname early in life. "They gave me that, walkin' to school,"  he noted. Inspired by Louis Jordan's jumping jive, he fell in love with the sax, digging everyone from Charlie Parker and Rusty Bryant to Stan Getz and Boots Randolph. Illinois Jacquet's stratospheric solo on Flying Home was indelible. "I started blowin' that high note, and I just went on up a little higher that what he was doin',"  he said. Johnny Bristol recommended Junior to Gwen Gordy and Harvey Fuqua's Harvey label, his '62 debut Twist Lackawanna and two instrumental encores preceding Walker's first 45 on Motown's Soul logo in 1964."I walked over to Motown and talked with Mr. Gordy," he said. "He said, 'Well, you want to cut records, huh?' I said, 'Yeah! I wanna blow a little bit!' So he signed me up, and the first thing I did was 'Monkey Jump.'" Once Shotgun exploded, Walker would fire lethal hits for close to a decade.