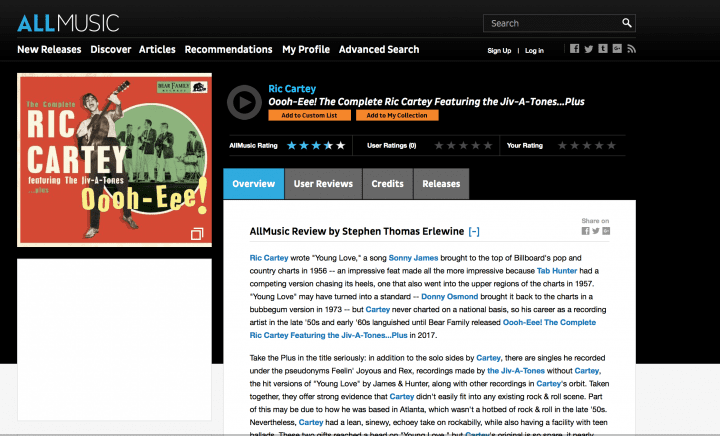 AllMusic Review by Stephen Thomas Erlewine [-]
Ric Cartey wrote "Young Love," a song Sonny James brought to the top of Billboard's pop and country charts in 1956 -- an impressive feat made all the more impressive because Tab Hunter had a competing version chasing its heels, one that also went into the upper regions of the charts in 1957. "Young Love" may have turned into a standard -- Donny Osmond brought it back to the charts in a bubbegum version in 1973 -- but Cartey never charted on a national basis, so his career as a recording artist in the late '50s and early '60s languished until Bear Family released Oooh-Eee! The Complete Ric Cartey Featuring the Jiv-A-Tones...Plus in 2017.
Take the Plus in the title seriously: in addition to the solo sides by Cartey, there are singles he recorded under the pseudonyms Feelin' Joyous and Rex, recordings made by the Jiv-A-Tones without Cartey, the hit versions of "Young Love" by James & Hunter, along with other recordings in Cartey's orbit. Taken together, they offer strong evidence that Cartey didn't easily fit into any existing rock & roll scene. Part of this may be due to how he was based in Atlanta, which wasn't a hotbed of rock & roll in the late '50s. Nevertheless, Cartey had a lean, sinewy, echoey take on rockabilly, while also having a facility with teen ballads. These two gifts reached a head on "Young Love," but Cartey's original is so spare, it nearly feels like outsider art in comparison to the hits. Which isn't to say Cartey didn't have showbiz instincts: his soda-pop ballads were designed with sock-hops in mind, and when he took an alias, it was the intent of selling a sound that he didn't want to put his name to, such as the hopping, jiving rock & roll from Feelin' Joyous and the dirty blues grind of Rex. Cartey also took a stab at silly, orchestrated pop in 1963 with a single carrying two sides written by Joe South ("Poor Me" is a sight better than "Something in My Eye"), but by that point his recording career had faded. Still, this single -- which derives from a different era than the rest, one that is more produced and goofier -- winds up being a fitting capper to this wild, rangy compilation: Cartey worked hard during his decade, coming up with a certified classic and a bunch of interesting artifacts, all of which can be heard here.