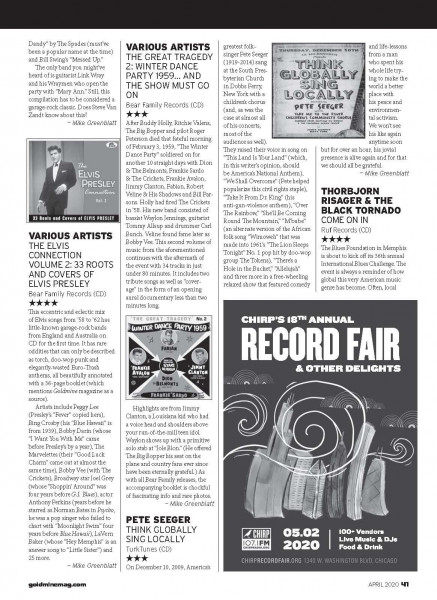 VARIOUS ARTISTS THE ELVIS CONNECTION VOLUME 2:
33 ROOTS AND COVERS OF ELVIS PRESLEY Bear Family Records (CD) **** This eccentric and eclectic mix of Elvis songs from '58 to '62 has little-known garage-rock bands from England and Australia on CD for the first time. It has rare oddities that can only be described as torch, doo-wop punk and elegantly-wasted Euro-Trash anthems, all beautifully annotated with a 36-page booklet (which mentions Goldmine magazine as a source). Artists include Peggy Lee (Presley's "Fever" copied hers), Bing Crosby (his "Blue Hawaii" is from 1939), B obby Darin (whose "I Want You With Me" came before Presley's by a year), The Marvelettes (their "Good Luck Charm" came out at almost the same time), Bobby Vee (with The Crickets), Broadway star Joel Grey (whose "Shoppin' Around" was four years before G.I. Blues), actor Anthony Perkins (years before he starred as Norman Bates in Psycho, he was a pop singer who failed to chart with "Moonlight Swim" four years before Blue Hawaii), LaVern Baker (whose "Hey Memphis" is an answer song to "Little Sister") and 25 more.
- Mike Greenblatt