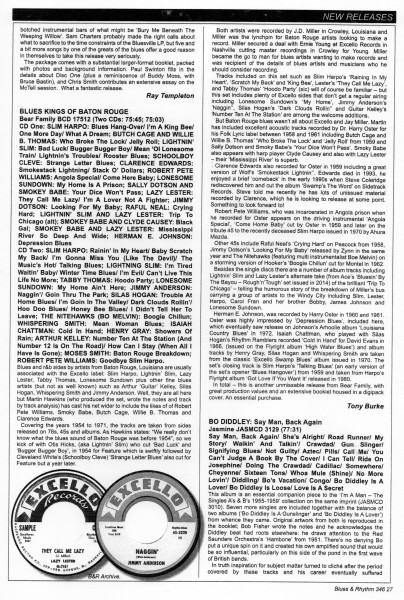 Blues and r&b sides by artists from Baton Rouge, Louisiana are usually associated with the Excello label: Slim Harpo, Lightnin' Slim, Lazy Lester. Tabby Thomas, Lonesome Sundown plus other fine blues artists (but not as well known) such as Arthur 'Guitar' Kelley, Silas Hogan, Whispering Smith and Jimmy Anderson. Well, they are all here but Martin Hawkins (who produced the set. wrote the notes and track by track analysis) has cast his net wider to include the likes of of Robert Pete Williams, Smoky Babe, Butch Cage, Willie B. Thomas and Clarence Edwards. Covering the years 1954 to 1971, the tracks are taken from sides released on 78s, 45s and albums. As Hawkins states: "We really don't know what the blues sound of Baton Rouge was before 1954", so we kick of with Otis Hicks, (aka Lightnin' Slim) who cut 'Bad Luck' and 'Bugger Bugger Boy', in 1954 for Feature which is swiftly followed by Cleveland White's (Schoolboy Cleve) 'Strange Letter Blues' also cut for Feature but a year later.

Both artists were recorded by J.D. Miller in Crowley, Louisiana and Miller was the lynchpin for Baton Rouge artists looking to make a record. Miller secured a deal with Ernie Young at Excello Records in Nashville cutting master recordings in Crowley for Young. Miller became the go to man for blues artists wanting to make records and was recipient of the details of blues artists and musicians who he should consider recording. Tracks included on this set such as Slim Harpo's 'Raining In My Heart', 'Scratch My Back' and 'King Bee', Lester's 'They Call Me Lazy', and Tabby Thomas' Hoodo Party' (sic) will of course be familiar — but this set includes plenty of Excello sides that don't get a regular airing including Lonesome Sundown's 'My Home', Jimmy Anderson's 'Naggin", Silas Hogan's 'Dark Clouds Rollin" and Guitar Kelley's 'Number Ten At The Station' are among the welcome additions. But Baton Rouge blues wasn't all about Excello and Jay Miller. Martin has included excellent acoustic tracks recorded by Dr. Harry Oster for his Folk Lyric label between 1958 and 1961 including Butch Cage and Willie B. Thomas' `Who Broke The Lock' and 'Jelly Roll' from 1959 and Sally Dotson and Smoky Babe's 'Your Dice Won't Pass'. Smoky Babe also appears with harp player Clyde Causey and also with Lazy Lester — their 'Mississippi River' is superb. Clarence Edwards also recorded for Oster in 1959 including a great version of Wolf's 'Smokestack Lightnin".

Edwards died in 1993, he enjoyed a brief 'comeback' in the early 1990s when Steve Coleridge rediscovered him and cut the album 'Swamp's The Word' on Sidetrack Records. Steve told me recently he has lots of unissued material recorded by Clarence, which he is looking to release at some point. Something to look forward to! Robert Pete Williams, who was incarcerated in Angola prison when he recorded for Oster appears on the driving instrumental 'Angola Special', 'Come Home Baby' cut by Oster in 1959 and later on the tribute 45 to the recently deceased Slim Harpo issued in 1970 by Ahura Mazda. Other 45s include Raful Neal's 'Crying Hard' on Peacock from 1958, Jimmy Dotson's 'Looking For My Baby' released by Zynn in the same year and The Nitehawks (featuring multi instrumentalist Boe Melvin) on a storming version of Hooker's 'Boogie Chillun' cut for Montel in 1962. Besides the single discs there are a number of album tracks including Lightnin' Slim and Lazy Lester's alternate take (from Ace's 'Bluesin' By The Bayou — Rough'n'Tough' set issued in 2014) of the brilliant 'Trip To Chicago' — telling the humorous story of the breakdown of Miller's bus carrying a group of artists to the Windy City including Slim, Lester, Harpo, Carol Fran and her brother Bobby, James Johnson and Lonesome Sundown.

Herman E. Johnson, was recorded by Harry Oster in 1960 and 1961. Oster was highly impressed by 'Depression Blues', included here. which eventually saw release on Johnson's Arhoolie album 'Louisiana Country Blues' in 1972. Isaiah Chattman, who played with Silas Hogan's Rhythm Ramblers recorded 'Cold In Hand' for David Evans in 1966. (issued on the Flyright album 'High Water Blues') and album tracks by Henry Gray, Silas Hogan and Whispering Smith are taken from the classic 'Excello Swamp Blues' album issued in 1970. The set's closing track is Slim Harpo's 'Talking Blues' (an early version of the set's opener 'Blues Hangover') from 1959 and taken from Harpo's Flyright album 'Got Love If You Want It' released in 1980. In total — this is another unmissable release from Bear Family, with great production values and an extensive booklet housed in a digipack cover. An essential purchase.
Tony Burke