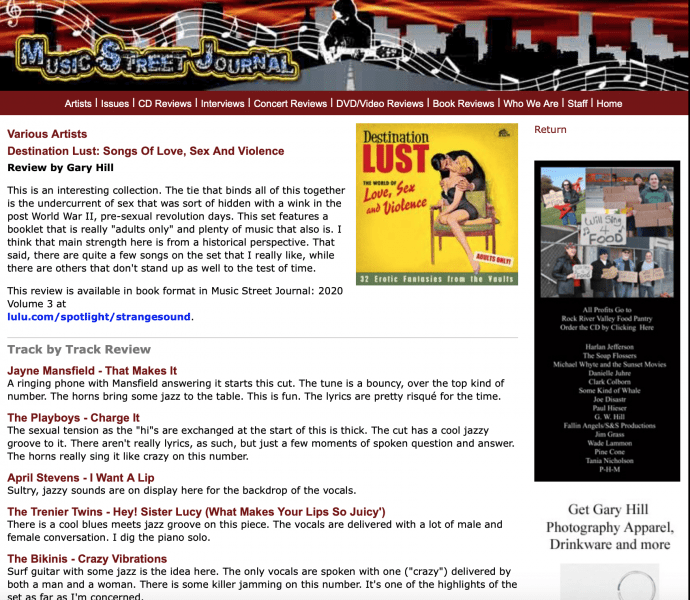 Review by Gary Hill
This is an interesting collection. The tie that binds all of this together is the undercurrent of sex that was sort of hidden with a wink in the post World War II, pre-sexual revolution days. This set features a booklet that is really "adults only" and plenty of music that also is. I think that main strength here is from a historical perspective. That said, there are quite a few songs on the set that I really like, while there are others that don't stand up as well to the test of time.

This review is available in book format in Music Street Journal: 2020 Volume 3 at
lulu.com/spotlight/strangesound.

Jayne Mansfield - That Makes It
A ringing phone with Mansfield answering it starts this cut. The tune is a bouncy, over the top kind of number. The horns bring some jazz to the table. This is fun. The lyrics are pretty risqué for the time.

The Playboys - Charge It
The sexual tension as the "hi"s are exchanged at the start of this is thick. The cut has a cool jazzy groove to it. There aren't really lyrics, as such, but just a few moments of spoken question and answer. The horns really sing it like crazy on this number.

April Stevens - I Want A Lip
Sultry, jazzy sounds are on display here for the backdrop of the vocals.

The Trenier Twins - Hey! Sister Lucy (What Makes Your Lips So Juicy')
There is a cool blues meets jazz groove on this piece. The vocals are delivered with a lot of male and female conversation. I dig the piano solo.

The Bikinis - Crazy Vibrations
Surf guitar with some jazz is the idea here. The only vocals are spoken with one ("crazy") delivered by both a man and a woman. There is some killer jamming on this number. It's one of the highlights of the set as far as I'm concerned.

April Stevens - Teach Me Tiger
The vocal performance on this is drenched in sex. The cut has a pretty mainstream early rock and roll ballad vibe to it. The "wah wah wah" thing is downright laughable.

Jim Backus & Friend - Delicious
This is basically a conversation over a piano trio arrangement. The laughter from Backus comes across as pretty creepy. It dissolves into full-on laughter later.

Miss X - Christine
I like this tune. It has a great jazz meets classical vibe to it. The vocals are kind of half-whispered in a sultry way. This is classy, if a bit silly.

Andrea Tosi - La Sorella Di Cristine
The vocals are whispered. The music has a cool almost surf guitar approach. This is an effective piece.

Elke Sommer - Be Not 'Notty'
Bouncy musical theater is on the menu here. It's a bit too silly for me.

Mamie van Doren - Separate The Men From The Boys
I dig the piano on this cut. The tune has more of that musical theater concept, but the bluesy jazz structure on this works well. This is a bit more serious than some of the rest.

Lola Dee and Rusty Draper - Scratch My Back
This is slow moving and very musical theater-like. It's not my thing, but it has some charms.

The Clovers - Love Potion No. 9
I love this version of the classic tune. It has some rock and roll and plenty of jazz in the mix. It's dated in sound, but also very classy.

Ann-Margret - Let Me Entertain You
I am sure that I've heard this song before. It has a real slow torch jazz arrangement to it. The vocal performance is sultry and strong.

Slim Gaillard Sextet: - When Banana Skins Are Falling (I'll Come Sliding Back To You)
This cut is a playful jazz piece. It has a cool groove, some tasty piano and great horn work. It's a party kind of number.

Rolls' Royce & The Wheels - Topless
A fun little rock and roller, this has conversation for the vocals. I love the classic guitar work on the piece. This is just so tasty.

Ruth Wallis - Long-Playing Daddy
Old-school jazz is on display here. The double-entendres are all over the lyrics of this.

Lizabeth Scott - A Deep Dark Secret
Sultry jazz is on display here. I'm not crazy about the backing vocals, but the whole sound and groove of this beyond that is pretty cool. There is a definite musical theater kind of tune.

The Revels with Barbara Adkins - Intoxica
Weird laughter, joined by the sound of glasses being filled opens this piece. The cut has a great surf guitar riff-driven approach to it. The honking saxophone is classy stuff. There are some spoken bits that have a laugh approach to them. This has some tasty piano in the mix, too.

The Fiestas - I'm Your Slave
Gospel vocals are on display here. There are some cool guitar fills at times, but the main musical concept is delivered on piano.

Bobby Towers - Bondage of Love
I dig the cool jazz meets rock and roll vibe of this. It has a good energy and groove to it. The horns bring a lot of style to it.

The Frantics - The Whip
This instrumental is a classy surf guitar type piece. Suitably the cut features a cracking whip throughout much of its duration.

John & Jackie - Little Girl
Very much an old-school rock and roller with theatrical elements, I can't believe that they got by with some of the female vocalizations on this. Let's just say that it sounds like she's enjoying the song.

Cozy Cole & The Love Orchestra - Bad
Other than the title being mostly spoken at the start, this is an instrumental. The instrumentation lands as more of a jazz band, but the music has a lot of surf meets old-school rock and roll in it. This is another highlight of the set.

Richard Marino & His Orchestra - Fever
This is a classic number, and I really enjoy this rendition of the tune. It oozes cool in a jazz arrangement.

Bobbie Bolden - Hall Of Shame
This is a jazzy kind of groove with some definite musical theater in the mix. I like the sultry, bluesy vocal performance on this thing. This is another standout.

Enoch Light & The Light Brigade - Blonde Bombshell
I love the cool surf guitar meets jazz sound of a lot of this number. This is another instrumental. It gets into a full musical theater treatment further down the road. That section features some cool guitar soloing.

David Rose & His Orchestra - The Stripper
This jazz stomper is the classic old-school burlesque piece. I'm sure you've heard it. It's a killer instrumental that works well.

Miss X - S-E-X
Percussion brings this into being with a bit a Latin vibe. Piano joins. Then the vocals come in to create the picture. This is a fun romp.

Pat Morrissey - Why Don't You Do Right
Bass and finger popping start the tune. The cut has a sultry, bluesy treatment. There is piano as the cut continues, but the overall tone just gets accentuated, rather than changed. This is another highlight of the set.

Jayne Mansfield - Let's Do It (Live)
The jazz stylings of this are classic. This number is very much of that classic variety. It feels very much like an old-school Vegas production. Of course, that's because it was recorded in 1961 in Vegas. While this has its charms, it's a bit over the top.