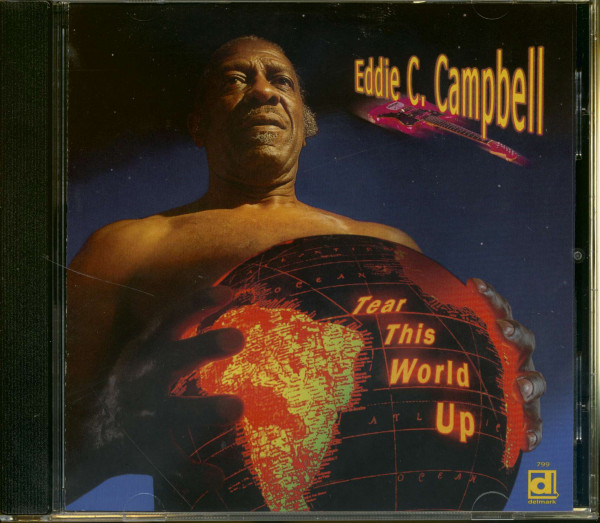 There Aren't Many Of The Rues Guitar Giants Left
who once freely roamed Chicago's West Side, spraying off reverb-soaked shards of notes on their axes while piercing the night air with their tortured vocal cries. We're fortunate indeed to have EDDIE C. CAMPBELL still with us. performing absolutely at the top of his game.

Spider Eating Preacher is Eddie's second Del-mark release. Its predecessor. 2009's Tear This World Up. was nominated for a Blues Music Award as Album of the Year. This set's just as singular, full of quirky originals that could only come from Campbell's corner—sometimes created in cahoots with his wife. Barbara Mayson. In fact. the entire album is a family affair. Barbara. who also man-ages her hubby, plays bass on half a dozen tracks. Their son David contributes violin on two. Further, Barbara wrote the highly distinctive title track (about her blindness). "It fit me. and I said. 'Yeah. I like it!' So we did it. She usually helps me write mostly all of my songs." says Campbell. "We usually go to the kitchen and sit down and eat. and come up with some ideas on songs.-

As was the case last time, veteran producer Dick Shurman was at the helm. "Eddie and I have been friends for over 35 years now and he calls me
his brother, so working with him is special." says Shurman. "It's also extra interesting because they only made one like him: he's a master of the tradi-tion and one of the few original 'West Side' stylists still doing it. and superbly. but his vision is unique. So is the .011 G string he uses on his Jazzmaster." Backed by his working band apart from drum-mer Robert Pasenko ("I saw him at Legends.- says Eddie. "I wanted him to play on the album with me"), Lurrie Bell's keyboardist Darryl Coutts. and on four tracks. the crisp horn section from Guy King's Little Big Band, Eddie rips through "I Do," "Boomerang." "Downtown," and "Been Gone A Long Time." On "Call My Mama and "My Friend (For Jim O'Neal).- he doubles on harmonica for the first time on record. "It was sort of funny when I wrote it," he says about "Call My Mama." "When you're real young and you're coming out in the world, and especially if you've got a lady older than you. she'll teach you a whole lot of things!" "I Don't Understand This Woman" is cut from similarly droll cloth. "It's good to sit back and listen at 'em talk. but when they finish. you still don't understand!" he laughs. Throughout. the sizzling grooves never let up.

"He's his own best rhythm guitarist and a song to him is like a clock: he hears all the parts (often based on the standard Jimmy Reed or Howlin' Wolf guitar roles) working together. and of course there's a lot of funk in with his gutbucket Mississippi blues base." says Shurman. "This CD has even more origi-nality than the last: he's refreshingly determined to do largely his own music. It's also the most Eddie has ever been given the indulgence (thanks to Delmark as much as my longtime friendship with Eddie and his family) to Be Eddie." I came up with a lot of wild songs that I'd just like for the people to hear." Eddie says. -Soup Bone" was one of Campbell's first 45s. but this remake is so different that Shurman added a parenthetical "(Reheated)" to its title. "I wanted to feel how people react when they're hungry." says Eddie. "When you're hungry. especially if you've got about two or three dollars in your pocket and you go in a res-taurant. you want everything. And then after you get a little bit. you're full and you didn't really want nothin'!"

The set represents a reunion for Eddie and his godson. guitar master Lurrie Bell (Lurrie's dad. the late Carey Bell. used to play bass in Campbell's com-bo). "I put diapers on Lurrie," notes Eddie. "Lurrie was with us all the time. I'm one of the first guys he played with on the bandstand. so he has a couple of my licks." In addition to playing guitar on two full band tracks. Lurrie doubles on harp and vocals for the acoustic closer, "Playing Around These Blues." "My Friend (For Jim O'Neal)" is a tribute to the ail-ing former editor of Living Blues magazine. "We felt it was very important to show support for our good friend Jim O'Neal. as we did a song to, for. and about him and are dedicating the CD to him. along with Bob Koester and Elnora Jones." says Shurman. The covers are well chosen: Eddie revives Ricky Allen's -Cut You A-Loose" and Jimmie Lee Robin-son's "All Of My Life" (both late Chicago bluesmen were his pals). The Ohio Players' "Skin Tight" re-ceives a funky dusting off. "That was Dick's idea," says Eddie. "He remembered I did it a long time ago." Born in Duncan. Mississippi on May 6. 1939. Eddie arrived in Chicago at age six. His sister. Elnora Jones. was his first major influence.

"She made me stay on the guitar," says Campbell. "She made me play. try to play the tones that she was playing.- Her lessons obviously paid off: no less an icon than Muddy Waters invited Eddie to sit in at the 1125 Club when Eddie was just 12. Otis Rush and West Side kingpin Magic Sam later made indelible impressions. "I can play Sam note for note," says Camp-bell. "Sam lived right upstairs over me there for awhile. We used to go up to his house, and I'd hear him playing the guitar, and I picked up every lick that he would play. When I'd go down to the Alex Club, he would say. 'Oh, here Eddie is!' And he'd give me the guitar, and he'd sing the songs. "That's how close I knew Sam." Armed with the same purple Fender Jazzmas-ter that he plays today ("I like the feel of the neck"). Campbell made his mark on the competitive West Side scene.

He says he lost ownership on one of West Sider Freddy King's big instrumental hits. "I put some stuff on the recorder down there at King Records," claims Eddie. "About two or three months later, I heard him playing my 'San-Ho-Zay.'" Campbell was too busy paying his dues to cry over it. He played with harmonica genius Little Walter, spent four-and-a-half years behind Jimmy Reed, and tried unsuccessfully to please Howlin' Wolf on the bandstand. "He was a rough man to play with," says Campbell. Eddie's first few singles as a leader came out on his manager Jay Banks' tiny Hawaii and Sky-way labels approximately four decades ago (he re-visited one of them, "All Nite," on Tear This World Up). He didn't emerge as a genuine force until 1977, when Steve Wisner's Mr. Blues Records unleashed his debut LP, King of the Jungle, while Campbell was a member of Willie Dixon's band (its cover photo was snapped at Brookfield Zoo; Lurrie played bass on two tracks). The set featured the Yuletide gem "Santa's Messin' With the Kid," later covered by Lynyrd Skynyrd.

"It turned out to be a classic," Eddie says. From 1984 to 1992, Campbell lived in Europe. "I was just trying to get myself together, and then they started booking me over there," he explains. Eddie's return to the Windy City was met with open arms. He's headlined the Chicago Blues Fes-tival, cut more albums, and assumed his place as one of the city's revered blues elders, never con-tent to lean on past triumphs. "I think it's great that at 72, Eddie's chops and creativity are totally undiminished," says Shur-man. Campbell sees it in more streetwise terms. "The main thing is trying to survive out here," reasons Eddie. "If you're weak, you don't make it. If you're strong, you're still here." This album is one of his strongest yet. —BILL DAHL 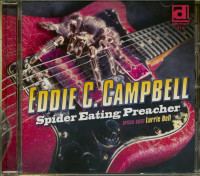 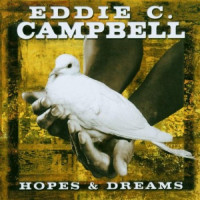