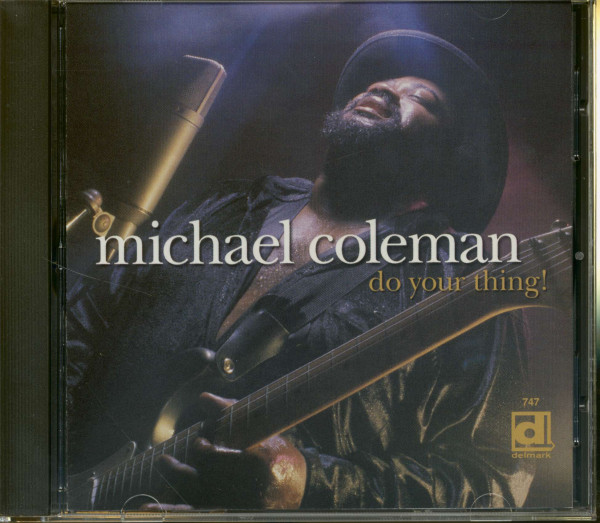 Michael Coleman: Do Your Thing!

One of the hottest guitar slingers in Chicago, Michael Coleman hits with his debut American release. In '79, at the age of 23, Michael joined James Cotton's band and stayed with him for seven years including two recording projects. Since then he's worked with Eddy Clearwater, recorded with Syl Johnson and has had several European albums of his own. The songs on this CD reflect Michael's varied influences; from Junior Wells' "Messin' With The Kid" to Isaac Hayes' "Do Your Thing" to Jimi Hendrix's "Message of Love". Do Your Thing! is Michael's blues party record. With the raucous, kick-butt opener, "The Train", the groove is set. Michael then proceeds to blend tried and true lyrics with fresh arrangements to present a mix of traditional blues and rockin' soul that's sure to please.ky angehauchter und soul-beeinflusster Blues mit einigen Ecken und Kanten. Als junger Bluesmann hat er keine Probleme, verschiedenste Ideen schwarzer Musik in seinen Blues einzubeziehen. Spannend

CHICAGO MUSIC BUFFS eagerly anticipate to second weekend of June for two reasons. itst and foremost, that's when the city stages its -Irma] Chicago Blues Festival, bringing huts-reds of thousands of fans to Grant Park on the tkefront for four days of free live blues whether to weather cooperates or not (sometimes it's Drgeous, other times cold as hell). And if that 'eren't enough of an incentive to bring out-of-swners into our city, it's also when the Jazz ecord Mart hosts its annual Blues Brunch. Kicking off on Sunday morning prior to the nal day of the Fest, the eagerly anticipated event relcomes customers from near and far to wolf own a tasty continental breakfast while digging srough the JRM's massive inventory of CDs. cords, DVDs, and other assorted merchandise sr hidden treasures. You might even encounter a oted author or two signing copies of a new lues-themed book. And best of all, there's a free pricert featuring an all-star array of Delmark's tp blues artists going on the whole time. 2005's Blues Brunch was no exception to that syous tradition. Settling in as house band was lichael Coleman & the Backbreakers, whose 000 Delmark album Do Your Thing! no doubt lined many a listener's head as he tackled verything from stone-cold blues to Otis .edding's "(Sittin' On) The Dock Of The Bay." orn on Chicago's West Side, Michael's daz-ling guitar technique began taking shape at ge eight. A stint backing Johnny Christian pre-eded Coleman's first big break in 1979, when e joined harp master James Cotton's combo ,r a seven-year stretch. Michael's crisp guitar ,chnique and burnished vocals are heard here 3 fine advantage on a moody "The Sky Is Crying" that's well removed from Elmore James' original and a funk-powered rendition of Sammy Fender's "You're Going To Miss Me."

Inaugurating the festivities was veteran harpist Little Arthur Duncan. a West Side fix-ture for eons who made one of his finest recorded statements on his 1999 Delmark disc Singin' With The Sun (original source of his tough "Knockin' On Your Door"). Born in Indianola, Miss. (one of B.B. King's pre-star-dom hometowns), Arthur hit Chicago during graces this set as he rips into B.B.'s "I Need You So Bad" and Lowell Fulson's "Reconsider Baby," punctuating his gruff vocals with glistening licks. Perhaps no one on the contemporary Chicago blues scene understands the beauty of flawless ensemble playing like Willie Kent. Blessed with a booming, goosebump-inducing voice that exquis-itely complements his perpetually in-the-pocket bass work, the Mississippi-born Kent made four CDs for Delmark during the 1990s, commencing with his sparkling '91 release Ain't It Nice. His herself, piano patriarch Sunnyland Slim took her on as a protege. She first waxed "Sad & Evil Woman" for his Airway imprint in the mid-'70s.

Now living in the Bay Area. Steve Freund was Sunnyland Slim's last ace guitarist, his con-ception deeply traditional yet modern and chal-lenging. The Brooklyn native hit Chicago in the mid-'70s, soon joining Sunnyland's band. Steve made his first Delmark disc. "C" For Chicago. in 1999, encoring with I'll Be Your Mule two years later. In 2004. Freund and his one-time where the bug probably hit me." Zora has done her best recorded work for Delmark in the new millennium: Learned My Lesson in 2002 and her recent encore Tore Up Front the Floor Up. where her sly original "Toxic" debuted. Delmark has boasted blues and boogie piano immortals aplenty over the decades, from Roosevelt Sykes and Little Brother Montgomery to Speckled Red and Curtis Jones. Steve Behr follows in their fabled footsteps by paying trib-ute to a hallowed boogie pioneer on his rippling the '50s but largely flew under the radar screen on a national basis until relatively recently. What a remarkable professional turnaround Lurrie Bell has made over the past decade. He's now assumed his rightful place as one of Chicago's top blues guitarists, fulfilling all the promise he first exhibited during the late 1970s behind his dad, harmonica master Carey Bell.

Lurrie developed into a mainstay of the Delmark roster, cutting four albums for the label during the latter half of the '90s, begin-ning with Mercurial Son and culminating with Blues Had A Baby. A double helping of Lurrie trophy case at home bursting with Handy Awards. Willie gave Blues Brunchers "Something New" to deliciously accompany their vittles and coffee. Bonnie Lee has guested with Willie and his Gents for decades, both on the bandstand and in the studio. She was nicknamed "Bombshell" on her early '60s debut single "My Man's Coming Home" for J. Mayo Williams' Ebony label, but the title of Bonnie's 1995 Delmark album Sweetheart of the Blues is closer to the mark. Bonnie arrived in Chicago in 1958 from the Gulf Coast. After making a local name for guitar pupil (and longtime Delmark mainstay) Dave Specter teamed to cut the jazzy, swinging Is What It Is. Its lead track was the satisfying Freund original "My Little Playhouse."

Few of Chicago's blues queens came up singing soul on the early '70s chitlin' circuit the way Zora Young did. Born in Mississippi but mostly raised in Chicago, the gospel-trained belter even-tually gravitated to the blues, which she'd encountered in her youth wafting out of Theresa's Lounge. "You'd either come from church, or come from school. and walk by Theresa's. and you hear this music," she recalls. "I think that's "Memories Of Albert Ammons," which he first did on Jim Beebe's Chicago Jazz album Saturday Night Function. Behr first surfaced on record playing the 88s behind legendary jazz drummer Barrett Deems and trombonist Jim Beebe during the late '70s. Like Zora Young, Shirley Johnson was brought up on a nourishing diet of gospel music. though she soaked up soul and blues whenever she could as a little girl growing up in Norfolk, Va. That's where she eventually kicked off her professional career as a secular singer. opening for Aretha Franklin and Z.Z. Hill ... 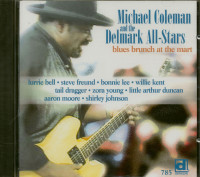