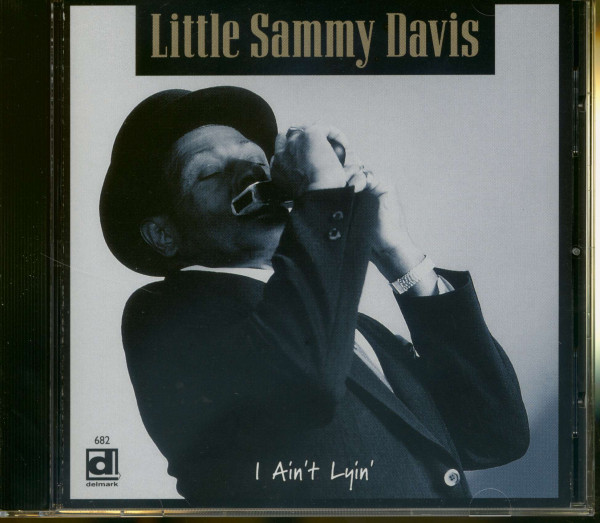 
Don Imus is the host of the syndicated radio talk show, Imus In The Morning, now carried in over 70 cities reaching some 20 million listeners. Also known as the author of the best selling comic novel God's Other Son, the 'I-Man' comments on Little Sammy and the band:

'The two most unlikely people to be in the same band, or for that matter, in the same room together, are Little Sammy Davis and Fred Scribner. Little Sammy, who is a blues singer in the tradition of the great Jimmy Reed, Howlin' Wolf and Muddy Waters looks like a blues singer although he tells me he's never been in jail and does not have a drug habit. He does, however, have more harmonicas than teeth. And the broken-hearted women Sammy's left along the way easily outnumber his harmonicas. Women, I might add, who probably still like him about as much as I do. Which is a lot.'

Sam Davis was born in Winona, Mississippi on November 28, 1928. Winona is in the hill country. about 16 miles from the start of the Delta, situated south of Grenada and east of Greenwood. Established in the early 1860s, Winona grew into a thriving community, re-plete with cotton farms and a timber industry. Sam received his first harmonica from his father and started playing the harp at the age of 8. While growing up, Sam heard the records of Tommy McClennan, Blind Boy Fuller, Peetie Wheatstraw, and one of his favorites, John Lee Williamson. Davis' father left the family fold early on, and sometime after that, his mother headed for Detroit. Sam was raised by his grandmother. At age 15, Sam's ticket out of Winona was on the back of a chicken truck headed for Vicksburg, Mississippi. In Vicksburg, Sam hung out with an older crowd, impressing them with his version of John Lee Williamson's "Good Morning Little School Girl." Sam knew how to 'get the money flyin' by blowing the harp through his nose (a trick he still performs on stage today). Due to the "hard times" of working in Mississippi's sawmills and cotton farms, Sam headed for Florida, where he found employ-ment cutting logs and working in orange groves.

Florida was where he met Earl Hooker, Ike Turner, Jackie Brenston, and Johnny O'Neal. According to Sam, "Earl was hard to beat as a guitar player." In Miami, during 1952, Little Sam Davis recorded four sides with Earl Hooker on guitar and "Tony" on drums for Henry Stone's Rockin' label. (These four sides can be found on an out-of-print Nighthawk LP; one of these sides is also on an out-of-print Mamlish LP.) Sam also spent time in Pahokee, Florida, where sugar cane is the main crop. Pahokee is in Palm Beach county 45 miles west of West Palm Beach and on the southeastern side of Lake Okeechobee. Sam "worked down in the muck" picking beans and cutting sugar cane. During the mid-to-late 1950s, Sam hooked up and toured with Guitar Slim and Jimmy Liggins around the Pahokee area. In between Davis' tenures in Florida, he headed North to Chicago in 1953. In Cairo, Illinois, he was reunited with Earl Hooker and came into contact with Joe Willie "Pinetop" Perkins. While in Chicago, Sam hung out and played with Eddie Boyd, Muddy Waters, Jimmy Reed, and another one of his favorites, Little Walter. Speaking with me recently, Sam's voice became hushed as he reminisced about Little Walter: "...Little Walter was a good man... he was a good guy, as far as I'm concerned.-

Davis eventually traveled to New York State and settled in the Hudson Valley city of Poughkeepsie. Pete Lowry rediscovered Sam and subsequently recorded him, issuing a 45 on the Tr-ix label. Sam also blows harp on Eddie Kirkland's "The Devil and Other Blues Demons", which was recently reissued on a Trix CD. After his wife's death from cancer, Sam dropped out of the music scene and vanished. Then, in 1988, Wade Faircloth provided information on Sam's whereabouts. Sam eventually started performing again in Poughkeepsie at some of the blues jams, and the locals ate it up. These Days... Through the efforts of Fred Scribner, Sam's close friend and guitar player, Davis has had a great band supporting him: Fred's brother Brad on drums, and until recently, Brad Lee Sexton on bass. (Brad Lee Sexton, always an anchor with his steady beat, succumbed to a heart attack during the July 4th weekend of 1995.)

Sam is living in Orange County, N.Y. Whether it's performing at charity benefits with Don Imus, playing at venues in Man-hattan, or going to California to receive the "Little Walter Lifetime Achievement Award", Sam Davis is a humble, sweet gentleman who always devotes 110% of his energy and talent to make you feel good. Sam's club repertoir consists of material ranging from Sam Cooke. Slim Harpo, Muddy, Ray Charles, and Little Walter, in addition to the stunning originals heard on this CD. I Ain't Lyin' conjures up heavy links to the sounds of the prewar Mississippi Delta, classic 1950s Chicago blues, a bit of jiving like Louis Jordan, and even a great touch of soul. Don't just take my word for it-Little Sammy Davis wouldn't lie to you! — Douglas A. Price; WVKR,