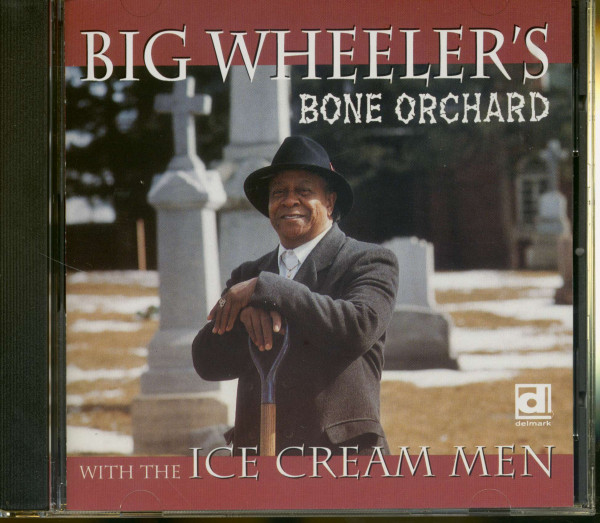 Chicago blues vocalist and harmonica player Golden "Big" Wheeler had his own band in 1956, but worked a day gig as he floated in and out of the music buisness for the next thirty five years. Now music comes first. Wheeler and the Ice Cream Men are dedicated to the traditional blues form; their purpose is to return to the 50's style of playing.

An acoustic guitar ringing in the country night was Golden "Big" Wheeler's first exposure to the blues. He was born December 16, 1929 in Beaconton Georgia. When he was about four Bubba Wilson came by his house, playing the guitar and singing the blues as he courted a woman who lived in the house, making the young and tender hearted boy feel good. As a young man driving a cab, Wheeler became interested in harmonica when Buster Brown would catch his cab to make his gig at WALB, a local radio station. Brown would play and sing in the cab, and tried to persuade Wheeler to play. Wheeler wasn't interested in performing yet, but he did buy a harmonica, an Old Stand By, and taught himself to play "That's Alright."

Golden Wheeler left Georgia in 1941, and after a few years in New Jersey and Ohio, came to Chicago at the time that blues was being played in every street corner tavern on Chicago's vibrant south and west side ghettos. When his brother-in-law took him out to hear the blues, Wheeler heard Little Walter playing at 38th and State. That spare, down to the bone sound Wheeler heard, with the harmonica, two guitars and the drums, is the sound that he and the Ice Cream Men have recreated on Bone Orchard. Little Walter and Golden Wheeler soon became friends. Wheeler says that Little Walter taught him more about the street than about music, "I would get into trouble and he would come and get me out. All I had to do was call him and he would come.

The only thing he taught me about the secret to the harmonica was anything you hear on horns, try to play it. "Walter was a big influence on me." After going to a house party in 1955 Wheeler decided he wanted to play professionally and by 1956 he had his own band consisting of Big Red (Walter Smith), Donald Griffin and Johnny Swan. Their first gig was at Curtsy's Lounge. He also played house parties with Little Eddie King, Willie Black, and his brother James Wheeler. Wheeler was then in and out of music for the next 35 years, working as a mechanic to feed his family. "I didn't think I could feed my kids on, 'We're not working tonight'." He is now retired from his day job and his music comes first. He is a true bluesman, steeped in the tradition that created the sound you will enjoy on this disc.

The Ice Cream Men were born in a different time and into a different culture but the spirit of the blues is as important to them as it is to Golden Wheeler. The group first got together in 1980 to back veteran bluesman Smokey Smothers and chose
their name because Smothers was an ice cream man. The group consists of drummer Steve Cushing, host of WBEZ's Blues Before Sunrise , Scott Dirks on harmonica, Dave Waldman and Johnny Burgin on guitars (Waldman plays lead on all but one tune). Scott Dirks doesn't play on this recording, but helped out with the production of the disc. Cushing started the group with Dave Waldman who the played harmonica. They are dedicated to the old style of playing that used two guitars rather than a guitar and a bass. They wanted a more fluid sound; Cushing wanted to create a wall of sound with the drums. Dirks even brought in old amplifiers to get that old sound.
Waldman says, "What we're trying to do is get the sound the bands had in the 1950s, more of a tightly knit sound.

That's the way a harmonica should be backed." This disc succeeds in recreating the sound that Wheeler's mentor and friend, Little Walter created with the Aces. Wheeler's harmonica is strong and full of feeling and the band finds its groove and accompanies Wheeler by weaving itself around the harmonica and vocals. Cushing wrote four-of the songs: Bad Bacon, Hell Bound Man, Katie's Blues, and the title cut, Bone Orchard, which raps about a wrong-doing lover's trip to the graveyard: You can moan down in the mud. You can cry down in the clay. You might raise some sand, But you'll stay right where you lay.

Hell Bound Man is a poignant song evoking the spirit of Little Walter in both lyrics and music.
The music takes us back to another time and place and succeeds in doing what Golden Wheeler thinks the blues should do: "It's an uplift. It makes you feel good, happy. Like spiritual music, it's an uplift. It's a story that you tellin' of everyday life. Whatever you hear in the blues, somebody have experienced it or you have. It's just that simple. I think the blues have brought a lot of people closer." Bone Orchard brings us closer to a time when the lyrics and music were more important than a loud sound or eighty notes being played where twenty said plenty. That's fine by me.
Lois Ulrey Editor, Magic Blues Magazine