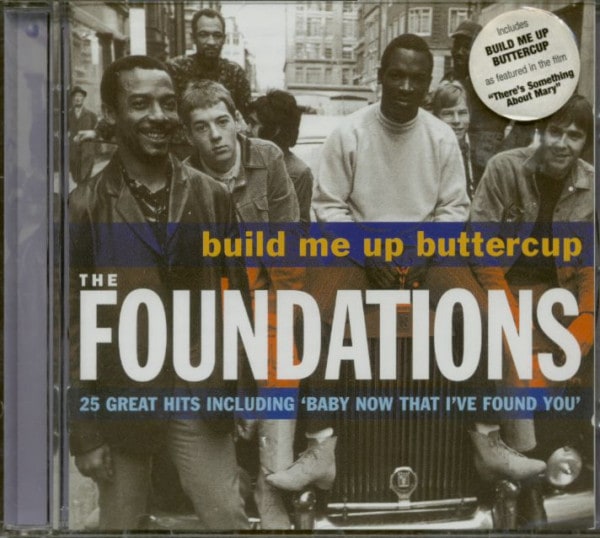 FOUNDATIONS: Build Me Up Buttercup (CD)

CD on CASTLE RECORDS by FOUNDATIONS - Build Me Up Buttercup (CD)

Along with all the barnstorming American luminaries that visited its shores during the '60s, Great Britain cultivated its own feisty R&B club scene. Jimmy James & The Vagabonds and Geno Washington & The Ram Jam Band made some reasonably convincing if mostly derivative soul for English consumption. The Foundations looked like the United Nations when they strode onstage, and they trafficked in bouncy, Motown-tinged pop-soul from their U.K. homebase.

When The Foundations formed in January of 1967, they were eight strong, ranging in age from 19 to 38. Lead singer Clem Curtis hailed from Trinidad, saxists Mike Elliott and Pat Burke came from Jamaica, keyboardist Tony Gomez from Sri Lanka, and guitarist Alan Warner, bassist Peter Macbeth, drummer Tim Harris, and trombonist Eric Allan Dale were local products. They rehearsed in a coffeehouse basement, rocking its foundations (thus their name). Manager Barry Class asked 23-year-old Pye Records staff writer/producer Tony Macauley to check out his clients; they impressed enough to rate a Pye pact. Macauley and John Macleod polished off the insistent Baby, Now That I've Found You for their debut single and were rewarded with a U.K. chart-topper that proved a U.S. pop/R&B smash on Uni.

The encores Back On My Feet Again and Any Old Time (You're Lonely And Sad) didn't do nearly as well, leading to dissension in the ranks. Curtis and Elliott quit, and new lead singer Colin Young, from Barbados, arrived just in time to front The Foundations' top stateside seller of all, the bubblegum soul anthem Build Me Up Buttercup, penned by Macauley and Manfred Mann lead vocalist Mike D'Abo. Buttercup missed the top of the U.K. hit parade by a slot, soaring to #3 pop in the U.S. without rating an R&B nod.

The Foundations' run was short-lived. They managed a couple of minor pop hits in 1969, still under Macauley's direction--In The Bad, Bad Old Days (Before You Loved Me) did much better on their home turf, and My Little Chickadee was only issued on 45 in the U.S., while Born To Live And Born To Die made a little U.K. chart noise. Their American tour in '69 was a disaster, and they broke up in the summer of 1970. Curtis subsequently waged a fairly successful solo career in Britain.