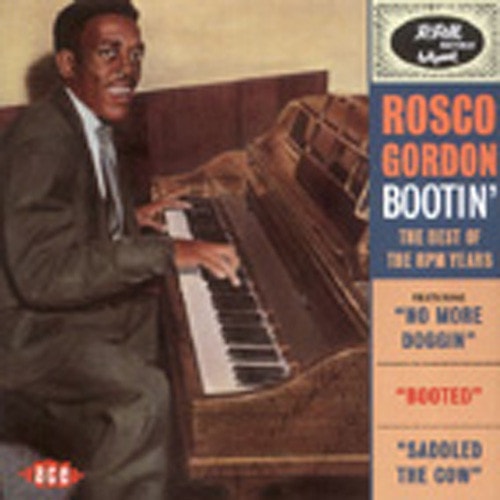 Roscoe Gordon: Bootin' - The Best Of The RPM Years

Get ready for a story of byzantine complexity. “It was Christmastime 1959,” said Jimmy McCracklin, “and I was playing in a Chicago nightclub. I ran into Rosco Gordon, and I taught Rosco one of my new songs, ‘Just A Little Bit.’” The two artists practised the song, said McCracklin, and Rosco wanted to record it. “I asked Rosco if I would get writing credit,” McCracklin told Howard DeWitt, “and he said, ‘Yes, Jimmy, you sure will.’ I didn’t get a damn thing.” Later, Rosco said that he’d developed the song from a one-liner by McCracklin. “That’s bullshit,” asserted McCracklin. “To this day, Rosco is nervous as hell when he sees me. He knows I wrote the damn thing.”  In yet another version of events, Rosco told Hank Davis that he wrote Just A Little Bit while on tour with Jimmy McCracklin, and, in an attempt to account for the fact that Ralph Bass and sundry others currently have the composer credit, he said that he recorded a demo which he offered to Ralph Bass at King Records. Bass, said Rosco, insisted that he wasn't interested, but copyrighted the demo in his name. Gordon then recorded the song for Vee-Jay, and it became his biggest pop hit (with a composer credit to his first wife Del Gordon).

So what actually happened? It’s likeliest that singer and songwriter Piney Brown (aka Columbus Perry) and two others wrote the song for Bass, who pitched it to Tiny Topsy for a 1959 session that predated Rosco’s by several months. What led McCracklin to insinuate himself in the picture? Well, Topsy’s record has a geeky Tequila-type rhythm, while the familiar Just A Little Bit riff can be found in embryonic form on an earlier McCracklin record, Country Baby, so it’s likely that McCracklin inserted the now familiar riff, rewrote a few words, and came to believe that he’d made a hit (which, in a sense, he had).

What’s certain is that this song became a valuable copyright because the Animals, Elvis Presley, Delbert McClinton, and a multitude of others have recorded it. This would be Rosco’s last R&B hit...some nine years after the first. Born in Memphis (not in 1934, as he often claimed, but on April 10, 1928), Rosco had already moved to New York, and within ten years he would exit the business until his rediscovery in the early 1980s. His death on July 11, 2002 was preceded by years of steady work and fresh acclaim, and his later records were barely less exuberant than the first.