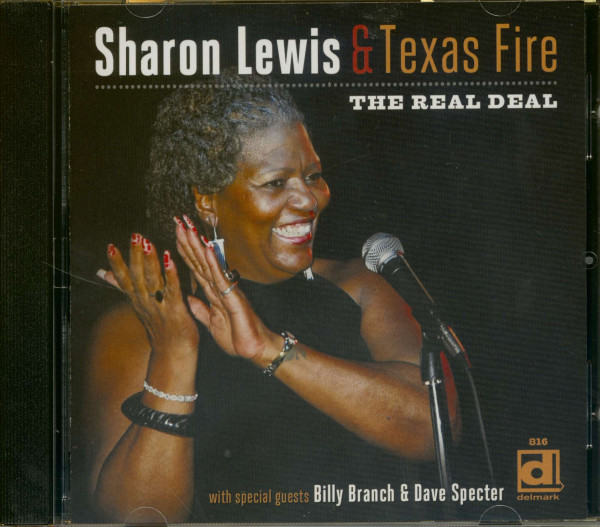 Sharon Lewis made her Delmark debut in 2007 as a special guest vocalist with Dave Specter on Live in Chicago (CD Delmark 794, DVD 1794). '...it's Sharon Lewis who provides the disc's most exciting moments. Her powerful pipes inject a strong gospel vibe into her originals 'In Too Deep' and the head-turning ballad 'Angel'.' -Blues Revue Born in Fort Worth, Texas, Sharon's earliest musical experience was as a member of a gospel choir. She moved to Chicago permanently in 1975 and became active on the Chicago blues scene in the early 90s. In 2005 Sharon formed her own band, Texas Fire. The Real Deal features new Sharon Lewis original songs and a few covers of songs she often performs in her live shows like Van Morrison's 'Crazy Love' and Bill Withers' 'Ain't No Sunshine'.

"Basically, I wanted the message to be about dealing with life — coping, surviving. And I think that in order to survive, you have to be real."
-SHARON LEWIS

"IT'S ALL BLUES IF IT COMES FROM THE HEART."
Sharon Lewis has lived enough, and survived enough, to know that labels and categorizations usually have little to do with real life, let alone real music. Nurtured as a young girl in a loving but strict religious household, in which the sole pur-pose of music was to praise the Lord and the sole purpose of life was to serve Him, she discovered the thrill of secular music ("Ahhh! Music could be joyful without going to hell! R&B! Motown! Sam & Dave! 'Hold On! I'm Comin'!' Oh my god!") after moving to Oklahoma from her native Ft. Worth. Texas when she was about nine years old. As Sharon grew up, her musical horizons con-tinued to expand— she met Ike and Tina Turner when she was sixteen, and they invited her to join their Revue as a dancer, an invitation she turned down — but she also began to encounter some of the "stumbling blocks" that her God-fearing grand-mother, Sister Maude Anna Bennett, would no doubt have counseled her to turn into "stepping stones" with the help of the Lord.

Over the next few years she got married. divorced, and then fled an abusive relationship, moving from Oklahoma to Chicago, back to Oklahoma, to California, and to Chicago again in the process. During all this time, she scarcely gave the blues a thought. "The perception I had of the blues.; she says, was, "You know, 'knock my woman down, gon' drag her back home by her hair: that kinda thing." But then one evening, she went to a club on the South Side of Chicago called Lee's Unleaded Blues, and saw vocalist Patricia Scott perform. "Oh, she turned my head around:' Sharon remembers. "She took every idea that I had formed about blues, and she removed 'em. Here's this woman up there—and a very handsome woman.

I might add, who seemed to have her shit together — talkin"bout what she's gonna do! 'Shot my man five times, they left him for dead / I stood over his head, raised my dress / and the man raised his head!' I'm tellin' you! I said, 'Sho"nuff!'" It wasn't long after that that Sharon gave her first musical performance at a picnic (she sang Ike and Tina's "Proud Mary:' which she called her"magnum opus" and which remains a highlight of her shows). and over the next few years she began to establish her-self around Chicago as an up-and-coming vocalist, fronting an eclectic, blues-rooted band called Under The Gun. By this time she had no problem with the word "blues:' but she was adamant that she'd define them — and sing them — on her own terms. Sharon's church background. her youthful

love for R&B and Motown, and her eventual intro-duction, courtesy of Pat Scott, to modern soul-blues all combined to give her a determinedly eclectic view of the music she had begun to embrace as her own. She's no less adamant today—which brings us to the title song, and the overriding theme, of this CD. "Blues purists get on my nerves:' she attests. "Thinkin' that if it ain't a one-four-five [chord pattern], lump-de-lump, lump-de-lump, that's not blues:' "When I say they ain't been where I've been:' she continues. "they ain't lived in my skin, they don't know how I feel—they don't. For somebody to just look at me and say I'm not a 'real' blues singer—you've lost your mind. You ain't been where I've been. You ain't lived in my skin.Y'know? And even if you read about me, you still don't know how I feel" Where Sharon has "been" might fill volumes,but she shares quite a bit of it on this CD.

Her song "Angel" limns some of the more harrowing depths. as well as some the more inspiring victories, she's experienced: conversely. the ironic bite of the top-ical "What's Really Going On?" brings a sardonic bluesiness to her take on the day-to-day chal-lenges of negotiating social and economic uncer-tainties, alongside personal and emotional travails. "The message in my songs:' she says. "is about life. I think a lot of blues songs are about struggle and overcoming, struggle and survival. You've got to understand that this is a struggle: just living is a struggle. But even more important-ly, the struggle comes when you decide to over-come.

I remember my pastor saying, 'You have to go through to get througn.' It's a hard thing. Basically, I wanted the message to be about deal-ing with life—coping, surviving. And I think that in order to survive, you have to be real." 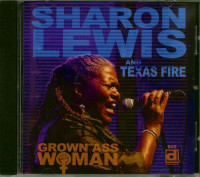