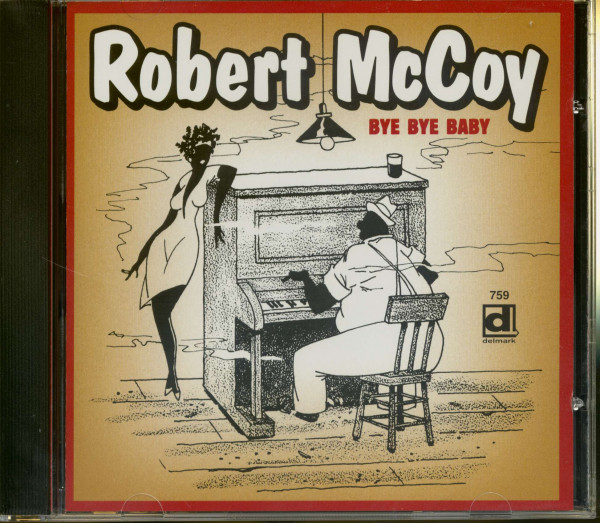 Alabama barrelhouse blues pianist Robert McCoy (born Aliceville 1908) had two rare LPs in the early '60s on the Vulcan label. Delmark has acquired the masters and is now re-issuing the material on CD for the first time with many previously unissued tracks. These were his first recordings as leader although he recorded in the '30s accompanying Guitar Slim, "Jaybird" Coleman and Peanut The Kidnapper. "Stomping piano solos and blues vocals played with ... vitality and authority. McCoy sets a happy and boozey pre-depression mood that is fun to share with him." - San Francisco Examiner. Bye Bye Baby contains more than an hour of pure blues piano delight!

Robert McCoy, born in Aliceville in 1908. was a mere three months old when his family moved to Birming-ham. His parents had been tenant farmers to whom the old spirituals and field songs were very familiar. The family settled in North Birmingham. a rather wild pad of town in which the rent party was an outstandingly ordinary event. Robert's older brothers, Johnny and Willie, quickly became interested in a now-primitive form of blues piano through their association with friends like immortals "Pinetop-Smith, "Cow Cow" Davenport and Jabo Williams, whom they had met soon after the move from Aliceville. Deeply influenced by the two older McCoys, Robert began acquainting himself with piano keyboards and gradually developed into a leading exponent of rent party styles by absorbing techniques he heard both "live" and on the abundant recordings by such notable bluesmen as Leroy Carr. By 1927 he had transferred his gift for blues improvisation into a highly specialized skill and was hired to play at dances and small clubs. His prominence gained him entrance to many of the inevitable rent parties and his mounting reputation as a performer of sensitivity and quality brought him recording dates on which he accompanied artists such as "Jaybird" Coleman and James Sherrell ("Peanut. the Kid-napper). Unfortunately, the lean years of the Great Depression brought an enormous decline to the record industry and Robert, like innumerable others, drifted into comparative nonentity. recording only on rare occasions. Over the following years he worked at various jobs, including that of construction laborer, and has now become a typical family man playing the piano mainly as a source of person-al pleasure. With this LP Robert makes his first serious return to the music he loves and so thoroughly embraces. — JOHN BENTLEY. 1963 excerpt from the original liner note to Vulcan 2501.