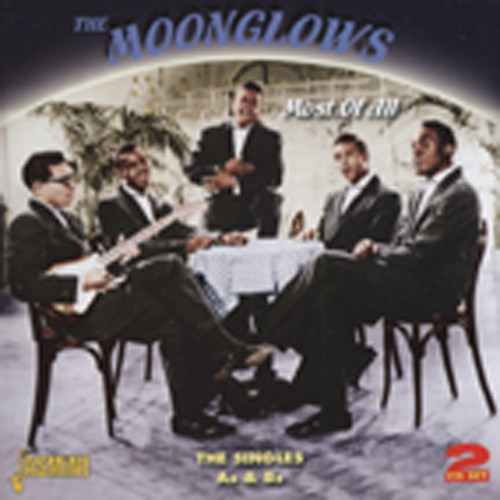 Artikeleigenschaften von MOONGLOWS: Most Of All - Singles As & Bs (2-CD)

Harvey Fuqua was still leading his Moonglows, but he'd turned the veteran group over. Bobby Lester, who fronted the Cleveland-based quartet on their "blow harmony”-powered smash Sincerely for Chess (you'll encounter it on our 1954 disc) and many more of their mid-'50s classics, was gone. So were bass Prentiss Barnes, tenor Alexander Walton (aka Pete Graves), and guitarist Billy Johnson.

Following the success of The Moonglows' '58 hit Ten Commandments Of Love, Fuqua cut 'em loose. He put out Chess solo singles simply billed as Harvey, including Don't Be Afraid Of Love (he lip-synched it in the 1959 film 'Go, Johnny Go!') and worked with Etta James as she developed into an interpreter of torch standards. And he transformed a Washington, D.C. group, The Marquees, into the new Moonglows.

The Marquees weren't without studio experience, having waxed Wyatt Earp for OKeh in 1957 with Bo Diddley's combo backing. Tenor Reese Palmer fronted both sides, backed by second tenor/baritone James Nolan, bass Chester Simmons (both formerly with The Rainbows), and young tenor/baritone Marvin Gay (the 'e' on the end of his surname came later). Simmons approached Fuqua about his group at the Howard Theater in D.C.; since the Moonglows were in the process of imploding, Harvey was happy to take the young group over. Dells bass singer Chuck Barksdale was added too.

The six-man outfit cut six sides for Chess in 1959 as Harvey & The Moonglows, the label issuing the rocking Mama Loocie - marking Marvin's first time as lead tenor - late in the year with a Fuqua-led Unemployment on the flip. But the liaison didn't last for long. By early '60, Nolan and Palmer were gone, Barksdale returning to The Dells. One more single later in the year, and Harvey mothballed The Moonglows.

Fuqua took Gaye up to Detroit, where Marvin signed with Motown and commenced a journey to superstardom. Harvey married Berry Gordy's sister Gwen and established the Tri-Phi and Harvey labels, eventually absorbed by Motown (Fuqua became a Motown house producer, later teaming with Johnny Bristol). Harvey remained an industry mover and shaker until his July 6, 2010 passing. Lester died in October of 1980, while Barnes passed October 1, 2006. Gaye was shockingly shot to death by his father on April 1, 1984.

8,29 €
Kunden kauften auch
Kunden haben sich ebenfalls angesehen
The Flamingos: I Only Have Eyes For You (CD) Art-Nr.: CDCOL1344