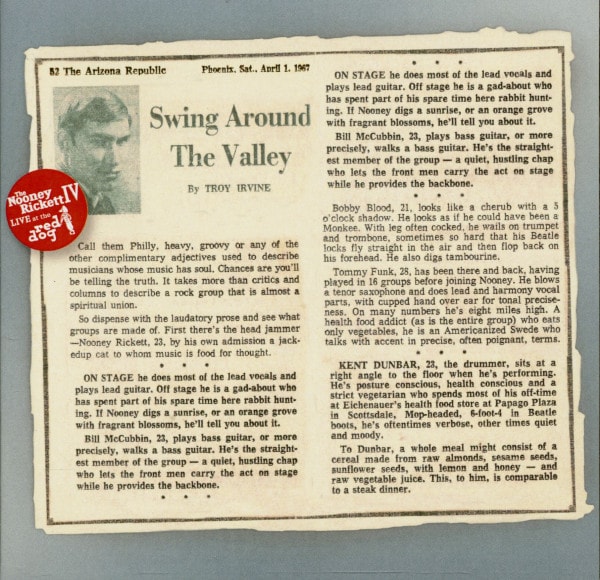 The Nooney Rickett IV: Live At The Red Dog A Go Go (CD)

(Red Dog Records) 20 tracks - digisleeve
Another Great Arizona Vintage Music Release !!!! This is a Limited Edition CD by the Nooney Rickett IV with 17 tracks recorded "Live At The Red Dog A Go Go" in Scottsdale, AZ. in January 1967, plus 3 bonus tracks recorded at Mr. Lucky's in 1971. This great album captures the in-person excitement of Nooney Rickett in his prime, with a great group of backing musicians and vocalists. The band covers Rock and Soul songs of the day with some great medleys. They even have an amazing Beatles/James Brown medley. Great harmonies and guitar work by Nooney throughout. Packaged in a gate-fold pocket CD with pictures and most informative notes by the Arizona Republic's Troy Irvine and Arizona's Music historian, John P. Dixon. Nooney played in Laughlin, NV. for years as Four Of A Kind. Produced and engineered by Ron Harkins and John P. Dixon. Originally released on Red Dog in 2015. The first pressing sold out. Re-released in 2019.